Freedom songs for the 21st century 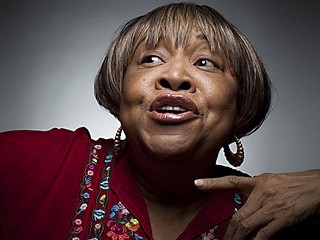 
Of all the pleasures modern technology brings, emailing with Mavis Staples proved an unexpected delight. Performing at the very first Austin City Limits Music Festival and a giant of the gospel field in her family band, the Staple Singers, she finally won her own Grammy for last year's You Are Not Alone, produced by Wilco's Jeff Tweedy. Staples writes that she's been "on that ["Freedom Highway"] ... and I will be there until Dr. King's dream has been realized.

"I had some long talks with Jeff before we started recording about what I wanted to do and how I was feeling," she writes. "And he took that and wrote the song 'You Are Not Alone,' which I think is so beautiful.

"He really captured how I was feeling and put it into a song. Just beautiful.

"We've recently started playing the song 'This Is My Country' in our shows. It's a song Curtis Mayfield gave to the Staple Singers back in the day, and I think it's really timely now. The message just fits where our country is right now. So we've been playing that, and we might consider that for a future record."

"We have a black president, so we have come a mighty long way. But this is why I still sing these songs, because there's still so much more to be done. My last record that I did with Ry Cooder was all freedom songs because we're not there yet. I see these Tea Party people and they're so angry, and they have signs with anger written on them. We've come a long way, but there's still a lot to be done. Girlie Action
A Christmas Cornucopia, You Are Not Alone, The Wind That Shakes the Barley (Record Review)