Coming down from the Ozark Mountains 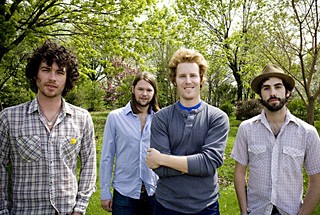 
Despite a name most people think is nonsense – try a Native American name for a Missouri state park near their home in the Ozarks – Ha Ha Tonka is a band on the verge of great things. The quartet's third album for Bloodshot Records, April's Death of a Decade, is gaining attention for its ceaseless verve, a brand of indie roots-rock shot between Neil Young's stark reflection and Paul Westerberg's punk posturing.

"We had a friend in Chicago who was booking the Double Door," prefaces vocalist Brian Roberts in regards to the band's signing with Chicago's home of insurgent country. "He was also in a band called Treaty of Paris who had a gig at the Metro and got us to play with them at a sold-out show. He also knows almost everybody in Chicago and got some people from Bloodshot to come out and see us. We had a good show in front of a big, basically young crowd.

"Afterward Bloodshot owner Nan Warshaw took us to the bar next door, where she got into an arm-wrestling match with Luke, our bass player. The combination of that show and the arm wrestling got us signed to Bloodshot."

Most recently the band was featured on the Travel Channel, appearing with superstar chef Anthony Bourdain in an episode about the Ozarks.

"Bourdain is a big fan of Daniel Woodrell, who wrote Winter's Bone. They wanted some music from the Ozarks, and we're from the same town as Woodrell, so it kind of made sense to have us on as well. They came up to Luke's parents' cabin, and we spent the whole day filming, drinking, playing cards, shooting guns, and hanging out with Anthony Bourdain.

"It was crazy, but he was really cool." 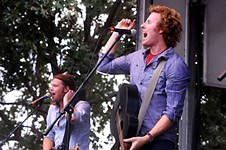