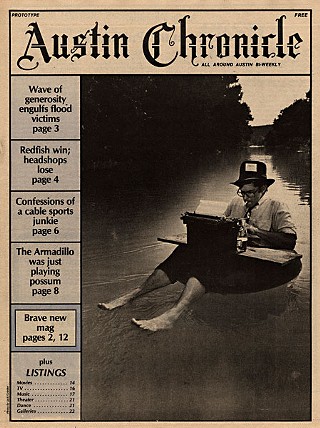 Waterloo Records and the Chronicle go together like the Beatles and the Stones. Both set up shop in the early 1980s and have played an integral role in supporting and shaping not only the local music scene but also each other. Owner John Kunz, who's being honored at Dart Music International's second annual Austin Icons Awards on Sept. 9, distinctly remembers that first issue of the then-biweekly Chronicle:

"I didn't know [Publisher] Nick [Barbaro] then, but there he was, the reporter with his typewriter lounging in an inner tube, floating down a Hill Country creek. He reflected what I felt about Austin – an engaged community, laid-back and connected to its environment.

"I did know [Editor] Louis [Black] then. I'd first read his film commentary during the CinemaTexas years. Later we'd hung out at clubs, record stores, and house parties. We'd rode down to San Antonio with Inner Sanctum's Richard Dorsett and my girlfriend Kathy Marcus to see the Sex Pistols (see "Holiday in San Antonio," Jan. 10, 2003). We made it back to Austin.

"I missed reading The Rag and the [Austin] Sun. I knew and respected Louis' take on music, film, and politics. I knew he'd be engaged, but probably not so laid-back. Maybe that other guy would balance things out?