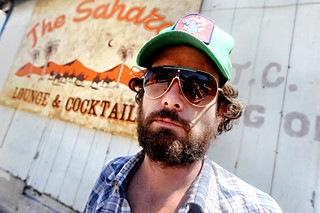 Aside from the new sign out front, not much differentiates the former TC's Lounge from the new Sahara Lounge (1413 Webberville Rd.). The revered East Austin juke joint, operated since 1978 by Thomas Perkins and featured in Friday Night Lights, still boasts the same pool tables, stage setup, and dive-bar aesthetic. The exceptions, of course, are the new owners behind the bar: local saxophonist Topaz McGarrigle; his mother Eileen Bristol, an electric bassist associated with the Austin Waldorf School; and her husband, Ibrahim Aminou, a West African percussionist and chef who leads their ensemble Zoumountchi. "It's a family business that we're trying to grow grassroots-style," offers McGarrigle (see "Papa's Brand-New Bag," July 27, 2007), best known for his jazz fusion group Topaz and the swamp funk of Mudphonic. That's certainly apparent in the Sahara Lounge calendar. Topaz's psych project, Hellfire Social, which just tracked a 7-inch with Cacophony Recorders' Erik Wofford, holds down alternating Wednesdays, while Zoumountchi headlines African night every Saturday. The Fabulous Thunderbirds' Moeller Brothers have taken over the popular Monday night residency – the Little Elmore Reed Blues Band has relocated to the Legendary White Swan Lounge – while DJ el John Selector hosts Chicken-Fried Soul on Tuesdays. While Perkins declined to be a part of the new operation, McGarrigle believes they're staying true to his vision for the bar. "This neighborhood and demographic is changing," he concludes, "but our dream and hope is to really integrate the new and old in this place." 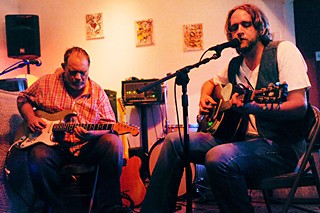 The Jon Dee & Friend Show upstairs in the Continental Club gallery on Sundays is more a sparring match than a song swap, with host Jon Dee Graham's interviewing skills cutting as sharply as his barbed lyricism and classic rock grit. Hayes Carll, dubbed the Prince of the Peninsula, took the hot seat last weekend, offering hilarious insight into the Crystal Beach characters behind "I Got a Gig," his devious day jobs (breast painter, vacuum cleaner salesman, Census Bureau worker), and the YouTube video of British soldiers in an LSD trial that inspired the title track to KMAG YOYO (& Other American Stories). Aside from Ray Wylie Hubbard stories ("How do you get bubble gum out of pubic hair?") and poignant ballads (Graham's "When a Woman Cries" and Carll's "Wish I Hadn't Stayed So Long"), Graham stumped Carll twice by calling for an impromptu guitar solo for Graham's "Big Sweet Life" and later by requesting parenting advice. "My mom told me I couldn't be a country singer," Carll deadpanned, "because I don't have the ass for it." A monthly, online edition of The Jon Dee & Friend Show is one of the perks offered in Graham's revamped JonDeeCo Co-op. For complete details, visit www.jondeegraham.com. 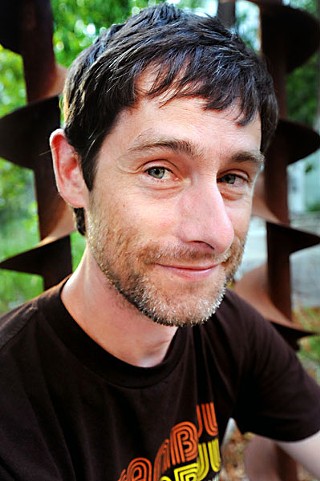 Before Sleep recorded its Stoned Age epic, 1993's Holy Mountain, co-founding guitarist Justin Marler left to pursue a more serious spiritual quest. In the midst of serious depression, he ventured to Israel "to explore the idea of Christ," a trip that led to a seven-year stint as a practicing monk at the Saint Herman of Alaska Brotherhood, an Orthodox Christian monastery where he published the influential zine Death to the World. "The parallels were really obvious when I showed up at the monastery," relates Marler, who relocated here in 2005 after publishing a travel guide on the area. "I thought the monks were the ultimate punks. They slept on boards and lived an austere life, completely denying the world as it is." More recently, Marler has focused on Shiny Empire, his spunky new pop-punk group with the Heavy Pets' Scott Phillips and keytarist Phil Davies. The band just cut some recordings at Jim Eno's Public Hi-Fi and headlines Stubb's indoors with Tom Melancon and Aqua Jones on Friday, Aug. 12. "Sleep fans should not even expose themselves to Shiny Empire," stresses Marler, a home inspector and energy auditor who currently practices at Saint Elias Orthodox Church. "They will hate it with a passion. And that's okay."

Now that radio is all but dead, seminal disc jockeys are being honored with "On the Air: Rock and Roll Radio," a new exhibit at the Rock & Roll Hall of Fame and Museum that features Austin's own Jody Denberg. An interactive kiosk displays Denberg's bio and a minutelong medley of his hand-picked greatest hits.

The archives of late Austin jazz beacon Tina Marsh have been accepted into the Austin History Center (810 Guadalupe). The collection, which features sheet music and business records for the Creative Opportunity Orchestra, can be viewed during office hours, Tuesday through Saturday, 10am-6pm, and Sunday, noon-6pm.

Following a headlining appearance at the Ecological Society of America benefit tonight (Thursday, Aug. 11) at ACL Live at the Moody Theater, Alejandro Escovedo takes off for a series of writing sessions with his niece Sheila E, Chuck Prophet, and producer Tony Visconti for the follow-up to last year's Street Songs of Love. "We're just getting started," offers Escovedo, "but we're going to do another session on South Congress."

Austin's Monofonus Press is taking the music industry grind into an unsettling new realm with Dry Hump: The Game, an interactive YouTube game doubling as a label sampler. Using embedded video links, users navigate scenarios and music videos in pursuit of, err, mutual friction. "It's a ridiculous project," says producer Morgan Coy, "but I felt like it was worth paying attention to." Play along in this week's Wednesday Rewind (austinchronicle.com/earache), but choose wisely. Blue balls are a bitch. 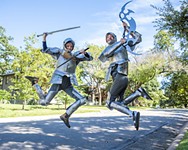