Geckos in the Elevator (Joe Records)

Geckos in the Elevator (Joe Records)


With opener "Lucky Penny," Jean Caffeine slides into a groove so familiar that Geckos in the Elevator tricks you into thinking this veteran rocker spent the last decade honing these 11 celebratory, confessional, autobiographical, and gorgeously patterned songs here in Austin instead of Durham, N.C. "Jane Rearranged" and "Winterland" remind you that while the guitarist has a wonderful voice – confident and self-assured – she's an equally fine songwriter in the Marianne Faithful mold. "Love Letters From Laos" builds into a buzz saw similar to "Devil I Know," but it's the anthemic second track, "Hey Austin," that's her ticket to ride. By the time she sings the second chorus of "Hey Austin, I love you," her exhortation of "come on, everybody" incites the natural sing-along into the song. Good for Jean Caffeine, because if she weren't considered in the upper echelon of sainted local singer-songwriters before – and she's moving back to town as this is being written – she just took her place. (Jean Caffeine revisits her old stomping grounds Saturday, Sept. 3, for an in-store at Antone's Records, and the next night at Roadhouse Rags, 8pm.) 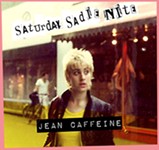