Patti and the 'Quatro' brand 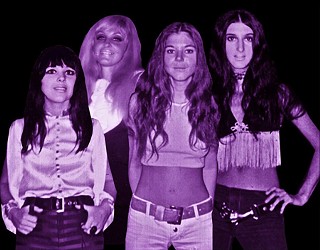 "Detroit in the Sixties was a Renaissance. Motown was the going thing, but [then] the whole town collided with acid rock and that produced the Detroit sound, this raw, seething Motor City music. We all grew up together – Bob Seger, the Stooges, MC5, Ted Nugent, Mitch Ryder & the Detroit Wheels. We were all infused with this rock city energy. It was very different than anything happening.

"You had L.A. and New York, and there was Detroit. Everybody wanted to come to Detroit."

Patti Quatro Ericson radiates a sparkling confidence amid the post-lunch din at Central Market Westgate. Tall and stylishly dressed, with bold streaks of caramel in her well-tended hair and black RayBans carelessly parked atop the tumbling curls, at 63 years old, she resembles nothing so much as a veteran rock star.

Which is exactly what she is.

The "Quatro" in her name isn't just for cadence. It's her brand. Patti Quatro stepped into Detroit music history in 1964 when she turned to her three sisters upon viewing the Beatles on Ed Sullivan and announced, "Let's form a band."

The Pleasure Seekers included Patti, Nancy, Arlene, and Suzi, plus a lengthy list of female musicians impressive for its sheer numbers in the Sixties. Their transformation into hard rock band Cradle paved the way for the Runaways in the Seventies, the Go-Go's in the Eighties, and L7 in the Nineties. The Pleasure Seekers are among the first of the all-girl rock bands to appear after the British Invasion.

Never heard of the Pleasure Seekers? Get in line. After the Fab Four, the ranks of female rockers exploded during the mid-Sixties. If the sight of the Duchess backing Bo Diddley or Janis Martin with a guitar was rare in the 1950s, all-girl rock bands of the Seventies were a throwback to the all-girl swing bands of the 1940s (see "The Miller's Tale," July 6, 2007). Female folk groups and the odd country outfit filled in the gaps for women-always-participated proponents, but the novelty usually played out poorly for those queens of clubs.

The British Invasion created a new playing field and a game that young women wanted to play. Singing was the easiest way in, but young girls who may have glimpsed Sister Rosetta Tharpe playing guitar or heard Wanda Jackson yelp rockabilly refused to believe music was a man's man's man's world. For the Quatro sisters, playing rock & roll during those days "was the wildest ride you could imagine," Patti says.

It didn't hurt that the girls' father was a musician and their parents encouraged music from an early age. Neither was it a hindrance that their brother Michael was a leading promoter in Detroit and thus their entrée into prestigious opening gigs. Nor did it hurt that they were pretty and photogenic.

"We started as teenagers," Patti says. "There were teen clubs like the Hideout everywhere in Michigan. Everybody wanted to have a girl band to bring in the boys to the clubs. We were on the road all the time. The girl bands were such an unusual thing that we got more bookings than Ted [Nugent] and all those Detroit guys. We got out real quick and toured all over."

The Quatro sisters primarily populated the Pleasure Seekers, augmenting their sound with a variety of other young female musicians, including other sister acts, à la the Shangri-Las. Yet the Pleasure Seekers were neither the Shangri-Las with guitars nor merely a blueprint for the Go-Go's. They used their good looks to further good music, but when they hit the glass ceiling, they weren't shattered.

"We were trying to make it through the executives who wanted us to wear lavish costumes, like in Vegas or on The Partridge Family," says the guitarist. "Wow the crowd – tits and ass. We weren't having it.

"That was always the fight with the executives. They just didn't know what to do with women. They were scared you'd fall in love and get married. Any girl musician would tell you that. You walk into a club and they'd say, 'Oh, the singer's dressing rooms are over there.' 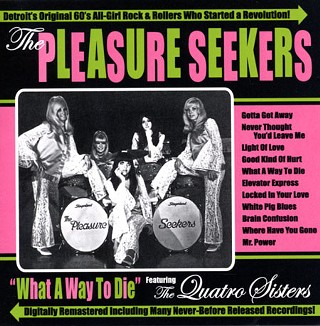 "We heard this all the time, the constant 'Wow, you play good for a girl.' My line became: 'Oh yeah? Well, suck my dick.'

"Jeff was so hot on us, and you know he loved girls. He was always supportive. He jammed with girls all the time. I loved jamming with him. He was one of my mentors. Terrific guy."

What a Way To Die, a swank new Pleasure Seekers compilation, underscores the group's development from bad-girl pop rockers to tough-girl heavy rockers chronologically, 1964-1970, setting the stage for its transformation into Cradle in the early Seventies.

By then, they'd seen the competition, including their peers Fanny, who'd hit the charts with "Charity Ball" in 1971. Like Fanny, Cradle had a feminist edge, one that made "girl" no longer adequate. Mountain's Leslie West famously complimented them by saying, "You play with more balls than most of the guys I know!" This was not opined while Jerry Nolan briefly drummed for Cradle before the New York Dolls.

Frustrated with the status quo, Suzi Quatro exited the band and headed to the UK, where Most promptly took her under his wing. Partnered with three scruffy pre-punks, she dropped her Motown-heavy bass playing over an LP's worth of songs including "48 Crash" and "All Shook Up." Ten years after playing with her sisters in a Detroit garage, Suzi Quatro made the cover of Rolling Stone in 1974, bathed in black leather, the shape of things to come in rock & roll on so many fronts they can scarcely be counted. She was glam, heavy, fearless, rhythmic, edgy, loud, and savvy enough to take a role as Leather Tuscadero on the series Happy Days. She took hits from the mostly male rock critic cognoscenti, but within two years, punk would be in and Suzi Quatro broke the mold.

After Cradle ceased rocking in 1973, Patti Quatro partnered with her brother Michael, then joined and recorded with Fanny, performing on "Butter Boy," which charted in 1975.

"Before we came along, you could be a keyboard player or a vocalist, and that was it. Joan Jett and her group, the Runaways, were hitting right when I was in Fanny. Joan used to follow us around to every hotel and sit in the lobby waiting!

"Even today, kids always ask, 'How did you get that sound?'

"We had to play. We couldn't Auto-Tune our voices or use tapes. No dancers or computer instruments or we'd or be laughed off. The raw edge – the heart and soul – is gone.

"And it's just so stupid, but there's been such a gender bias. Now it's a hot button. Women are all over playing now, and you have teenagers taking lessons and colleges especially for music. They've taken playing to a new level, and women ... the percentages have just tripled.

Suzi Quatro never stopped rocking. She lives in England and DJs on the BBC when she's not playing. Arlene retired early and raised a family, counting among her children actress Sherilyn Fenn. Nancy also moved to Texas and runs a restaurant in Arlington.

Like Suzi, Patti never quit. After Fanny, she married Roy Ericson and turned to another side of rock & roll: tour services for rock and movie stars. In 1993, the couple relocated their Starlight Travel business outside of Austin to Lakeway.

There, they plan and execute travel itineraries, flights, hotels, limos, backstage arrangements, and more, much as Ericson has done for more than 40 years of "getting bands from point A to point B." The two met during Suzi's stint on Happy Days and have been together since. Clients include Diana Ross, Phish, Weezer, and the Marleys.

Patti is also chief instigator behind reissues of the Pleasure Seekers' What a Way To Die and Cradle's The History, missing pieces of the crazy jigsaw puzzle of women in rock. She seldom plays except for reunion gigs, but Patti Quatro Ericson offers sterling and time-honored advice to young female musicians.

"Develop the thickest hide you can. And rock 'til you drop."