The Girls of Summer Redux

Schmillion, out of Girls Rock Camp and into the 18th wave 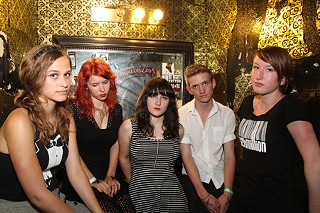 "My eyes are sweating."

"I know, my eyes are sweating too."

It's 101 degrees this June afternoon at Red 7, and we're all a little sweaty-eyed after seeing one Girls Rock Camp Austin band after another demolish ideas about gender, class, and expectation at the first summer showcase.

Kemical Punch's deadpan "Unexpected," the Bagelz's sincere "I Am Awesome," DinoCow's exuberant chant, and the pint-size singer from Technical Difficulties kicking over a mic stand as a symbol of her newfound empowerment: It makes you all lumpy in the throat.

A few days earlier, I'd wandered up and down the halls of Trinity United Methodist Church in Hyde Park, where the first session of Girls Rock Camp was being held, listening to voices and chords and beats from behind closed doors, which were plastered with handmade posters for Bikini Kill, Sheila E., Sister Rosetta Tharpe, and Nina Simone. The circuitous energy was electric.

Local duo Agent Ribbons played the lunchtime set, providing a soundtrack to the twirling and jumping and spinning and taking off of shoes. Girls between the ages of 10 and 18 really love any reason to scream. Below the church's mammoth pipe organ, a banner hangs: "We believe in you." At the back of the space is the "shout-out" table, where girls can compliment one another on something they did that day or week.

Now in its fifth summer (see "The Girls of Summer," June 29, 2007), GRCA isn't only an opportunity for girls learning instruments and songwriting. It's immersion, with classes in publicity, recording, journalism, hip-hop, women's history, gender analysis, and band logos. It's also social experiment: Over the course of a week, these girls form bands, write songs, and perform that which they created, relying on one another as well as the teachers and volunteers.

Emily Marks, the founder of GRCA, is usually in a frenzy during camp sessions, trying to keep innumerable trains on track. A few weeks later, outside of Cheer Up Charlie's, she's more relaxed. The second session's coming up, and when talk turns to Schmillion, a band born of GRCA in 2009, she becomes thoughtful.

"The thing that resonated with me when I saw them play outside the camp for the first time was that Girls Rock Camp is always going to be there. It's going to be in this community, because there are girls that care about it. And those girls come back to volunteer. We're not here to make rock stars, but if girls want to be rock stars like Schmillion, then they have the space and the encouragement.

"There are jokes about us being on, like, the 18th wave [of feminism], but I spend a lot of time with the kids, asking them about what they watch on TV. It's America's Next Top Model and Rock of Love and these reality shows where the entertainment is women being horrible to one another. I feel there's a unique way to teach girls to lift each other up, and I truly believe what they learn in camp, they'll take out into the world.

"I'm really Pollyanna about it."

That balmy June Saturday at Red 7, members of Schmillion stood in the audience both supporting and representing just such a wave.

"Do you want to sleep over tonight?"

Schmillion are standing barefoot around their instruments in the practice room of guitarist Frankie Blue's house. They're going to dye singer Natalie Shea's hair later, and maybe go swimming. Summer's at hand, and the world is theirs.

The local quintet works out the kinks of new songs for a fall full-length, which follows 2010's self-titled EP. Just as practice starts, Blue drops her guitar on her foot and hobbles to the bathroom. Her father, Jack, a former punk musician, follows behind. She returns a couple minutes later with a hunk of white gauze around her big toe.

"You look a little pale," Shea says. "Are you sure you're okay?"

In Ellen Willis' affecting new posthumous collection, Out of the Vinyl Deeps (see "Summer Reading," July 15), the pioneering music scribe writes of listening to music in the 1960s and 1970s through "filters of pop conventions and cliches."

Willis continues: "But feminism made me lust for the voice without the filters, and so I longed for a female rock and roller who would be my mirror. She would make music I loved as much as Blonde on Blonde or the Velvet Underground's third album." 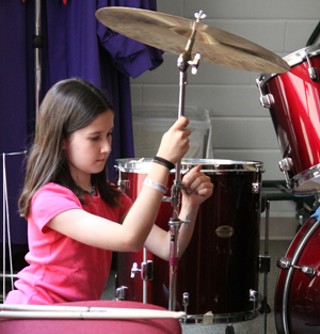 Willis' was certainly a radical thought at the time, but there's something about being a fly on the wall, years and "waves" later, and watching that theory unfold before your eyes. The generational flow in action. The mirror, unbroken.

Each member of Schmillion, formed at GRCA two years ago with a slightly different lineup, has a distinct personality. Blue is the magnetic left brain of the band, intense and confident beyond her 15 years – Johnny Ramone with better bangs. Second guitarist Zoe Graham, 16, is the right brain to Blue's left: soft-spoken and effortlessly funny. Eighteen-year-old Shea is the natural center, her red hair and pale blue eyes amplifying her whopper of a voice. Cecil Blackwood-Cross, 15, is the "bass attitude," as she says, the dry sense of humor and rhythmic anchor.

"I was born this way," she cracks.

And 16-year-old Graham Bailey, well, he's the guy in the band, which gets lots of mileage tonight. Original drummer Sienna Blaw left this year, and multi-instrumentalist Bailey filled in, which the ladies don't have a problem with, even if some of their friends and fans are concerned they're not a "girl band" anymore.

It's a valid point.

GRCA has that way of attracting girls with the same affinities. Shea remembers following Blackwood-Cross and Blue around camp, wanting to do whatever activity they were doing because they seemed cool. A sense of humor is Schmillion's secret weapon, however, summed up by the group's logo: a barcode with their name embedded. The music's punk and rock & roll, timeless and youthful, what Ellen Willis describes in another essay as "a potent means of expressing the active emotions – anger, aggression, lust, the joy of physical exertion – that feed all freedom movements."

Whether they know it or not, Schmillion is part of a freedom movement, whatever wave we're on – a new generation of ladies brought up to believe they can do anything. Not that some songs don't remain the same for teenagers.

"The best part of learning to drive," says Shea, "is cruising at night on the open roads, windows down, music really loud."

They're also a band on the verge, in a way that seems scripted for an MTV reality show. Shea just graduated high school and is going to college at St. Edward's so she can continue playing with the group while they finish the LP."Things keep happening," nods Blue. "Summer was starting and we were writing cool music, but there was no buzz, and I felt like we were losing it. Then we got, like, five gig offers."

In the last year, Schmillion has triple-crushed it: opening for the Bangles at South by Southwest, playing three Texas dates with Arcade Fire, and winning Best U-18 Band at the Austin Music Awards.

The Bagelz proclaim: "I Am Awesome." (Photo by Shelley Hiam)

"We came back from that Arcade Fire show and played a little girl's birthday," Blue says.

"That was the best show," adds Graham. "They screamed like we were the Beatles and asked for our autographs. We signed, like, three casts."

"A lot of our songs, without meaning to, are pro-women," Shea says later, after the band runs through the addictive "Overgrown" and contemplative "Planes" and tests out new material.

"Really?" asks Blue. "I thought they were just about badass people."

"Yeah, but there are a few I'm really proud of," Shea counters. "Like 'Taste,' when I say, 'Whisper in your ear, I know your name and what you're doing here. The thrill you get every night from this game, slandering my gender's name.'"

We talk about riot grrrl and how, even though that movement's ideas are still valid 20 years later, it's time to move on from that as a catch-all for female-dominated rock bands who think and write independently. We talk about Bridesmaids and X-Men. We talk about songs that make us sad ("Heroes") and those that make us lose control ("I Wanna Be Your Dog").

"All of my favorite musicians are male," Blue says. "When I write a song, I'm not thinking Joan Jett. I wanna sound like Iggy Pop."

"We do like Bikini Kill," Cross says. "I mean, we covered ['Rebel Girl'], but I always remember these Kathleen Hanna interviews where the only thing people talked about was that she knew Kurt Cobain."

So what's the next thing?

Blue doesn't miss a beat: "We're the next thing."