Horses and High Heels, and Still So New (Naïve)


Age before beauty. Marianne Faithfull has both, but only at 64 does she get to flaunt it so nonchalantly, a diva grandmother dressed in furs and diamonds sharing her memory book with, say, a 19-year-old local songwriter named Ariel Abshire. There's sweet regret but no apology in Horses and High Heels, and though the lyrics of Faithfull's title track tell a different tale, the image is universally and resolutely one of female youth. In that sense, Ariel Abshire and Marianne Faithfull could have traded titles and not missed a beat. Still So New finds Abshire poised on the edge of her future, chin resting in the palm of her hand, the inquisitive nature of her lyrics reflecting the time-honored cipher of love. "She's on Your Mind" presses a tender bruise of heartbreak and "Every Man" displays bravado so natural as to be adorable, but Abshire isn't aiming for pretty despite her photogenic beauty. Even if Still So New doesn't move her much past her debut, Exclamation Love, it's a strong second step. Faithfull, for her part, rocks in the warmth of a setting sun, dreamily repeating words that mean something to her. Sometimes the lyrics are hers – "Prussian Blue" written with David Courts or the autobiographical "Horses and High Heels" and "Eternity," composed with Lucinda Williams' former sideman Doug Pettibone – and sometimes come from others: Lesley Duncan's lilting "Love Song," Allen Toussaint's "Back in Baby's Arms," an arresting performance of the Shangri-Las' "Past, Present, and Future," and a total homage to Mick and the boys with the arrangement of Jackie Lomax's "No Reason." The voice? Ever colored with whiskey and veiled in smoke. 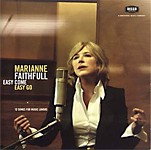 She Was Just 17
Smells like teen spirit part 2: 'Just as good as the boys can'