The importance of being Akina Adderley 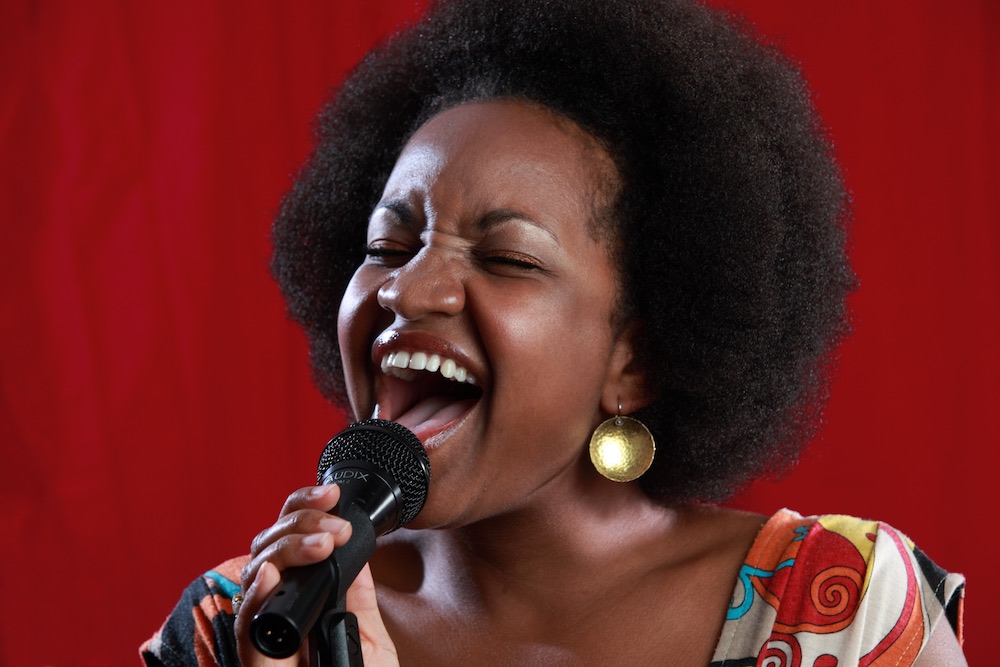 Adderley: Jazz counts it among its essential names, stamped on Miles Davis' Kind of Blue for starters. On this particular night, it's affixed in big, black letters on the Belmont's bright white marquee: Akina Adderley.

Grandfather Nathaniel "Nat" Adderley, a cornetist, began playing with Ray Charles among myriad others, alongside his saxophonist brother Julian "Cannonball" Adderley, who was later recruited by Davis. Akina's father is pianist Nat Adderley Jr.; her mother, singer-actress Janet Adderley. The Adderley train from Florida, where her grandfather was born, makes major stops in New York, New Jersey, Houston, and California before returning to Texas. It's a journey singer Akina Adderley travels with some baggage and much confidence.

Carrying a family name is an untold trial that requires skill, intelligence, ingenuity, and, oh yes, talent. It requires the understanding that a career in music today isn't just about a 45-minute set and a 15-minute break. A life in music today calls not for less art but for more multitasking.

A vocalist must be not only the voice but also the instrument. It's not enough to sing well; there's also writing and playing. In addition, a vocalist usually assumes the role of booking agent, road manager, publicist, and producer, manager, merchandiser, accountant, and – as often in the case with the band – parent and/or referee. That's not counting any day job that has to be worked or personal relationships such as with a spouse, a significant other, or much less children. And it helps to be facile with the press.

Lucky Akina Adderley was born into a legacy that gifted her at birth with these abilities. She and her Vintage Playboys step right into the time-honored role of entertaining a crowd that, while appreciative, thinks of her as little more than background sound. Little do they realize: They're being schooled.

Something About That Brass

In the 1950s, jazz enjoyed a decade of growth, exploration, and popularity unprecedented in decades since. Big band, hot jazz, Dixieland, Western swing, R&B – all had their way with the genre before that, but in the Fifties something else was happening, something marked by new sounds and directions. If the era's synonymous with the Cold War and brittle black-and-white television, that rigid atmosphere made the evolution of jazz possible and that of rock & roll imminent.

The Adderleys brought an exuberance to jazz. Cannonball re-formed his breakout band, the Cannonball Adderley Quintet (featuring Nat Adderley), in 1959 after his stint with Davis. Within the brothers' hard-bop style fermented elements of funk and soul that Cannonball didn't live to see applied to contemporary musical developments such as hip-hop. Akina's grandfather Nat, who died in 2000, witnessed all of it.

Akina, born in 1979, never met her grand-uncle Cannonball, who died in 1975 at age 46, but she kept a very close relationship with her grandfather, who died when she was a junior in college. The Adderley brothers grew up in Florida during a time when convicts labored paving streets. Young Nat listened closely to the cadence of their call-and-response, the seeds of which became his signature tune, "Work Song."

"I saw him several times a year," recalls his granddaughter. "My sister and I went on tour with him to Europe when I was 10. I still have a lot of fondness for trumpet players and cornet players. I often wonder if my playing music where horns are such an integral part is because I listened to soul stuff when I was a kid or because my grandfather played trumpet.

"There's something about that brass. It's its own voice, and it supports and complements the human voice."

Akina wasn't the first Adderley to catch the blazing family torch; she's just the most active of her generation. "Because apparently I only go to schools where my parents went," she jokes, noting that she attended what's now New York's LaGuardia High School for Music & Art and Performing Arts and, later, Yale University. Always a strong vocalist, she studied opera and classical music.

Her father, Nat Adderley Jr., once held the Adderley standard too, fulfilling his musical promise early with piano and composition. At 11, he wrote "I'm on My Way," recorded in 1967 when he was 13 by his father and uncle. Nat Jr. had the good fortune to attend LaGuardia High School, where he met Luther Vandross. The two formed a friendship that resulted in Nat Jr. leading the soul singer's band for 25 years. Vandross died in 2005.

"They were in a [school] group together called Listen My Brother, and they performed a couple times on early Sesame Street," marvels Akina. "Luther was an amazing man, a sweetheart, an incredible performer, and an avid lover of Ms. Pac-Man! He used to bring a big video-game console on tour.

"Luther dragged me up onstage one time during a song called 'Searching,' where they brought on a few cafe tables and had the backup singers sit at the tables, legs crossed, two-hand snapping. I was in the pit with the musicians, and he had one of the backup singers run down, grab me, and drag me up.

"What could I do? Had to sing me some 'Searchin'! Searchin'!' and snap to that beat!"

As her Vintage Playboys filter onstage, Akina Adderley cuts a lithe figure in a summery yellow dress, setting up her microphone and dashing to a nearby table to finish her dinner between setup chores. Her husband, Todd Jenkins, sets up his percussion instruments beside drummer Ed Miles as Eric Lange and Jace Ryann tune guitars and Kyle Clayton plugs in a bass. Keyboardist Nick Litterski is absent tonight, as are the Smokestack Horns or the Hellfire Horns. Tonight a sole trumpet suffices.

As with many Sixth Street area bars and restaurants, playing the Belmont appears to be an easy gig: serenade a post-work and nightclub crowd with rock, pop, and jazz standards. Nothing too obscure or buzzkill will be played, unlike her gigs at Antone's or Momo's, for example, where a different audience is listening with an ear for originality.

"At the Belmont, the audience might not necessarily be coming to see me, so I try to balance the set. It's more original material, actually, but I do like to include a good number of covers. We play Steely Dan's 'Do It Again,' and I use it as sort of a bait-and-hook, hoping that whatever they enjoy about the cover, that they find some glimmer of that in my originals too, because everything we do has been inspired by or been connected to the past."

During the first set, Adderley is funk to funky, with the Vintage Playboys slathering hot-buttered soul all over her arrangements of Bill Withers' "Use Me" and "Ain't No Sunshine," plus a true-to-the-original interpretation of the late Buddy Miles' "Them Changes." The well-dressed audience responds to the breadth of her eclectic musical tastes, with Jeff Buckley's "Everybody Here Wants You" and Nina Simone's "Tell Me More and More and Then Some" proving atypical cocktail listening, and yet in the frontwoman's capable hands, the set's seamless.

That deft touch should dominate her upcoming CD, tentatively titled Say Yes. Adderley rhapsodizes about its guests, including guitarist Danny Anderson, Ephraim Owens on cornet, and "Big Sam" Williams and "Da Phessah" Drew Baham of Big Sam's Funky Nation. She's been trying some of her songs on audiences, with "Get Outta My Way" emerging as a favorite, along with "Attitude" and "Easy on Me." Along the way, she gets to use her smoky, supple, and, yes, soulful voice.

"They joked I was singing before I was talking," she smiles. "I sang in choir, musical theatre. When I was in junior high school, I just started singing backup for different bands. I was never not singing. I used to sing classical music. In high school and in the first half of college, I was training to be an opera singer.

"It took my folks a while to get behind me doing a more contemporary thing because I put so much study into classical, but they have been so incredibly supportive. I still love opera, and every now and again I will go to the opera, but if you're called by something else, what are you going to do? When I started writing, it was feeding me in a way that singing arias just wasn't.

"Being able to write my own material and perform it, and for that to be accessible to other people – there's something very powerful in that."

On her business card – the one that employs a 1970s-style cartoon of her with a vinyl record in place of her trademark Afro – Akina Adderley lists her occupation as vocalist, songwriter, and educator.

This too runs through the Adderley family, beginning with her mother, who runs "the family business," the Adderley School for the Performing Arts in Santa Barbara, Calif. Her father and grandfather believed in education, and Cannonball even narrated A Child's Introduction to Jazz in 1961. Akina teaches music and drama at ACE Academy. She also teaches at the Lone Star School of Music and Girls Rock Camp in the summers and conducts private lessons. One's never too old or experienced for lessons.

"I have a really good ear, and I'm trained and educated, but I wish I had better piano chops," admits the singer. "I can play, but nowhere near as good as my keyboard player or my dad, for that matter. If I were a better piano player, I'd be able to communicate certain ideas more quickly.

"In retrospect, it was really powerful to see my dad at the helm of this great adventure, calling the shots and being sensitive to everybody's musical contributions. Trying to see the best that every individual musician has to offer and really try to utilize that in the sound, especially in regard to his band leadership and his arrangements. Without even being conscious of it, I took that. I like being a band leader and sharing a vision. Not just being a leader, but a leader who embraces everything that everybody else brings to the entity.

"Part of what I enjoy about band-leading is seeing how people respond and find the value in what I am trying to communicate. When I'm teaching, I imbue performing and writing in there as well because that's where I'm coming from. A lot of people have an artistic/performance job and then their day job, and never the two shall meet. I feel very fortunate that I don't feel like I have the day job where I slave away and I'm unhappy. ...

"It makes me feel like I'm trying to do something on this Earth."

Check out Akina Adderley at the Chronicle's next Paper Cuts installment, Tuesday, June 21, at the Palm Door. It's free, but space is limited. Go to austinchronicle.com/papercuts to RSVP. 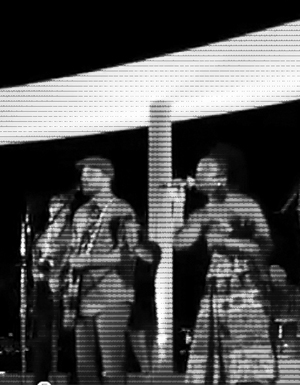