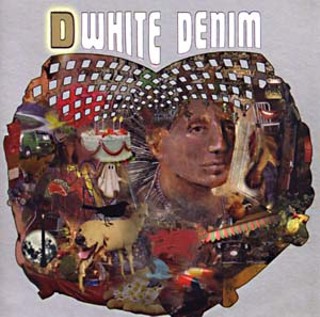 
White Denim's never lacked direction. The longtime local power quartet just has too many tangents meriting exploration. From the early carousal skronk and garage-soul fervor of debut 7-inch Let's Talk About It to the spastic trucker jams on 2008's Exposion and maximum R&B of 2009's Fits, White Denim has reinvented itself with each passing release. The band's fourth full-length, D, largely forgoes the breezy indie pop of last year's digital-only release, Last Day of Summer, attempting instead to usher jazz-fusion into the indie era. That's an improbable feat, but the rhythm section of bassist Steve Terebecki and drummer Josh Block lock in tighter than DNA strands, while guitarist James Petralli's progression can be measured in the group's instrumental catalog. Latest installment "At the Farm" sounds like a high-speed chase from Group Doueh's Western Sahara to Mississippi's Parchman penitentiary. In the Rubik's Cube of D, Petralli's Beat poetry struggles at times to find its place, as in peyote parable "Burnished" and the tropical "River To Consider," which sets fluttering flute to a Caribbean locomotion. It's most apparent in the bedroom warfare of "Street Joy," a slowed-down ballad that spotlights Petralli's stunning, crystalline voice in a cloud of reverb. "Anvil Everything" and "Is and Is and Is" introduce second guitarist Austin Jenkins, the former with rolling arpeggios and the latter on a searing Southern rock chorus. Only "Bess St." conjures the oddball charm and chug of the band's earliest Spartan trailer recordings, but the blissful psychedelia of "Drug" charts another single for the inevitable greatest-hits compilation. D ends, in characteristic fashion, with a curveball, the woozy Western swing of "Keys," a fitting reminder of White Denim's many pages left unturned.