Darling New Neighbors are calling it quits after one last splash, Freakers on the Spazmonaut Train. The five-tracker's the most "rock" the local country-folk trio has sounded, especially on New Wave standout "Hate," and holds off on the usual accordion jam until closer "Hometown 1988," a fitting send-off for a band of freaks and geeks. It's gonna be a pop summer in Austin as heard on Elevated Lines, Sixteen Deluxe singer/guitarist Carrie Clark's new project. Evil Eye EP is assisted by Redd Kross' Jeffrey McDonald ("Evil Eye"), Matt Devine ("This Mistake"), and fellow Deluxe-r Steven T. Hall ("Black Hearted Faction"). Clark works the songs her way, though, all elevated on her pink cloud of a voice. Quintet Sad Accordions' latest offering, six-song The Colors and the Kill, is its first since 2006's A Bad Year for the Sharons, and that gap has worked to the group's advantage, as religious themes and varying tempos swirl around standouts "You Can't Hide From It" and "Fallen Czars." Waldo Wittenmyer's half-dozen tracks on a self-titled CD rock & rolls a 1960s variety, but the young Austin singer-songwriter's debut ambitiously updates for 2011. He sounds genuinely heartbroken on "Tender Is the Night" and "Get Over It," but knows the ingredients for a good pop song. Trio the Magnificent Snails' Baby Acid Trips doesn't sound quite as mind-altering as it could, trying out Afro-pop ("Mean Girls") and low-key ballads ("Dozen Rozez"). 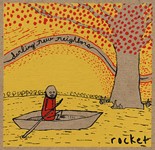