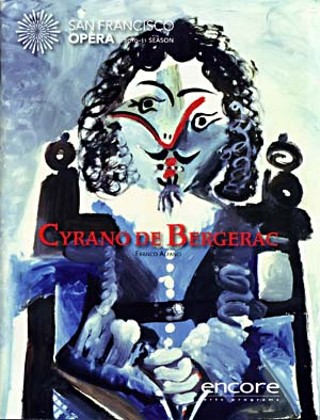 Fun Fun Fun Fest 2010 was a week away, the final music festival of Austin's yearly marathon, but Saturday night, Oct. 30, settled springlike in San Francisco. On the eve of the city's annual Halloween rites in the Castro, calm blanketed downtown. City Hall, across the street from the San Francisco War Memorial Opera House, lit its dome orange.

Mother and I wore suits, hers crimson velvet Versace as vintage as our destination. Street parking proved plentiful in the eye of the following day's storm. Very little in this cradle of culture and government suggested that one of music's greatest figures would be onstage within the hour.

Tickets never had been publicly available for this long-sold-out house (3,146). Rather, Cyrano de Bergerac could be attended by the general public, as opposed to subscribers, only by buying a package of three operas, two tickets each. Single admissions for other 2010-11 titles (The Marriage of Figaro, Madama Butterfly) went on sale in July, but not Cyrano, centerpiece of the season. Seven performances over two consecutive weeks divided by one parent's birthday and FFFF weekend. Mathlete down.

August, Craigslist – finally: two tickets, Oct. 30, balcony rear. Which an online seating chart revealed as almost the last of the chair wares there, "$125 per, obo." Happy birthday mamá, your favorite singer serenades my native city, only we're sitting in Oakland.

Sept. 29, another listing – finally – this one for a standard trio grouping at slightly reduced prices and with ace placement. My email goes out at midnight, and the reply comes back exactly five minutes later – four minutes after my laptop's unfortunate curfew that night:

"That is correct – all three operas together and not just Cyrano. Actually, I might have sold Aida so it could just be Cyrano and Figaro left. I don't have much time to sell stuff which is why I want to just sell all together."

Ten hours elapse before my response, but Pacific Standard Time is on my side. David Mamet's ABCs define such moments: Always Be Closing.

A month later, almost to the day, I'm standing in the front row looking down at my mother's hands on her program. There are only two words for this singular moment: Plácido Domingo.

Living for the City

Over a late supper one holiday season, kindred spirits Charlie and Cassie inform me of their Houston rendezvous the next day to see Stevie Wonder.

A Time To Love (2005), still Wonder's most recent studio sublimation, revisited at least one past life – opening for the Rolling Stones. What began on their 1972 North American tour cycled back around to Super Bowl XL in Detroit, with the Saginaw-born seer relegated to pregame entertainment while the early Motown adopters' half-time antics dominated center stage. Four months later, May 2006, Lula Mae Hardaway died, tarrying in a dream to chastise her son.

As with A Time To Love, a decade had passed since previous outings. His Holiness the Dalai Lama at the Frank Erwin Center two years earlier – appetizer for Ravi Shankar hours later at the Paramount Theatre – wasn't half as sanctified as Stevie Wonder live. The Austin City Limits Music Festival in September isn't alone in ranking Sir Songs in the Key of Life its top priority. Bucket lists exist precisely because humankind produced a soul pseudonymed Stevie Wonder.

Before the mighty Man in Black towered atop Emo's main stage at SXSW 1994, our Central Texas wellspring hosted page after page of 20th century music history, from Duke Ellington reminiscing in tempo at a Downtown hotel (remember "Stompy Jones," April 30, 1999) to Muddy Waters' black Buddha blues at Antone's (pray for "The Last of the Delta Bluesmen," April 22) – with Hank Williams and Elvis Presley in between at the Skyline Club on North Lamar in the 1950s. Johnny Cash, however, breached a new frontier somehow, no talent too huge for unlikely local stages, everything from Luciano Pavarotti at the Erwin Center to Prince at the Belmont.

Cue the Capital One commercial: Who's on your bucket list?

'The Barber of Seville'

Half Price Books on North Lamar, sharing the block with Goodwill: Trawl its depths.

Laser discs, 12-inch DVD prototypes, stacked up two-dozen thick under a vinyl aisle where 8-tracks might have once languished. Records to the unassuming, their movies went Blu-ray, but the majority of their music programming hasn't. At such a crossroads sat four operas directed by Franco Zeffirelli, whose 1968 film adaptation of Romeo & Juliet titillated the first generation of cable responders. Olivia Hussey, wherefore art thou?

Othello, La Traviata, and Seinfeld favorite Pagliacci required barely an iota of operatic acquaintance to ring them bells, and Plácido Domingo on all the LP-sized covers none at all. New millennial car-passing from Granny meant a tape player only in Mother's Pontiac, and she had the dozen Plácido Domingo cassettes to prove it. Spanish pop, Broadway standards, "Blue Moon," you name it – save for the actual genre with which his name's synonymous. No Three Tenors either. There's no better discovery for either of us than a 99-cent remaindered tape of her go-to Spaniard, Madrid-born and Mexico-grown, so at $2.98 a pop for Philips media originally retailing between $60 and $120, this Half Price trove including a live concert from Seville went home to my working laser disc player.

Plácido Domingo, Grandisimo, an hourlong christening of the 1992 Spanish Expo in Seville Stadium, translates as Plácido Grandisismo onscreen. To see its star simply greet Spaniards as far as the eye can see explains either moniker. Opening on the overture to Carmen, which takes place in Seville, the National Symphonic Orchestra of Spain could be the Merrie Melodies players of Bugs Bunny and Yosemite Sam's Looney Tunes, so ubiquitous is the theme.

Black tux, white fitted shirt, and red handkerchief appearing quilted to him since birth, Domingo looks the suitor, a fresh-faced youth with the best intentions. Turning 70 in January, Domingo at 50 grins positively boyishly. In song, voice rising in volume, his mouth never yawns open, a tight elasticity around his lips demonstrating instead how not to open wide, despite French rising from deep inside him like a geyser. Fists clutched to his diaphragm, Domingo pushes the duet to eruption.

Violence clouds his sincerity, left eyebrow rising in ire as he scowls in the face of Migen­es' ferocious denials, her waving him off so vehemently she loses a chandelier earring. Following an operatic rendering of Gershwin's "Summertime" from Porgy and Bess, the two conclude by trading soaring vocal solos on Puccini. Opera, not opposable thumbs, separates us from the beasts. 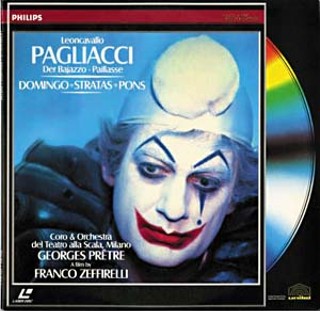 This time orchestra and tenor lay into "Grito," cry of the Americas, with a Latin lover's gait, Domingo all but transforming it into a national anthem. Sparklers alight. On the final "América," Plácido grandissimo opens his jaws wide enough, long enough, and loud enough to suggest that he discovered the New World instead of Christopher Columbus (www.youtube.com/watch?v=wfqa27jMIgc).

Given hazy memories of maybe H.M.S. Pinafore as childhood domestication, my opera for dummies begins with Tommy and stops at The Wall, but when Plácido Domingo walked out in full musketeer garb, he transcended any theatrics and all epic sets. The minute Stevie Wonder came onstage in Houston, the same: the innate understanding that this person isn't like everybody else. Martin Luther King Jr. went through my mind in the Bayou City, and similarly at the Opera House, statesmen puffed at my chest, Roosevelts, Kennedys, Rockefellers.

Unamplified, his singing sounded everything at once – stentorian, plaintive, dulcet – a sound so naturally awesome it's cataloged in modernity's consciousness as representative of a single word, an entire genre. Marley, Willie Nelson – who else can claim such branding?

At one scene break, a couple of cast members ran down to the foot of the stage – stage left, where we sat disbelieving – with a small desk. Indeed, soon thereafter strutted Cyrano/Plácido, his facial prosthesis practically a drumstick from the orchestra below us. As he sat not more than 10 feet away, my musical close encounters began flashing before my eyes: one-on-one with Springsteen, theological musings from Ornette Coleman, twin Spanish lessons with Chucho Valdés at Barton Creek Mall and on the line from Cuba by Ibrahim Ferrer. Cyrano de Bergerac ran nearly three hours, but in my imagination it never ceases, clocking endless fascination.

Okkervil River streaming live on NPR from the Cactus Cafe last month loomed out over the venue's short front row like the Cure at Coachella. Rich, dramatic, overly ripe, Will Sheff and Robert Smith share an epiglottal burble deep enough to swim in. Wednesday press deadline at the local weekly barely missed the Music Department during the dinner hour.

Akira Kurosawa's samurai cutup Yojimbo – screened by the Austin Film Society in a dazzling Criterion Collection HD projection for the Violet Crown's soft opening – wasn't the main event either. Midnight had come and gone hours later down at Beerland, but my bloodlust remained undimmed.

Mary J. Blige had crept into my post-bucket list existence. Whereas the 10-year-old in Alejandro Escovedo's "Sad & Dreamy (The Big 1-0)" hits a milestone that hides the brick wall – "I hit the big 1-0/feel so old/candy just doesn't taste as good anymore" – mine ratcheted exactly the opposite reaction following Plácido Domingo. Music now tasted preternaturally life-giving.

Burning desire this early morning had built up since SXSW from a redhead in full cranial windmill on our cover. Locals inspiring Matador Records to go national with an Austin punk sampler, Dikes of Holland practice the Red River seizure a lot more frequently than the Rolling Stones roll into Zilker Park, but the Ramones chanted it best: gimme gimme shock treatment.

Careening through a dank splatter of bat-cave vox and Dark Knight guitars, the second vinyl band on the A-side of the Dikes' debut LP last year, "Into the Ditches," touched down a garage-rock twister in the middle of a 35-minute riot. Convulsions occurred involuntarily and frothing encored. Catharsis, thy name is Dikes of Holland.

Hank Williams wasn't lying. My bucket's got a hole in it.