Foot Patrol comes to its feet 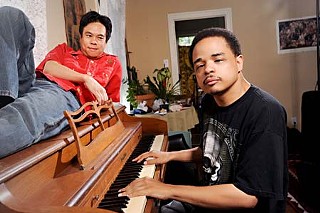 "So, are your shoes closed- or open-toed?"

It started with an innocent question, but I knew where it was going. Several minutes later, I had my feet in his lap.

"I can tell you're on your feet a lot. You're a tough girl."

It's a balmy Saturday afternoon, and he's running his fingers up and down my toes. He wiggles each one slightly to the right. They look like tiny palm trees bending in the breeze.

"These are nice. Do you wear socks with your shoes?"

"Mm-hmm. I can tell," he says, rubbing a callous near my right pinky toe. "You walk hard."

"I do. All the women in my family walk hard. I think it's a German thing."

On to massaging the arches, soles, and tops of my feet. A little tickling here and there. He likes to hear the laughter that accompanies it.

He shoves my toes into his nose, inhaling the scent like pure oxygen.

"Let me get the lotion."

Smell, sound, and touch are especially important to TJ Wade, who's been blind nearly since birth. The keyboardist and singer of Foot Patrol, Austin's only R&B/funk band devoted entirely to matters of the sole, puts his senses to singular use.

Sitting on the couch of Foot Patrol co-founder/bassist/producer Hung Nguyen, his head bobs up and down to the hip-hop playing in the background, and in between scratches and sniffs of my feet, he freestyle raps over it. There's something visceral about Wade's singular obsession and how it inspires him. Good beats and a pair of stinky feet are his best muse.

A DIY funk band fronted by a blind guy with a foot fetish is an interesting hook, but Austin has its share of novel acts. Foot Patrol could've been relegated to that tier, but in the last year, the group's managed to transcend the joke and become something more concrete.

In fact, it's the decade-plus friendship between Nguyen, a Vietnamese immigrant, and Wade, a sight-impaired African-American, that makes an idea as ridiculous as Foot Patrol endearing. They met when Nguyen was an instructor at the Texas School for the Blind & Visually Impaired and Wade was a 14-year-old student there, bonding over their love of Prince. Nguyen quickly recognized Wade's talents and encouraged him to perform. Soon enough, they were recording together on a 4-track recorder, absorbing Ice Cube, Scarface, and Geto Boys, which resulted in their hardcore rap duo, Terroristic.

"Coming up, Ice-T was my number one influence," Wade says. "He taught me you can say what you want – it doesn't matter what people think. Especially being blind, sometimes people don't always understand you. Ice-T taught me to vent."

In 2000, Wade graduated from TSBVI and left Texas to try and make it in mainstream music, landing with the label Grassroots Entertainment.

"That, of course, was harder than I thought," he admits. "I worked with D'Wayne Wiggins from Tony! Toni! Toné! and [producer] Krucial. But it was compromise, and I knew that with the music I liked I wasn't going to compromise.

"They like: 'Welcome to the game, man. You gonna lift weights.' 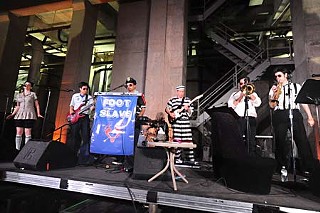 Wade and Nguyen reunited in 2005 when the singer's mother saw he needed an outlet and got back in touch with his former teacher. Foot Patrol was born.

"When Ghostland Observatory broke out from that one [Austin City Limits Music Festival] performance, that's when I was like, 'Well, that's just two guys with a drum machine and keyboards,'" Nguyen says. "And TJ can sing better than that. 'Why don't we do that?' We wanted to update funk as a genre."

One of the pair's first songs, "Freeze," from 2006 debut Toetry in Motion, is one of Foot Patrol's most popular, the chorus of which ("Freeze/You're under arrest/Put your feet behind your head") is unlike any other you'll hear shouted by a crowd of drunk college boys and Downtown ladies. Same goes for "Such a Pity," from the following year's Smellabration, which insists, "It's such a pity that your toes are oh so pretty but you won't put out." Wade and Nguyen's collective ear for beats and choruses has turned fetish into something accessible.

"It's gimmicky, like Gallagher or Weird Al," Nguyen acknowledges. "That's part of what we're going for. Some levity. It's subversion done subtly.

"I also wanted TJ to have an audience."

They certainly do now. Foot Patrol's crowd has grown exponentially since their first gig at Chain Drive five years ago. Last summer's Michael Jackson tribute night – complete with a moonwalk contest – packed Scoot Inn's outdoor patio with fans honoring a man whose music was sometimes considered taboo too. After the performance, Wade entertained a long line of women waiting to have their feet worshipped.

The 28-year-old Wade is upbeat, often moving his head and arms to some beat heard or unheard. He's aware of his talent.

He strictly likes women's feet, but doesn't mind having his rubbed, or more specifically, tickled.

"I realized I was into feet when I was about 10 years old," Wade says. "I would ask different girls my age what shoes they were wearing, if they wanted their feet rubbed. One person just happened to hand me their foot. And it's been on ever since."

"That was just a thing TJ had," Nguyen continues. "We didn't want to exploit it. It's a personal inclination, and we all have our things. But at that point in his life, I knew TJ was bitter about mainstream music. So I said: 'We're gonna write funky songs about feet. It's gonna be fun, and you're gonna get some.'"

An extreme concept, but it melded the duo's different influences in a unique way, "using a hip-hop medium and non-hip-hop source material, stuff like the Residents," explains Nguyen. "Plus, the puns never stop. People are always telling me new ones. Most of the titles on our new album are ones friends told us. They're like, 'How about ... raw footage?'

Pussyfooting, the group's fourth full-length, has come a long way since Toetry in Motion. Mixed by Grupo Fantasma everyman Adrian Quesada, it's heavier on beats, fuller on arrangements, and takes obsession to its logical conclusion. It's there on the cover, full circle: Officers Nguyen and Wade, neon-lit like extras from Hill Street Blues, with a pair of feet in cuffs. It's the "essential" collection, and probably their last foot-centric one. They're "about to evolve," get away from the Prince vibe and get more "twisted," Wade promises.

Since adding a horn section – the Shoe Horns, natch – backup vocalists, theremin players, and gender-blurring dancers, Foot Patrol has become its own sort of Rocky Horror Picture Show, a slightly risqué celebration of kink and identity.

"A lot of people think feet are disgusting," Wade says. "People [with that fetish] often feel ashamed. I'm saying, this is something I like. I'm not afraid to say I like feet. I don't think I should ever be ashamed about feet. I took a reflexology class, a massage class, and I got kicked out for liking feet too much. They didn't see it as PG."

Foot in the Door

Do a quick Web search for "foot worship," and you'll definitely dip into the "pop-up" depths of the Internet: trampling, binding, boot worship, the more humiliating side of it. Conversely, Foot Patrol celebrates feet with humor, pointing out it's a common fetish. Andy Warhol allegedly had a foot fetish. So did Elvis and Dostoevsky.

Wade currently lives in Killeen with his parents, who are helping him learn to live as an independent adult. Nguyen hopes to move him to Austin so he can have more of a social outlet.

"I realized just last night that I've known TJ half his life," he says. "We've been friends long enough that I could write what's on TJ's brain. People are surprised when they see I've written lyrics for a song, but it's what TJ would've written too."

Nguyen shows me a bag of early minidisc recordings, with titles like "I Worship Satan."

"That was our connection. We both felt like outsiders. Growing up, there were psychological barriers, both with me and my culture, coming to America, and TJ being blind in a sighted world. I see that in him. We're kindred spirits in that sense."