Spanks for the Memories

Merry and incomparable musical vaudeville troupe Asylum Street Spankers forged a legacy stretching from a residency at the Austin Outhouse in late 1994 to off-Broadway. This week, the self-proclaimed God's Favorite Band hangs up its collective paddle with a three-night Farewell Tour of Austin, an event that's being filmed for a future DVD release. While washboard poet Wammo won't be in attendance – he's on tour with Hamell on Trial and in a legal dispute with Spankers manager John Riedie over Spanks-a-Lot Records – most of the other usual suspects will be accounted for. Tonight (Thursday, April 21), the Cactus Cafe hosts "Givin' the People What They Want," a 20-song set selected by the fans. Ruta Maya boasts a "Night of 1,000 Egos" on Friday, featuring a special cast of characters – Guy Forsyth, Stanley Smith, Pops Bayless, the Mysterious John, Olivier Giraud, Colonel Josh, Sick, and Jimmie Dean, among others – before the final blowout at United States Arts Authority on Saturday, "Spanks for Everything." To help lend some perspective, OTR assembled this timeline of Spanker Madness with help from Riedie and Forsyth.

"When the Spankers started, clustered around a cassette player spinning mixtapes at Pops' apartment on Congress, we knew we loved the music, but we had no idea how to play it," recounts Forsyth. "So we grabbed whatever we could get our hands on and hit it as hard as we could." For his epic remembrance of ASS, see "The Last Laugh" on the Chronicle Music blog.

April 4, 1994: The first unamplified gig at Cafe Brasil on Barton Springs Road. Bill Thompson (the Original Snakeboy) coins the "Ladies spanked, free" line. "Two girls in the audience (of about 10 people) stood up, turned around, and dropped their pants," says Forsyth.

March 1996: Spankers win Best None of the Above and Best Tape for their Live cassette at the Austin Music Awards.

November 1996: Debut LP, Spanks for the Memories, produced by Danny Barnes, is released.

Fall 1997: Forsyth exits the band. "Christina [Marrs] was coming into her own and needed the space."

May 1999: Band disintegrates after inaugural European tour; only Marrs and Wammo remain

May 27, 2000: At Antone's, Forsyth officiates the wedding of Marrs and manager John Riedie.

June 2001: Appear at the Roskilde Festival with Bob Dylan and Patti Smith

November 2002: After an appearance on The Bob & Tom Show, "The Scrotum Song" becomes the radio program's most requested song every day for the next year.

April 2004: Due to popular demand, the Spankers succumb to "demon electricity."

January 2008: "What? And Give Up Show Biz?" lands off-Broadway at the Barrow Street Theatre

Record Store Day has become the music industry's Black Friday, with long lines and exclusive releases being flipped on eBay faster than the Blind Pig Pub boarding up for Texas Relays weekend. OTR took shelter Saturday morning at hip-hop megastore MusicMania, scoring the Black Angels' rarities EP, Phosgene Nightmare, the Sonic Boom-remastered 13th Floor Elevators 7-inch – the packaging tells of an upcoming release, Music of the Spheres: The 13th Floor Elevators Vinyl Box – and Derek & the Dominos' double A-side single "Got To Get Better in a Little While" b/w "Layla," culled from the 40th anniversary reissue of Layla and Other Assorted Love Songs. "That was the last song the Dominos ever played together," cackles local Domino Bobby Whitlock in regards to "Got to Get Better," which was only halfway finished when a dispute between drummer Jim Gordon and Eric Clapton ended the band with a shouting match. Whitlock finally got to cut his part six months ago at Willie Nelson's Pedernales Studios, laying down vocals for a third verse and some piano and organ overdubs. "For that brief moment in time, Derek & the Dominos were kicking," says Whitlock, who holds down Saxon Pub with wife CoCo Carmel every Sunday at 6pm. Following up similar reissue campaigns for Clapton's 1970 solo debut, Delaney & Bonnie's On Tour With Eric Clapton, and George Harrison's All Things Must Pass, Whitlock's new autobiography, now in its fifth pressing, should be landing in local retailers and on Kindle shortly. "I went into BookPeople the other day and got recognized as a writer," says Whitlock, "not a rock star." Like interstate mile markers, Butch Hancock's black-and-white photography accompanies If I Was a Highway, the latest collection of essays by Chronicle columnist Michael Ventura (see "The Road Is Long"), but this isn't the first time the two flatlanders have worked together. "We've been involved in some bizarre projects, like him learning how to handle wheelbarrows full of cement up and down little hills in West Texas," chuckles Hancock from his home in Terlingua. "He's always coming up with a new slant on everything. As a writer, he's rather fearless. He delivers the punches." Hancock sits in with Ventura for a signing and acoustic performance at BookPeople on Friday at 7pm. Says Hancock, "He needs a good heckler up there."

Local C&W outlaw Freddy Powers (see "The Good Times Ain't Over," Aug. 22, 2008) is being honored by the Wittliff Collections and the Center for Texas Music History at Texas State University on Wednesday, April 27, 5pm. RSVP to southwesternwriters@txstate.edu.

Former Austin studio owner and Steamboat sound engineer, Dennis Davis was found guilty of first degree murder in the 1985 beating death of Natalie Antonetti on Friday afternoon (discussed at length here last week). At the sentencing on Monday, her son, Austin rocker Johnny Goudie, stressed the magnitude of that loss: "It was devastating ... horrible. There's no other way to describe it." Davis was sentenced to 36 years with parole eligibility after 12 years. 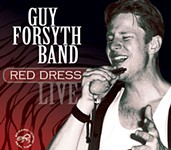