Last of the Delta Bluesmen 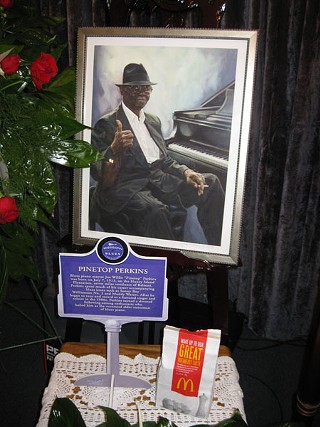 Flanking Pinetop's casket, a portrait by Diane Russell, his marker from the Blues Highway, and his ever-present McDonald's bag (Photo courtesy of Christopher Gray)

A peculiar darkness penetrates nights in the not-so-Deep South – heavy, humid, dense at 3am. By day, approached on the interstate north from Louisiana, Mississippi blankets itself in spring wildflowers, white-blossomed dogwood, and thick patches of fragrant clover. The night is black as pitch.

About an hour west lies Highway 61, partnered with the mighty Mississippi River from the mouth of the Delta up through the famed crossroads of Highway 49, into Memphis, Tenn.; St. Louis; and north to Minnesota. The blues highway, as it's rightfully known, was traveled by the most famous of the blues musicians, beginning with Charley Patton and Son House and on to Robert Johnson and Sonny Boy Williamson, and of course Muddy Waters and Jimmy Reed.

When morning finally arrives, it does so with the audacious colors of azaleas clustered among wide expanses of cotton and other fields. The turn from the interstate west is otherwise uneventful, dusty trucks and the occasional horseback farmer passed on the roadway where a sign for the Tallahatchie River floods up long-buried childhood memories.

There's nothing to suggest that in a few hours, at a small funeral home in Clarksdale, Miss., just a mile or so from Highway 61, one of the last Delta bluesmen is being laid to rest.

Born Joe Willie Perkins in Belzoni, Miss., 1913, "Pinetop" Perkins preserved a musical birthright. Honeyboy Edwards may now hold the distinction as the oldest Delta bluesman, but make no mistake, that cachet is shared exclusively by Louisiana and Mississippi and leaves the equally talented musicians born in Alabama, Georgia, Texas, and even Arkansas classified as merely Southern blues. Being raised east of Old Man River seems to include a little something extra at birth, a calling card worthy of presenting to the Devil himself: "Born in the Delta."

One night in 1976, at Antone's original Sixth Street location, Pinetop leaned on the end of the long bar nearest the front door. Nearby, Clifford Antone's mother stuffed grape leaves for dolmas, which were sold at a small sandwich counter in the club's earliest days. A sports cap perched atop his head, Pinetop wore a Hawaiian shirt and grinned at all the women entering the venue.

"I'm Muddy's chauffeur," he'd tell anyone who listened, a twinkle in his nut-brown eyes.

Later that night, when he strutted onstage with Muddy Waters and sat at the piano, that same woman stared and laughed back. Thus began Pinetop's long and ultimate relationship with Austin. Pinetop most likely played here well before the 1970s, in the chitlin circuit bars of East Austin. By the time he arrived at Antone's, he was in his 60s and hardly slowing down.

Muddy Waters died in 1983, and Pinetop returned occasionally. As he had done with other bluesmen, Clifford Antone invited Pinetop to live in Austin, and by 2004, he moved here. First, he lived with Clifford then took a series of small apartments, including one on Riverside Drive near me. Having Pinetop Perkins as a neighbor was the experience of a lifetime. I'd stop in to see him and often Clifford was there. Usually that ended up with Pinetop at the piano, playing a little something as I was on my way out the door. Not on Sundays, however.

The convenience of proximity also resulted in phone calls such as this: "This Pinetop. Would you go to McDonald's and get me a Big Mac and apple pie?"

For Christmas that year, I gave him a McDonald's gift card.

Meat on They Bones 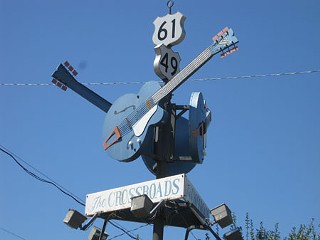 Ground zero: The crossroads of Highways 61 and 49 in Clarksdale, Miss. (Photo courtesy of Christopher Gray)

Interviewing Pinetop was a challenge.

"I'm deef," he said, rhyming it with "beef" and tugging on his earlobe as we prepared to talk for the Antone's Home of the Blues documentary in 2004.

We met in the lobby of Clifford's condo, where a gleaming grand piano sat. Pinetop teased the keys and conducted the interview himself by offering unsolicited answers that managed to be close to the unheard questions. Done, he shuffled over to a group of senior citizens observing nearby (see "When I'm 64," Feb. 4, 2005). Tipping his hat to a gray-haired, 70ish gentleman in a wheelchair, Pinetop grinned.

Two years later, Clifford Antone died suddenly. During the funeral, Pinetop performed a tune, then looked over his shoulder at the shell-shocked mourners. With his index finger, he picked out seven well-worn notes that broke the congregation into relieved laughter: "Shave and a haircut, two bits."

My mom met Pinetop, as she was looking a silvery and trim 75. "Mmm-hmm," he nodded approvingly to her as we flanked him for a photo. "I like ladies with meat on they bones."

Actually, he liked ladies, period. He posed with gentlemanly good humor with my teenage nieces Annie and Kelly when I introduced them to him the summer of 2008. I wasn't sure if they understood who he was, but when I posted on Facebook that Pinetop had passed, Annie posted her photo with him.

Last summer, Susan Antone filled me in on Antone's anniversary show. Was there anyone coming up locally she should know about? The Peterson Brothers Band, I told her, now 12 and 14, a duo from Bastrop, playing bass and guitar with young man blues and a lotta soul. They'd played my Next Up teen band series and demonstrated their capacity to someday catch the mantles lobbed to them by Gary Clark Jr. and Black Joe Lewis. Susan carved out a 20-minute slot for the pair before Pinetop one night. His manager, Pat Morgan, saw the boys and immediately booked them on a festival date.

I last saw Pinetop the Wednesday before South by Southwest, at The Austin Chronicle Music Anthology release party at Antone's. I'm not sure Pinetop knew my name. I was, like many others, "the girl" or "the lady." But he knew my face and appreciated my butt, so as he sat at his little table, scrawling "Pinetop Perkins" in crabbed style on a stack of CDs and photos, I waited for the autograph seekers to get their fill so I could say good night. When it was my turn, I leaned down to kiss him goodbye.

His skin was like fine, old couch leather, its patina worn to a dull glow. His cheek was dry and soft to kiss, crackled from all the smiling.

On Saturday morning, April 2, 2011, Joe Willie "Pinetop" Perkins lies in a casket at the Century Funeral Home on Ashton Avenue in a dusty Clarksdale neighborhood, his final appearance on Earth. Today's is a "homegoing" celebration, according to the program. The lid is open.

Mourners gather and stop to remember, pay respects, tell a tale, take photos, tap the casket, dab their eyes. His hands are folded, and beside him lies his walking stick with the engraved brass nameplate showing. A red-and-white peppermint rests between his thumb and index finger. On a table beside the casket are sprays of cardinal-red roses and snow-white lilies, a photo likeness chosen to commemorate him, and a neatly displayed McDonald's bag, presumably containing a Big Mac and an apple pie, mmm-hmmm.

The minister introduces himself as Henry Espy, the first black mayor of Clarksdale. "To everything there is a season," he begins, the familiar lines from Ecclesiastes filling the small building of white stucco and painted brick. The service falters when a key speaker is late, but Willie "Big Eyes" Smith knows his cue.

This is Smith's second send-off for his longtime friend, with whom he'd recently recorded Joined at the Hip. His friend's celebrity funeral happened in Austin just days before. Smith joined James Cotton, Hubert Sumlin, and a host of friends and fans for Antone's Texas-style musical tribute. Here in Clarksdale, he speaks briefly, pulls out a harmonica, and nods to the young white boy, Clay Swafford, at the piano. Smith cuts loose with a wail and Swafford tears into a keyboard riff.

"Look at him!" Smith crows and stomps his foot to the beat of "How Long," gesturing to Pinetop in the casket. "He's in heaven!" 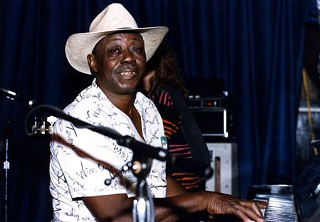 The honors continue with singer Bobby Rush, fresh from his appearance with Pinetop at Antone's during SXSW. "We may not like this, but if we quit, we don't get hamburgers," Rush recalls Pinetop's lecture about playing out a bad gig. Eden Brent pounds the piano next.

Up comes Dorothy Moore, whose 1970s soul serenade "Misty Blue" still commands attention. Moore sings "Precious Lord, Take My Hand," humming deeply in the middle. "My grandma always said it was okay to moan," Moore assures the crowd, "because the devil don't know what you're talking about when you moan."

Others speak movingly of Pinetop and their connections with him, one man poignantly talking about the truly unique responsibility of advising performers in their sunset years.

"Sometimes, it's not about the money," he says.

Mayor Espy requests we leave the service in pairs, singing "When the Saints Go Marching In." Two by two, we march into the Mississippi sunshine.

The funeral procession drives up Highway 61. We're two vehicles behind the hearse, a police escort leading the way into McLaurin Memorial Garden, north of Clarksdale.

"I don't know if I can tell a lady what he and I talked about."

A friend of Pinetop's named Redd looks over his black-rimmed glasses sternly, car keys jingling in his hand, Sunday suit shining as we move toward the tent over the burial site.

"That's okay," I assure him. "Pinetop once took me by the hand and said, 'I write songs about ladies your size.'"

Redd guffaws and slaps the roof of his blue car: "That's him! You did know him!"

An attractive fortysomething woman with light coffee skin stands apart from the crowd, slender arms folded, a beatific smile on her face.

"I met Pinetop when he and my son were nominated for Grammys."

Her son is Lupe Fiasco, it turns out.

After brief consoling words, the services conclude and the casket lid is closed. People break into small groups chattering, making plans to meet shortly at Hopson Commissary (see www.youtube.com/watch?v=932H7qIvLzM) on the grounds of the Hopson Plantation where Pinetop Perkins once worked.

The creak of the casket being lowered cuts through the low murmur of mourners. The mayor clears his throat. "For anyone interested, this is a pine casket."

"And this," says Henry Espy, hand resting on the rich, honey-stained wood, "is a Pinetop." 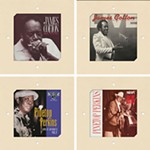 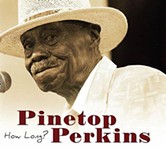