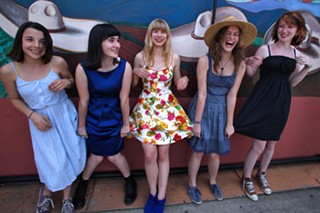 Austin's shredder camp for girls moves into its fifth year this year, and hosts a band that formed there in its showcase. Schmillion is that group, and since meeting at camp in 2009, the local quintet has solidified into an anthemic, teen-girl force of nature, winning the Chronicle's Best U-18 Band award last year. This year: hopefully a debut CD and more general badassery. Beyond that, a slew of similarly sassy bands rock the lineup: Seattle duo Smoosh, Minneapolis' Sick of Sarah, and Colorado's classically trained sister-act SHEL. Oh, and maybe you've heard of the Bangles? If you're a man of a certain age, Susanna Hoffs no doubt caused a stirring in your loins. If you're a woman, of course, you wanted to be the Bangles. – Audra Schroeder 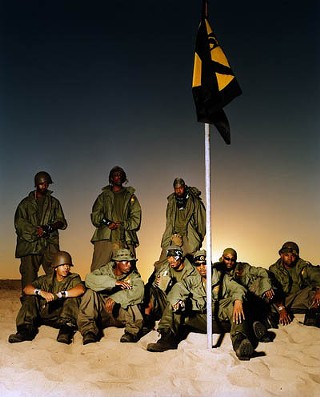 Casual fans may know Colombia as the home of Latin America's biggest pop stars, but what's bubbling beyond Juanes and Shakira in the birthplace of cumbia? Hailing from Cali – the salsa capital of Colombia, if not the world – Pernett brews an intoxicating potion of modern and folkloric sounds on El Mago (the Wizard), from the ethereal dreamscape of "Fantasia Tropical" to the driving Afro-Caribbean rhythms of "La Rumba Bacana – Parte II." Bogotá hip-hop duo Profetas (MC Pablo Fortaleza and African singer Antombo Langangui) fuses high-energy pop-rap with reggae riddims, while Herencia de Timbiqui – named for a town with a rich and proud African heritage – preserves the traditions of the Colombian coast with a mix of contemporary grooves and ancient roots. Perhaps the most intriguing act is De Juepuchas, who, à la Girl Talk, patches together hundreds of short clips from familiar songs (to Latin ears, at least) and vintage soap-opera dialogue into one schizophrenic dance party. – Thomas Fawcett

Girls start the night right with three shades of vocal stylings that play nice, then put a grrrl-power fist to the ribs. No surprise that Mexico's Carla Morrison has caught the attention of Julieta Venegas or Natalia Lafourcade. Morrison's lucid, rich voice may even make you forget her contemporaries, and with last year's critically acclaimed six-song EP, it's clear she's one to watch. The three-member alt-rock/pop She's a Tease, hailing from Monterrey, Mexico, offers a fun and boppy romp through indie-rock-inspired tunes, but it's Le Butcherettes from Mexico City that will blow your hair back. Lead singer Teri Gender Bender's powerful lead vocals can veer from sweet to tart in an instant, inviting comparisons to the Yeah Yeah Yeahs, Girl in a Coma, and Joan Jett. Synth-driven Rey Pila from Mexico City and fellow rocker Adonowsky follow. The evening takes flight late with a mad mix of Mexican soundscapes with urban backbeats from Monterrey's Toy Selectah. – Belinda Acosta

The statement borders on banal, but musical genres are universal. Croatian punk rock sounds just like punk rock from the U.S. or the UK. It probably helps that Overflow sing in English. And alt-emocore from Pakistan (Qayaas) or Luxembourg (Mutiny on the Bounty) sounds just like the American teen-angst variety. Even Swords of Chaos' Scandinavian death metal sounds like Scandinavian death metal (more please, yes). Their being Icelandic sort of makes that tautological, but you get the point. Same could be said of Kvelertak, although they're from Norway, so that's not really helping the premise. Floridians Evergreen Terrace are the odd ducks here, but even if they aren't foreign per se, the street they cribbed their name from doesn't really exist in the physical world, so they still kind of fit. Plus, they're in keeping with the eardrum-bleeding leitmotif. – Michael Bertin

Last time the Wu-Tang killer bees swarmed Austin, all members of the Clan sans ODB (R.I.P.) and RZA dropped poisonous paragraphs in a triumphant tour best described as controlled chaos. The Staten Island, N.Y., supergroup is rarely predictable (or punctual) but always entertaining. The wild card on a showcase dominated by beats and rhymes, funky Afro-punk veterans Fishbone have brought the ruckus since 1979 and are still skankin' after all these years. Houston underground king Trae tha Truth is one of the best rappers from the Bayou City, but has recently garnered more controversy than airplay due to an all-out ban of his music by 97.9FM KBXX that has threatened his livelihood and spawned a nasty lawsuit. Trae's recent album echoes a popular slogan in H-Town: Can't Ban tha Truth. Slim Shady affiliate YelaWolf reps Alabama while electro-hop duo Rocky Business and crunk-rocker Trouble Andrew set things off. The soulful hip-hop stylings of Marz Lovejoy add some estrogen to the evening, along with the selections of a certain Dallas diva moonlighting as DJ Low Down Loretta Brown. – Thomas Fawcett