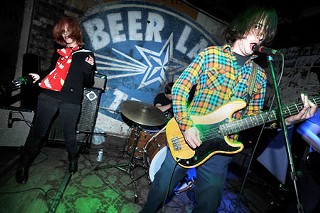 All showcases subject to change


Trey Reimer sums up the feral appeal of Dikes of Holland in just one word.

"It's pretty much madness," he says from the band's South Austin headquarters. "It's loud and fast and something that you can bang your head to. It's definitely something that you need to see live in order to get the full essence of the band."

Gerard Cosloy could vouch for that. The Matador Records co-owner cited the group's Beerland gigs as the main impetus for his Red River compilation, last year's Casual Victim Pile, which was followed up on vinyl last month with volume two. Onstage, Dikes of Holland attack from every direction. Each of the five members – Reimer, John Paul Bohon, Chris Stephenson, Liz Herrera, and Phillip Dunne – contribute to the songwriting and take turns leading the assault. The result's a post-punk carousel of dank Texas psych and badlands provocation, like Poison 13 on a mescaline bender and with a bewitching auxiliary frontwoman.

"Sometimes it feels like we're losing momentum when we change instruments," relates Reimer, who rotates on guitar, bass, and drums. "But that's the most natural thing for us with so many songwriters in the band. It was never meant to be a schtick. In some ways I think it's a good thing for the audience to see that roulette mentality."

The band's eponymous full-length debut for Austin imprint Sundae Records last year emptied every round in the chamber. With song credits divided evenly across the board, the record jolts around every corner, as if chasing shadows down some murky, midnight alley. There's a no-wave intensity carried over from their former instrumental noise-rock act Fire vs. Extinguisher. They've all lived together for several years and self-record all of the band's material.

"The music is such a big part of our lives," Reimer acknowledges. "It's become intertwined with everything we do on a regular basis." – Austin Powell 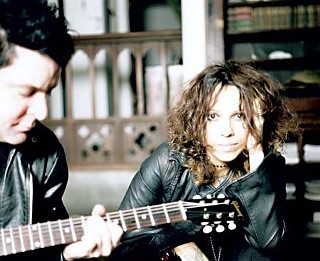 
Linda Perry hasn't just been twiddling her thumbs since 4 Non Blondes ended nearly 20 years ago. Her "real" career as a songwriter and producer began in earnest after the 1990s hit-makers hit the road, with Perry going on to work with pop divas including Christina Aguilera, Gwen Stefani, and Pink. Then Perry found herself in a situation that led to the formation of her new band, Deep Dark Robot.

"I was kind of falling down the path of 'gay girl falls in love with straight girl,' and it was not a good path for me," she confesses. "So I wrote a song to impress her, to show her my heart, my poetic genius. I never got the girl; I got a lot of heartbreak and confusion. She ended up being a muse.

"It's actually perfect because I love the album, and I love the band."

8 Songs About a Girl found Perry working with Tony Tornay of desert-rockers Fatso Jetson, and while the songs might not have wooed Perry's coquette, these pure garage-pop gems will win over just about everyone else and challenge even Perry's own ambivalence about performing live.

"I used to hate performing," she says. "I drank a lot when I was in 4 Non Blondes [because] I hated that band. It was so not me. And I drank a lot, so I was crazy onstage. I was a maniac, and people loved it."

"I don't think about being gay; I just am. And I think that a girl singing to another girl is sexy." – Melanie Haupt


The lead single off his forthcoming album, "Radio," tunes in Raphael Saadiq singing to his musical muse over a rollicking guitar lick shaken from the tree of Chuck Berry and Little Richard: "I'm stone rollin' baby, throwing the dice on the table with you."

"My whole career I've taken chances with everything from wardrobe to music, and when the water was very cold, no one would try it," Saadiq declares. "Nobody was wearing suits and skinny ties. I've always put the dice in my hands and shook up 'em up and thrown them on the table.

"You have to gamble and always believe in what you're doing."

After the success of 2008's Motown homage The Way I See It, the Bay Area's vintage soul man is doubling down on the classic R&B sound of Stone Rollin' while drawing from a deeper well and muddying the water. The sound of Hitsville is still part of the formula, but so are Howlin' Wolf and Sly Stone.

The edge may be new for the former Tony! Toni! Toné! frontman, but nods to his predecessors are the same as ever.

"I haven't changed too much. I've always had throwback references in everything I did. The very first record I wrote was "Little Walter," and it was a throwback to the Chambers Brothers, so it's just kind of who I am. I grew up around a lot of blues and soulful music, and that's what made me want to be a musician. It just naturally comes out." – Thomas Fawcett


Crawling out of the metallic sludge of southern Louisiana's Acid Bath in the 1990s, Dax Riggs has swept through projects that always seemed to hold more influence in retrospect than in the moment. From Agents of Oblivion to Deadboy & the Elephantmen, the Austin transplant has proven as musically expansive as he is prolific, but he may have found his ultimate freedom and sound in finally breaking solo.

"I'm glad that people dig it, and I'm happy to have something like that that people are affected by," offers Riggs of his past bands. "But I think of it as a photograph of me from years ago. It's nothing that I'm threatened by or feel shackled by in any way. I just don't think of music like that. I know I've been introduced to music that I just couldn't accept at the time."

Last year's Say Goodnight to the World (Fat Possum) weaves among its pillars everything from the Cream kickoff of the title track and the Brit-folk tinged "You Were Born To Be My Gallows" to the My Bloody Valentine-like "Sleeping With the Witch." Rigg's talent lies in fusing it all into a coherent whole.

"I'm moved by music that's new to me, and whenever I hear it I want to put a little bit into my sound," reflects Riggs. "I think about half of it just happens naturally, and then there's also the elements I'm consciously trying to fit in there.

"I guess in the end I'd like to bring people coming from where I came from into where I'm at and where I'm going." – Doug Freeman

1am, Billboard Bungalow at Buffalo Billiards


The Gregory Brothers aren't your typical family band. The Brooklyn satirists – brothers Andrew, Michael, and Evan with Evan's wife, Sarah – are the creative team behind Auto-Tune the News, the viral sensation that spawned two of the biggest, most unexpected singles of 2010, "Double Rainbow Song" and "Bed Intruder Song."

In an odd way, the segments tap into the traditional storytelling aspect of hip-hop artists championed by Slick Rick, only filtered through the hyper-gauze of mainstream media and modern hip-hop radio. "Bed Intruder Song" was viewed more than 50 million times on YouTube in its first six weeks alone and turned Antoine Dodson into a household name. The single even broke onto the Billboard Hot 100 chart, reportedly pushing more than 100,000 in digital sales.

"Yes, Auto-Tuning does make everything sound better, but it does not do that equally to all unintentional singers," clarifies Anthony Gregory from the group's new office studio in Williamsburg, Brooklyn, the day after the band's custom, four-movie mash-up aired as part of the Academy Awards. "For that first video that we did put Auto-Tune on, which was the [2008] vice presidential debate, we were actually lucky that it was Palin and Biden. They turned out to be two of the greatest unintentional singers of all time.

"They're just so passionate and screaming all of the time about America, whereas Obama and McCain were so measured and thoughtful."

The siblings actually released a studio EP in May 2009, Meet the Gregory Brothers!, a surprisingly straight-faced collection of suburban soul and lounge tunes, and all four have ongoing side projects. The band's appearance at SXSW marks the start of what's being called the DigiTour, an attempt at bringing the YouTube videos to the stage with epic bombast.

"Imagine you're at home watching the video by yourself and how funny it is," teases Anthony. "Now imagine how much more awesome it's going to be watching it on a screen 100 times that size, with a rock band playing along with it, and you're dancing with 300 of your closest friends." – Austin Powell