1am, Creekside at Hilton Garden Inn 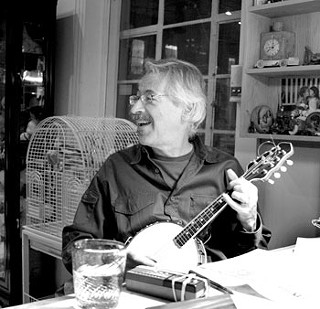 One thing's for sure, Peter Stampfel isn't your typical 72-year-old.

Not only is he active on Facebook, which is where this writer found him, but he's playing the Festival with a trio of twentysomethings. He describes his band, the Ether Frolic Mob, this way: "[A] collective of about nine people who are never around at the same time. There might be a gig with two or three people, or one with seven or eight.

"There's never been a gig where all nine people show up."

This week his mob will be the Dust Busters, which features guitarist and banjo player Walker Shepard, son of playwright and actor Sam Shepard. Ironically, the elder Shepard was once a member of the Holy Modal Rounders, the psychedelic folk group that brought Stampfel notice beginning around the Kennedy administration.

"In 1959, I moved to New York," he recalls, "and felt that I shouldn't play any post-1939 notes. That's actually what I endeavored to do. I had heard Harry Smith's Anthology of American Folk Music and thought, 'If I don't keep this old stuff alive, it'll die out.'

"That banner was taken up by hundreds or thousands of people," he adds with a chuckle.

At this late date, Stampfel appears to be more creative, or at least prolific, than he's ever been, having released five discs over the past year or so. One with renowned New Orleans producer Mark Bingham was actually recorded in 1999, another featured folk/performance artist Baby Gramps, and Stampfel's daughter Zoe collaborated on a third. Traveling to Rotterdam in the Netherlands for 2006 documentary The Holy Modal Rounders ... Bound To Lose – directed by Austinites Sam Douglas and Paul Lovelace – he recorded with a band there, and he also made an album with cartoonist/anti-folk artist Peter Lewis, so they had something to sell when they toured Europe in January.

"As the closing shadows start to loom, I'm paraphrasing here," he cackles. "The prospects of being hung the next morning focuses one's mind amazingly well."