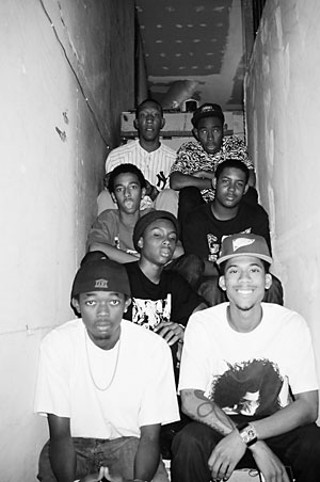 Here's the Odd Future roster rundown: The leader is Tyler, the Creator. Then it's Domo Genesis, Mike G, the Jet Age of Tomorrow, Jasper Loc, and Taco Bennett. Hodgy Beats and Left Brain team to form MellowHype. There's Earl, sorta; he's currently MIA, and no one's talking about it. Finally there's Syd, who's engineered every piece of the group's already massive catalog and, as the group's lone female, has a remarkable amount of patience.

All between the ages of 16 and 19, they're either the smartest delinquents in Los Angeles or the most obnoxious geniuses making music today. Wherever on that scale they fall, the collective – officially named Odd Future Wolf Gang Kill Them All – is unconscionably addicted to making hard-banging, controversial, at times shockingly offensive Pharrell-influenced hip-hop, all of which they've so far released for free on their Tumblr page. That trend ceases in May, when XL Recordings releases Tyler, the Creator's Goblin. Then plan on the floodgates opening.

"I have just about 40 wolves behind me," writes Hodgy Beats. "It's a fucking bunch of us, and we have a lot of personal goals."

"Everybody with money has to buy some unnecessary shit," Hodgy points out.

Tyler chimes in with his wish list: "Fuck More Bitches and Piss White People Off. And get Justin Bieber To Be From OF."

Easier said than done. Fortunately, they know talk is cheap; their sudden fame can be forgotten just as quick as it came if they start catering to what the public is looking for.

"Hell no, we don't want to blur out anything," writes Left Brain, who can usually be found behind the boards with Syd during gigs. "We don't like clean versions ... straight raw forever." Prepare for an Odd Future.