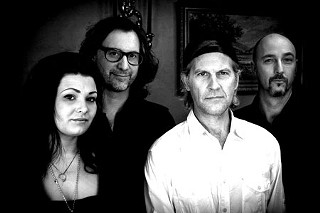 Men Without Hats, which rocketed to fame via Top 10 U.S./UK hit "The Safety Dance" in 1982, kick off their You Can Dance If You Want Tour at SXSW. In these cyber-spatial times, mere anachronism's been loosed upon the world and everything's got currency for someone, so who's to say what's new anymore? We spoke to eternal MWH epicenter Ivan Doroschuk about then and now:

Austin Chronicle: Disregarding any idea of nostalgia, and even what a terrific song "The Safety Dance" is, what's it like having created such a powerful cultural touchstone?

Ivan Doroschuk: I'm constantly amazed at what goes on with that song. My all-time favorite was the Beavis and Butt-Head thing. The punch line was something like, "This guy keeps saying he can dance, but he can't dance."

AC: Why did you choose to set the song's video where you did, with the Morris dancing and the maypole and all?

ID: Well, we were originally signed to an English label called Statik Records, and they had bands like the Slits and the Chameleons UK. It was a really small label, and their people put the video together. It was Tim Pope who did that, who also did most of the Cure videos.

AC: Has the Internet helped your music sales?

ID: Oh yeah, I think it's helped everything. I've discovered so much music myself that I would've never have known about. Even music from my generation – I'm constantly discovering bands from the Seventies that were just awesome bands but they went by unnoticed.

AC: With SXSW and returning home to Canada, will you return to Austin as part of your new tour?

ID: I'm sure we will, yeah. And I'm really looking forward to playing South by Southwest. I put Alex Jones on the guest list; I hope he shows up.