First impressions can last a lifetime. Black Books breaks the ice with a four-song offering limited to 150 physical copies but available for free download on the local quintet's website. Lifting off like a CliffsNotes version of My Morning Jacket, An Introduction To airs out on electronic gadgetry in lieu of guitar, a comparison driven home by drummer and singer Ross Gilfillan's reverb-yelps in the aqueous "The Big Idea" and more upbeat "Maria." Federal! State! Local! fairs just as well on its rebooted debut, I'll Put It On When I'm Dead (Vagabond Collective). The homegrown sevenpiece stitches together loose-knit indie folk of the Park the Van variety, most notably the easy beat of "Bottle of Whiskey." Drew Smith ditches his Lonely Choir for Ted Songs (Viro), an acoustic side project with Brian Beken of South Austin Jug Band, but the end result's the same: jaunty Americana-pop with a Harry Nilsson streak. Smith's arresting delivery is the linchpin here, but his wit and knack for character sketches share the spotlight in "Abe, Jack, and Superman" and "Squeezing the Elephants." On the opposite end of the spectrum plows Bridge Farmers. The local quartet's Din of Celestial Birds burns an effigy of Southern psych metal, Ultramega OK-era Soundgarden, and Motörhead's black grease. That's a combination normally reserved for Japanese metallurgists, but Bridge Farmers nail it right out of the box. The slide guitar-accented "Ummo" sets up the dual guitars cradling bad moon boogie "Equus" and cosmic ballad "Acid Tongue." Nine-minute rave-up "Piercing the Valley" seals this six-song kerosene dream like melting wax, the strongest local debut EP since Voxtrot's Raised by Wolves. 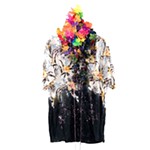 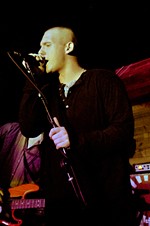