The most memorable moments of Free Week for OTR also happened to be the most destructive: Shells' bassist Michael Caviness throwing himself into the drum kit at Beerland, Shitty Carwash's Joe Pennenbacker hurling his guitar up a flight of stairs at Mohawk, and JJ Ruiz doing the exact opposite inside Emo's as Wild America wrapped up its final club show. From the taunting provocation of Elvis to Flesh Lights' blitzkrieg garage-bop, local acts were going for broke and leaving quite an impression in the process. Here are some other field notes not accounted for in this week's "Live Shots."

It might have been New Year's Day, but Motel Aviv flashed back to the 1980s, turning Beauty Bar into a convincing metro-rave that called to mind the early post-punk energy of U2 and the Smiths. Call it Neo-Romanticism. The Gary closed down Beerland with blue-collar anthems of suppressed intensity, threatening but never quite boiling over.

The Gary (Photo by John Anderson)

Not to be confused with the longstanding local power-pop group, Shells is a tight country-soul outfit disguised as a power trio, with Bakersfield crackle and classic rock showmanship. The band's closing rave-up "I Am a Number" at Club de Ville could hold its own at the next 1967 hoot night.

Emo's Sports Bar? If Tim League can turn bowling into cocktail entertainment at the HighBall, there's no reason why Red River baron Frank Hendrix couldn't pull a similar feat with the outside batting cage. OTR knocked off the rust at the Alternative Softball League's happy hour with a torrential, tribal noisetrack provided by improv wrecking crew Expensive Shit. As the Sugar Bowl rolled on the big screen, Half Mile Fox Fur put its own slant on nerdcore, fusing Shellac's calculated rage with awkward teen angst.

Add Smoke & Feathers to Austin's choogle revival. The fourpiece has tightened its sound since recording with producer Frenchie Smith, closing on what sounded like Pink Floyd's "Shine on You Crazy Diamond, Pt. 1" envisioned as a Southern eulogy.

Orville Neeley produced the Strange Boys' last album and co-fronts the excellent Bad Sports. Outside at Emo's, OBN III's proved his rock & roll circus, a big beat revue of atomic delinquency, anchored by members of A Giant Dog and a young buzzsaw guitarist that played James Williamson to his inner Iggy Pop.

Wrangling a Western saloon's worth of guitar slingers and drunken poets, Mike & the Moonpies delivered honky-tonk heartbreak at Mohawk better than most old-timers and Nashville ringers. Don't miss their Monday night residency at Hole in the Wall.

Ready for the big screen: Crooks

The classic country voice of Austin's Heybale!, Gary Claxton took his own life on Thursday, Jan. 6. He was 50. A soft-spoken Oklahoma-born Native American, Claxton (pictured far left) joined Heybale! in 1994 during the band's tenure in Nashville with founder Tom Lewis. He relocated locally after attending a Buck Owens Birthday Bash in the late 1990s at the Continental Club, where the band's Sunday night residency became an Austin institution (see "On Any Sunday," June 24, 2005). The weekly show served as a memorial last weekend, with the friends and family gathering to hear Claxton's recently completed albums with Heybale! and Flat Top Jones. "He was a singers' singer. The best around," wrote Heybale!'s Earl Poole Ball via e-mail. "To me he was the most disciplined musician and person I have ever known. A little brother who led the way in many things both personally and professionally. He was my closest friend."

Last Thursday's showcase at Mohawk doubled as a launch party for the Revival Fund, a new nonprofit inspired by the late Jon Pettis that aims to provide temporary financial assistance to Austin musicians and their families in times of crisis. Judging from recent events, there's clearly a need locally for this kind of service. Learn more at www.therevivalfund.org.

Gilbert Alexander, better known as Lil Daddy, a staple at Antone's shoe-shine stand for three decades, died on Friday, Jan. 7, after suffering a heart attack at the blues club on New Year's Eve. He was 85. "He's one of those people like Albert Collins that always made you feel better," says Susan Antone. "He became part of the spirit of the place." A service will be held on Saturday, Jan. 15, 1pm, at St. Paul Primitive Baptist Church (2209 E. 14th). A ChipIn account has been created to help raise funds for the expenses. www.j.mp/e9a3mb.

A ChipIn account has also been started for John Fox (Artly Snuff) of the Uranium Savages, who's still in intensive care after a Dec. 30 car accident. www.j.mp/gY0NYD.

Golden Dawn leader George Kinney has been diagnosed with liver cancer. While the condition was caught in an early stage of development, the Texas psych pioneer needs help covering his extensive treatment and medications. Pledge support through PayPal: kinney777@gmail.com.

South by Southwest 2011 dropped its initial schedule grid on Wednesday afternoon. While lacking some previous confirmations (Bright Eyes), the list includes Freddie Gibbs, Gayngs, the Jim Jones Revue, the Kills, and the Omar Rodriguez-Lopez Group. Meanwhile, former Boomtown Rats leader and activist Bob Geldof has been confirmed as the keynote speaker – on St. Patrick's Day no less – and performer. Other panelists include Houston rapper-turned-impresario Chamillionaire and financial analyst Duff McKagan.

The Austin Songwriters Group kicks off its seventh annual Songwriter Symposium tonight (Thursday) at the Omni Hotel at Southpark with a special performance by Brett James, who's also hosting a writing workshop with Tonio K. www.austinsongwritersgroup.com.

Okkervil River premiered a new single, "Wake and Be Fine," on Late Night With Jimmy Fallon on Monday, Jan. 10, assisted by the New Pornographers' A.C. Newman and Questlove. According to the host, the band's new album, I Am Very Far, is due May 10. Check it out in this week's installment of Wednesday Rewind: austinchronicle.com/thenextepisode. 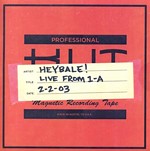