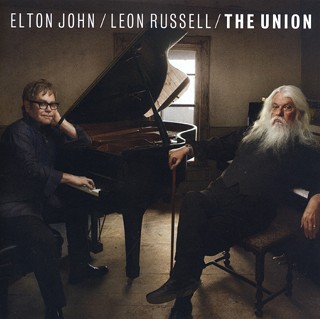 
Rather than a true joining together, The Union delivers the best Elton John/Bernie Taupin album in decades thanks to Leon Russell's Dixie omnipresence. The team behind 1970's Tumbleweed Connection and Honky Château ('72) contribute eight of 14 tunes, the best of which, "Gone to Shiloh," sounds like a Leon Russell song, a Civil War lament beginning with the Oklahoman's waves of grain vocals and a fragile verse by Neil Young. Chugging rocker "Monkey Suit" might already be slated for John's next greatest hits. The master and disciple meet at the gospel chorus crossroads and double pianos of "Hey Ahab" and gorgeous "I Should Have Sent Roses." Too often The Union loses out to John's and Taupin's melodrama ("There's No Tomorrow"), though when their aural staginess works ("When Love Is Dying"), John's irresistible. At 63 minutes, the LP's cluttered ("Jimmie Rodgers' Dream"), but as framed by a pair of Russell compositions, its structure saves it. Opener "If It Wasn't For Bad" ("you'd be good"), with a session posse including Booker T. Jones, Marc Ribot, Jim Keltner, haunts positively Gershwin, while spiritual "In the Hands of Angels" closes equally breathtaking. The Union should've been a Leon Russell album produced by Elton John and titled The Confederacy.