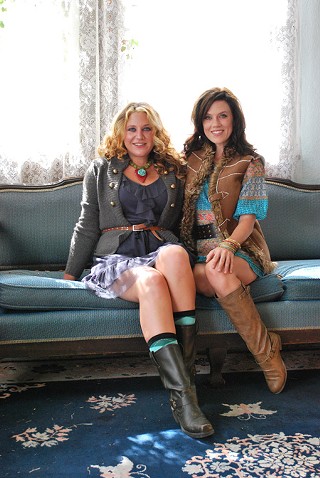 On the cover of You Can't Take a Bad Girl Home, the Fabulous Ginn Sisters (that's a hard "G," as in "guilty") stare out with a stark, Xerox-quality attitude as heavy-lidded, pouty-lipped, hip-cocked rockabilly queens. In person, their pure Texas bloodlines give way to a fresh-faced, corn-fed sweetness – one that equally suggests they've already hoed tough rows.

At 32 and 31 respectively, Tiffani and Britani Ginn are nearing the end of a decadelong cycle that brought them to Austin following the path to education and took a sharp turn into music. That's the story of local musicians from Janis Joplin to Bob Schneider. Tiffani married singer-songwriter Bill Passalacqua and Britani lives with Bill's brother Larry, however, the Dixie Chicks they are not.

Onstage, the Ginns are living testament to the magical way of family, talent, and vocal ambition. The women of You Can't Take a Bad Girl Home are staking their claim.

Born and Raised in Schulenburg

"Born and raised in Schulenburg" sounds like a chamber of commerce slogan or maybe something seared onto a side of choice beef. When Tiffani applies it to the Ginns, it becomes a stamp of authenticity. In Texas, authenticity is valued almost as much as instrumental proficiency and songwriting skill. Authenticity can't be artificially created.

According to the town's Chamber of Commerce, Schulenburg – German for "school town" – sits 80 miles southeast of Austin, with a population of approximately 2,500. The farm and cattle community with a rich German and Czech background also embraces the arts: A handful of churches painted in the European tradition dapple the surrounding fields and hills, as do dance halls, some restored to original luster.

Dance halls are key, because musical tradition runs river deep and family strong in the Ginns of Schulenburg, so strong that Britani recalls being "tiny, really little, and we'd get out of school and go sing at the Lion's Club or at a wedding." The Unplanned Parenthood Association, as the Ginns' parents' family band is known, and the Pettit Brothers Band, a family offshoot act, started the girls performing as soon as they could.

"My sister had an old record player when we were little," Tiffani mused about influences. "And our grandparents had an Italian restaurant with an old jukebox. Whenever they'd take the old 45s out and put the new ones in, we'd get the old ones. So we had this awesome record collection – Cyndi Lauper, Boy George, Ricky Skaggs, Hank Williams.

That the sisters would pursue music together was not fait accompli, though after "the second round of dropping out of colleges," Tiffani laughs, Dame Fortune sent an invitation.

"We played an open mic at the Cactus Cafe, 2002," she says. "We ended up getting a bunch of gigs from that night, and that was it. We dropped out of school and never looked back."

For Britani, the epiphany came even before that: "When we moved to Austin, we'd decided, 'We're not going to sing covers any more, this family band music.' Tiff was going to school for dance; I studied classical flute. Suddenly, I hated the music thousands of students have played for hundreds of years. I didn't want to sing the same songs as my family.

"We had our own songs to sing."

Their own songs surfaced first on the Ginn sisters' debut, 2003's Generally Happy, but it was Blood Oranges three years later that harvested well-deserved attention. The lustrous mix of twang, soulful roots folk, and sweet dual vocals gave them entrée to bills with Delbert McClinton and Robert Earl Keen and an auspicious friendship with Canadian alt.country favorite Fred Eaglesmith. According to Britani, Eaglesmith's production of Bad Girl brought crucial veteran expertise to the Ginns' evolving sound, while Tiffani points out that touring with Eaglesmith for two years didn't hurt.

"We were on the road with Fred, playing with a rock & roll band every night while continuing to write music," explains Tiffani. "We didn't plan to make an album; we went to just record some songs. Once we went in, we didn't finish until the record was done.

"And our sound changed. Some people are going to miss the countryish sound. Some will find the new rock sound refreshing and different. As your writing changes when you go to a new place, your sound changes, too. We're spoiled touring with Fred and his audience. They are listening to every word you sing. They are talking to you about your lyrics after the show. That's a real treat, an audience that digs the music."

The authenticity Tiffani and Britani Ginn bring to You Can't Take a Bad Girl Home was earned sometime in their 20s when their lifetime in music hit the so-called 10,000-hours mark. That's a key component of success, believes author Malcolm Gladwell, who examined the phenomenon in his book Outliers. He reminds us that Fleetwood Mac put out 16 albums before Rumors rained down platinum. The Beatles performed more than 1,200 times before storming America in 1964.

Ten thousand hours. It's a lesson worth remembering. The Ginns quite possibly reached that plateau even earlier, in their teens, imbuing them with an expertise that shows up in their songs. Tiffani, who writes, plays guitar, and sings lead, composed all the material on Bad Girl except the track co-written with her brother-in-law, Larry Passalacqua. For her, the art of writing is balanced by the challenge of working with her sister, who plays flute and sings.

"We've learned to deal with [conflict]," acknowledges Tiffani. "We've gotten better as we've gotten older. If one doesn't love what the other brings in, that's when we say, 'How about this instead?' If it's not ideal for both of us, that's when the collaboration starts."

"We are so close," Britani agrees. "We function better together than apart. It's almost better when we don't agree, because then it's a joint creation."

A joint creation of separate lives, in fact, and not just onstage and in the studio. Tiffani was reached in the RV she, husband Bill, and their 2-year-old son live and travel in throughout Texas; Britani spoke from southern Illinois, where she now lives with Larry. That's far from the days of shared living quarters, and for right now, it works for the Fabulous Ginn Sisters.

"I can't imagine doing it any other way. Well ...," hedges Tiffani with a laugh, "sometimes I fantasize about touring with a nanny and a really big bus instead of an RV."

The Ginn Sisters put in a couple of hours at Jax for their CD release, Friday, Nov. 19, 8pm.