Sérgio Dias Baptista was only 15 when he and his older brother debuted Os Mutantes in their native São Paulo in 1966. Early next decade, Arnaldo Baptista had become a psychedelic casualty, while singer Rita Lee flew the original trio's coop for solo obscurity. Beatles-esque Brazilian pop, dubbed "Tropicália" and blue-printed also by native practitioners Gilberto Gil, Caetano Veloso, and Tom Zé, had by this point already frozen in time. The same cannot be said of Sérgio Baptista. When the singer-guitarist rebooted Os Mutantes for a new millennium, global fanatics from Devendra Banhart to the ghost of Kurt Cobain danced a private jig. Unfortunately, last year's Haih ... or Amortecedor ... (Anti-) mashed together enough avant-garde pop pretensions to suggest that Sérgio had tripped through the same doors of perception his brother had torn off the hinges. Coming off the band's 2009 local debut at Antone's, Os Mutantes' Fun Fun Fun Fest appearance began in the same manner – peyote casserole. Dressed like a hippie Randy "Biscuit" Turner in a cape and purple Indian kurta, the frontman led the band in an a cappella intro. For sheer euphony, you can't beat Portuguese with a rain stick. After those 10 seconds, things got weird. Wild bird noises, Jethro Tull flute, operatic chants – recognizable styles came and went like falling leaves. Crosby, Stills & Nash; the Partridge Family; Traffic: All went into the musical Cuisinart. When the septet (double keyboards, two guitars, bass, drums, and Rita Lee stand-in) flourished 45 minutes later with "El Justiciero," from what would have been 1970's fourth Os Mutantes LP, Technicolor (completed in 2000), the cha-cha-cha hybrid of Queen and Danny Elfman began making sense. No composer stands still over a celebrated half-century career, but less remains a viable alternative to more. 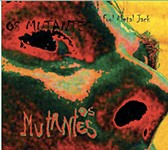