Dare To Be Stupid

Comedian Todd Barry got at least one thing right during his set of deadpan, observational humor last Friday night in Waterloo Park: "They should call this Distractions Distractions Distractions Fest." The fifth annual Fun Fun Fun Fest offered something for children of all ages – a skate ramp, graffiti walls, Anarchy Championship Wrestling, a mechanical bull, even Euro-bungee – in its indie circus of punk/hip-hop/metal nostalgia for the attention-deficit generation.

The mock-epic pomposity of Magnifico opened the festival's kickoff half-day with such "originals" as "Bohemian Rhapsody," but the local Queen tribute act passed on "Another One Bites the Dust" out of respect for "Weird Al" Yankovic ("Another One Rides the Bus"). The polka/parody kingpin and pop culture punching bag rewarded in kind later that night with a multimedia extravaganza that offered the next best thing to canceled headliners Devo in "Dare To Be Stupid." Likewise, Austin's ArcAttack shocked and amazed on the south patio, conducting space-age surf-rock via twin homemade Tesla coils. Imagine Man or Astro-Man? filtered through a bolt of lightning. 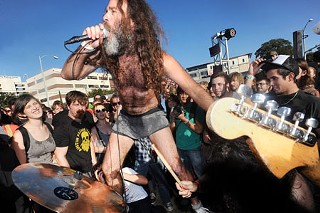 Though some two-day passes were still available, Saturday produced FFFF's first single-day sell-out for promoters Transmission Entertainment, thanks in no small part to Bad Religion's doomsday rapture and the psychedelic bliss of MGMT, which trumped the band's June touchdown at Stubb's. There was a perfect balance of old school and the new breed: the Gories' minimalist garage rock shadowing the black grease of Austin's Woven Bones, Os Mutantes' vintage tropical psychedelia reverberating through Ariel Pink's Haunted Graffiti, and Detroit femme-C Invincible countering the novelty appeal of man, myth, "Ruler" Slick Rick with speed-lectures of crime and punishment. Local hip-hop faction the League of Extraordinary Gz, backed by D-Madness and DJ NickNack, provided a contact high on par with Devin the Dude.

Elsewhere on the local front, Hatred Surge, featuring two-thirds of Mammoth Grinder, more than lived up to its name with an extreme grindcore assault with shards of tonal fury, and the fourpiece Eagle Claw mapped the instrumental blueprint for Mastodon's headlining Leviathan. Other highlights included NOLA bounce queen Big Freedia, the death-defying stunts of Monotonix and Peelander-Z, the monolithic bludgeoning of Florida's reunited Floor, and most surprising, the full-blown rave led by international neo-disco starlet Yelle on the Blue stage Sunday.

Upcoming renovations to Waterloo Park for the Waller Creek Tunnel Project (see "Off the Record," May 7) should necessitate a move for the F3F next year. If not, OTR would recommend installing some water refill stations and additional lighting, but those are minor concerns to an otherwise incredible Festivus for the rest of us, especially in light of the Descendents' heroic finale.

On roughly one week's notice and in the band's first public appearance in a decade, the L.A. punk outfit barreled through a frantic 75-minute set – epic by hardcore standards – that hit every shout-along in its classic catalog ("I'm the One," "Bikeage," "I Don't Want To Grow Up") and even paid respect to Devo with a berserk rendition of "Uncontrollable Urge" (see "Live Shots"). As frontman Milo Aukerman huffed during the encore, "I'm actually just relieved I can still do it." So say we all. 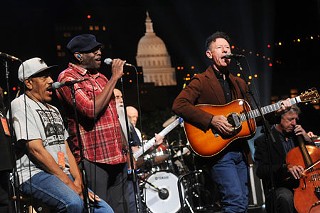 Austin City Limits' final taping in Studio 6A on the University of Texas at Austin campus with Lyle Lovett a day after Fun Fun Fun Fest wasn't The Last Waltz one might expect from such a milestone. In fact, the only cameo appearance Monday was an unrehearsed duet with Ray Benson on Bob Wills' "Blues for Dixie," prompted by the Asleep at the Wheel driver's opening toast. Instead, Lovett did what he does best – pay tribute to his building blocks with sophisticated charm. "I bothered [ACL] enough they finally let me on," he joked at one point, referring to his first appearance on the program as a member of the audience, then as a backup singer for Nanci Griffith in 1984. Lovett's near-two-hour large ensemble revue touched every cornerstone of the show: singer-songwriters (Townes Van Zandt's "White Freightliner Blues," Eric Taylor's "Whooping Crane"), gospel ("I Will Rise Up"), blues ("No Big Deal"), rock (Jesse Winchester's "Isn't That So"), and Willie Nelson (a funky "Funny How Time Slips Away"). After welcoming the entire staff onstage for historic encore closer "Closing Time," Lovett offered his best wishes: "Here's to another 36 years." To further commemorate the occasion, the staff and alumni of ACL reflected on their first tapings. austinchronicle.com/earache.

Devo canceled its headlining appearance at Fun Fun Fun Fest, but co-founders Mark Mothersbaugh and Gerald Casale jammed with Austin's Octopus Project over Halloween weekend at Moogfest in Asheville, N.C. After being approached about the opportunity through their booking agent, the local instrumental luminaries learned "Beautiful World" (by request) and "Girl U Want" (on their own accord) en route from Tucson. "It's impossible to put into words just how awesome it was," relays multi-instrumentalist Josh Lambert, who helps bring the Project's recently released double-LP opus, Hexadecagon, to life at the East Side Drive-In on Dec. 3. "These are our idols, and they're superamazing dudes, really down to earth and totally awesome." The Chronicle recently spoke with Casale. Check it out at austinchronicle.com/earache.

Sam Baker and Patricia Vonne host Texas Burning: A Lone Star Salute to Our Troops, a live concert tribute to our armed forces, featuring Ruthie Foster and Carolyn Wonderland among others. The special airs on KLRU tonight, Thursday, Nov. 11, 9pm.

Adding to the candles for her 60th birthday, Rockabilly Filly Rosie Flores is being presented with the inaugural Revolutionary Rock Award by Girls Rock Austin at Jo's on South Congress on Saturday, Nov. 13, 1-3pm. The celebration also boasts performances by Schmillion and Charlie Belle. 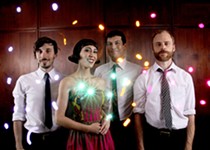 Playback
Octopus Project returns – with vocals! Plus, inside the foliage at Austin City Limits.