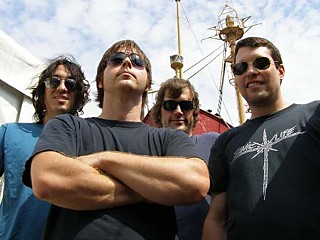 Within the Chapel Hill, N.C., scene of the 1990s, Polvo was the odd band out. Superchunk had the pop-punk bombast, Flat Duo Jets the surf tones, but vocalists/guitarists Dave Brylawski and Ash Bowie, plus bassist Steve Popson and original drummer Eddie Watkins, forged their own sound that seemed devoid of influence or mathematical structure. If anything, Bowie and Brylawski were Southern counterparts to Television's Richard Lloyd and Tom Verlaine.

"I guess I'd prefer 'psychedelic' if I had to put it in any box," Brylawski says from his home in New York City. "It's funny though because there was a time when I saw Tom Verlaine every day here. He's definitely a guitar hero, and I have many."

The band spanned almost the entirety of the 1990s, producing four lurching, intricate albums for Merge and Touch and Go before disbanding. Close to another decade went by before Austin fans Explosions in the Sky invited Polvo to play the 2008 All Tomorrow's Parties they curated and got the quartet – with new drummer Brian Quast – back onstage.

"We had no intention of getting back together before then," Brylawski remarks. "I think one of the things ATP likes to do is provide incentive for bands to get back together, and Explosions made a wish list. I have no idea if we were on the first page or the third page."

Either way, it was the catalyst for Polvo's reformation, which in turn led to last year's Merge LP In Prism. Another album is in the works, and with the idea of touring again on the table, Brylawski cites his day job in the mental health field as a boon. "When you're young and can just get in a van, it's great," he notes. "When you're older you can see the luxury of leaving your job to play in a band. So, it's good to split your mental energy between reality and fantasy. They're sort of antidotes to each other." 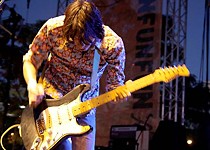