Crazy for You (Mexican Summer)

Crazy for You (Mexican Summer)

King of the Beach (Fat Possum)


Blazed West Coast couple Bethany Consentino (Best Coast) and Nathan Williams (Wavves) seem like the perfect pair: She's got the blissed-out melodies, and he's got the danked-out pop-punk. Best Coast's debut is ostensibly about her boyfriend, if breezy opener "Boyfriend" or the catchy title track didn't make it clear. Consentino's certainly got an ear for a hook, and her trio makes good use of them, but you can only sing about your cat, weed, and loneliness for so many songs. Half of Crazy for You could have been cut in 7-inch doses. King of the Beach, Wavves' third and least lo-fi LP, guests Jay Reatard's onetime rhythm section on skate-punk love songs "Post Acid" and "Idiot," but it's half-baked as well, never distinguishing itself from other rock & roll throwbacks. If the two halves merged, they'd be golden. 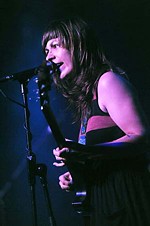