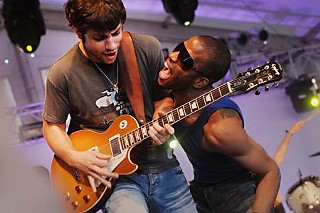 
Few artists can weave their way from Southern rap to show tunes without missing a beat, but few have the charisma and talent of Trombone Shorty. The 24-year-old trombone and trumpet player (née Troy Andrews) and his sixpiece Orleans Avenue brought nothing but heat and had a packed Clear 4G tent jumping. An incredible horn player and surprisingly effective singer, Shorty commands the stage with the swagger of an MC, his opening horn stabs hitting as hard as any hip-hop beat and practically begging for a guest verse from Weezy. The band tapped into this year's Allen Toussaint cover "On Your Way Down" but hit its stride here with crowd-pleasing medleys. The band riffed off Mystikal and the Black Eyed Peas and gave a musical tour of New Orleans, covering the Meters and the theme from HBO's Treme (on which Shorty has appeared) and impersonating Louis Armstrong on a version of "When the Saints Go Marching In" that broke down into the Violent Femmes' "Blister in the Sun." Above all, Shorty's a showman, which he proved by holding a trumpet note for nearly a full minute on "Sunny Side of the Street" and burning up the stage on a cover of James Brown's "I Got the Feelin'."