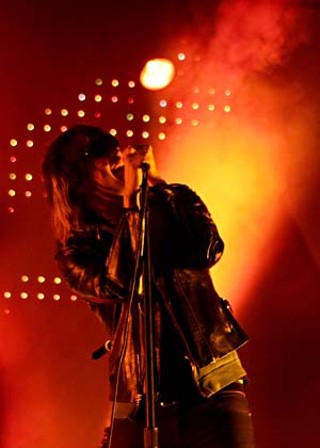 
By God, Charles Attal was right. C3 Presents' chief booker, still flush with another Lollapalooza extravaganza this summer, proclaimed the reunited Strokes the highlight of this year's ACL counterpart in Chicago. Performancewise, all of Friday at Zilker Park built toward the NYC quintet's stunning walk-off performance. Beginning 15 minutes late and finishing 15 minutes early, the tight one-hour set rang aurally iconic from the opening notes of the group's first song on its first album, the title track to 2001's instant smash Is This It. Like Oasis' Liam Gallagher in the 1990s, Julian Casablancas' anti-frontman skulk trademarked the Strokes' bigger-than-the-Beatles garage rock, only now the frontman – dressed here in a hoodie, leather jacket, and sunglasses ("I can't see shit, 'cause like an asshole I wear sunglasses at night," admitted the singer) – joked instead of mumbled. Drummer Fab Moretti, second only to Sonic Youth MVP Steve Shelley on engine beats, and lead guitarist Albert Hammond Jr., with his thin-white-duke suit and stabbing ice-pick riffs, did the rest: "Hard To Explain," "You Only Live Once," "Someday," "Juicebox," "Trying Your Luck." Split evenly between the group's first and third discs, the set shuddered to a climax with the drill-bit exhilaration of "Reptilia" from 2003's Rooms on Fire. "Last Nite" and "New York City Cops" followed before the "fake encore," which ended with "Take It or Leave It." We'll definitely take it.