Long Road Out of Eden

The 2010 Austin City Limits Music Festival will be remembered as the year when the distinction between band and brand got lost somewhere between the visuals masking global rap diva M.I.A. and the confetti raining over the Flaming Lips' euphoric symphony. From the towering setup for aggressive house specialist Deadmau5 and Muse's extravagant decadence to the European electro-throb of Miike Snow and Dan Black, artists were looking to go big, with cult favorites Edward Sharpe & the Magnetic Zeroes and gypsy punks Gogol Bordello in particular finding serious strength in numbers.

Call it the Gaga effect.

In ACL's ninth year, C3 Presents continued to refine its blueprint for a world-class, destination festival, with the addition of a stone drainage system for the VIP Grove, complimentary bag checks in the media area, and most importantly, vastly improved water refill stations, which topped off an estimated 223,700 bottles over the weekend. The local promotion company's contract with the city of Austin increased the capacity from 65,000 to 75,000 per day for the first time since 2004, but OTR had no trouble navigating Zilker Park. The maddening din for the Black Keys and Spoon on Friday actually had more to do with schedule conflicts – or the complete lack thereof – with Pat Green and Slightly Stoopid, respectively.

There was no excuse for the nearly inaudible sound treatment afforded San Francisco's illustrious Girls, among others, but Balmorhea captain Rob Lowe spotted the silver lining: The first set of the day often rings truest thanks to small crowds and time afforded for a proper sound check. That was certainly the case for Saturday's transcontinental indie folk sampler: Toronto's earthy Basia Bulat, the upbeat flair of Illinois' Lissie, and Sweden's fleet foxes First Aid Kit, which delivered a stunning rendition of "Tiger Mountain Peasant Song." 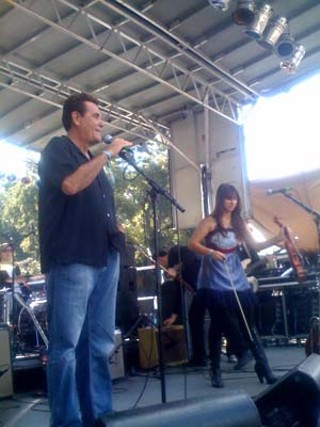 ACL 2010 again offered something for everyone, delivering headliners that did in fact deliver – the Strokes, Phish, the Eagles – and a middle tier that spanned from the finest unsigned band in the country, Louisiana's perky Givers, to the minimalist melancholy of recent Mercury Prize winners the XX in the Londoners' last live performance of the foreseeable future. Florida's J.J. Grey & Mofro offered swampy, blue-eyed soul on Friday, while Robert Earl Keen surprised the Austin Kiddie Limits stage on Sunday. Even local poet Thax Douglas found his way to the stage, introducing Yeasayer not long after billionaire Jim Dolan proved on the BMI stage fronting J.D. & the Straight Shot that money can buy just about everything except for a winning season in Madison Square Garden.

The only thing missing was Gayngs – or more accurately, Gayngs' gear. The Minneapolis collective reported it stolen Saturday at 4:20am (seriously) following its Emo's afterparty, though according to the Minneapolis StarTribune, the band's bus driver was reportedly ordered back home due to a lack of payment by Gayngs. Austin's Lance Herbstrong made the most of the last-minute cancellation, subbing in with high octane live mash-ups that gathered favorable comparisons to Ghostland Observatory's breakthrough at ACL 2006.

Elsewhere on the local front, Sahara Smith blossomed right out of the gates Friday morning, as did the twee-meets-Glee minidramas of Speak on Sunday, but the weekend's MVP award belonged to Ruby Jane. The 15-year-old hurricane sat in with Blues Traveler on Friday ("Mulling It Over") and Saturday's breakout Local Natives ("Who Knows Who Cares"), then bowled over the BMI stage on Sunday with the fiery Western swing and Americana boogie from her new EP, Feels Like Home, following an introduction by her trailer park neighbor and original Love Connection host Chuck Woolery. The Sword's thunderous homecoming celebration, which began at ACL on Friday, was dampened by the sudden departure of the band's drummer and original manager Trivett Wingo on Monday, leading to the cancellation of a European tour. "I literally reached a point where I was physically and mentally unable to continue," related Wingo, who plans to pursue a degree in accounting. "I had been medicating myself to be on tour, and I realized that psychiatric help wasn't the answer."

Those Darlins (Photo by Austin Powell)

Personal highlights included the bawdy Those Darlins, a trio of Muswell hillbillies with smeared mascara and torn leggings, shotgun-marrying cowpunk and blues in instant classics with lyrics like, "You give me hives." Indie rock's barefoot oracle John Darnielle of the Mountain Goats caused a similar reaction from the main stage, issuing ecstatic tales of West Texas and biblical wrath ("Psalms 40:2") that reigned triumphant in the inspirational "This Year." Gaslight Anthem proved to be Jersey's new working-class heroes on Saturday, churning out modern E Street shuffles with assembly line proficiency, not unlike The Brutalist Bricks of Ted Leo & the Pharmacists, who were joined by Austin's Sally Crewe for "Bottled in Cork" in a much needed wake-up call after the linear seduction of Warpaint Sunday morning. In what will hopefully become an annual tradition alongside Asleep at the Wheel and the Jones Family Singers, Dallas' dapper Relatives worked miracles on par with Smokey Robinson's South by Southwest revue in the stunning "What's Wrong With America" and gospel-funk godsend "Don't Let Me Fall."

The most memorable moments of the week for OTR actually took place in the studio where it all began. Last Wednesday for Austin City Limits, Will Johnson was officially proclaimed the fifth member of Monsters of Folk. Jim James heralded, "Texas' own treasure, so great, so monstrous."

"We went to Toy Joy today. I could spend an entire life there and it wouldn't be enough time." – Monster of Folk Jim James at the supergroup's Austin City Limits taping last Wednesday

"We're staying in South Austin. There's, like, a hula-hoop festival going on. It's got us really demented." – Sonic Youth's Thurston Moore, Thursday on Austin City Limits

"Thank you, Eagles fans, for not throwing shit at us." – Ted Leo

"I can't see shit, 'cause like an asshole I wear sunglasses at night." – Julian Casablancas, the Strokes

"How do you like our light show, the one green light? You just have to guess the symbolism, the meaning." – James Mercer, Broken Bells

"Dude who is yelling, 'Going to Georgia,' I have heard your cry." – John Darnielle, the Mountain Goats

"Sometimes we do crumble under the emotional weight of our own music." – Matt Berninger at the National's Austin City Limits taping Monday

After ACL weekend, OTR can't realistically afford to visit the semiannual Austin Record Convention this weekend at the North Austin Event Center (10601 N. Lamar), but organizer Doug Hanners insists it's a buyer's market. "We're not really worried about the economy," he says. "After 30-plus years, we've seen about everything, but one thing remains constant: Collectors can't be stopped!" The big draw this go-around is an equipment liquidation featuring 50 years of audio components from amps to tape decks, priced to move. Early bird shoppers ($25) get first dibs on Friday, 10am.