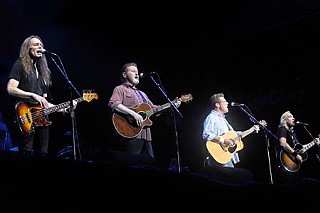 
With their collective age approaching 250, the four horsemen of the classic-rock apocalypse rode into Zilker Park with a take-no-prisoners attitude. Mssrs. Schmit, Frey, Walsh, and Texas' own Don Henley don't care if you, like Lebowski, hate the Eagles, man. They're still doing their thing, and like the Stones, ZZ Top, and numerous pros still making the rounds, the Eagles obviously like playing together again – for now, at least. That much was apparent from the get-go when a crowd of 40,000 strong turned their ears to the east end of Zilker Park to hear the Steve Young-penned "Seven Bridges Road," which has been a live staple for the band since they first tracked it in 1980, the year following the release of The Long Run. The band wasn't shy about its age either, with a downright vaudevillian Glenn Frey grasping his back after kneeling for a guitar solo. "Back in 1975, we did everything fast," he quipped at one point to knowing chuckles. "It used to take us two days to write a song," Frey continued, "now it takes us two years." The Eagles concentrated on the classics, but they weren't intent to merely re-create the experience of jamming their bestselling Greatest Hits collections on your rec-room boombox. After warming up the crowd with "Peaceful, Easy Feeling" and bassist Timothy B. Schmit doing his best impression of long-lost brother Gibb on "I Can't Tell You Why," the group made a bid for contemporary relevance by projecting footage of soldiers in the sands to accompany the title track of 2007's Long Road out of Eden. Dipping into the solo catalogs, the boys in the band played 1982 Henley track "Dirty Laundry" alongside footage of Tiger Woods, Fox News, Glenn Beck, Bill O'Reilly, Jon Stewart, and others. They also tackled Henley's "Boys of Summer," but it was Joe Walsh – his voice thin but with his guitar face intact – who brought the biggest cheers with "Life's Been Good." ("They send me e-mail, say that Glenn's great," goes a revised line in the 1978 radio staple.) The Eagles may not have anything left to prove, but as they closed a careworn and captivating set ("Life in the Fast Lane," "Heartache Tonight," "Take It Easy," and finally Frey's "Desperado"), it seemed that with a little Rick Rubin-type retooling, they at long last might outrun irony, regain heavyweight legitimacy, and stop suffering punch lines. 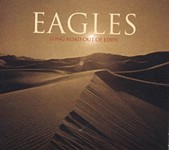