American Slang (Side One Dummy) 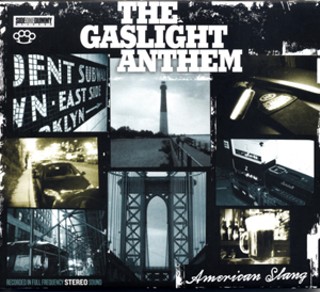 American Slang (Side One Dummy)


One man's sincerity is another man's Springsteen. Gaslight Anthem frontman Brian Fallon's guest grand slam on the Jersey godfather's recent London Calling: Live in Hyde Park DVD for "No Surrender" bridged two generations of Garden State homeboys with their hearts on their Fenders. Like Green Day's Billie Joe Armstrong, Fallon leads a wife-beater-tight punk outfit with a voice at the crossroads of adolescence, too young for cynicism, too old for idealism, just right for possibility. American Idiot and Born in the U.S.A. both pave the way for American Slang, and as the quartet's third album, it's Gaslight Anthem's Born To Run. "And here's where we died that time last year," sings Fallon on the opening title cut, already racing anthemic since before you cued up the song. The succeeding "Stay Lucky" sounds mic'd from the warehouse floor, but its greyhound tempo forgives all. And when backbeats slow to the finger snaps of "The Diamond Church Street Choir," which is soon thawing a punky "Tenth Avenue Freeze-Out," American Slang settles in. The Clash's "Straight to Hell" skitters liltingly on "The Queen of Lower Chelsea" next, though steely electric shocks deep inside "Orphans," a slamming mosh, jolt both back to p-u-n-k. The hopscotch rope bounce of "Boxer" is another knock-out, and "Old Haunts" lights a sparkler straight out of (don't laugh) the Hooters' "And We Danced." A radio hook is a radio hook is a radio tattoo. "We Did It When We Were Young" closes at the LP's epic length of 4:16, 10 songs as close-knit as Irish twins. (2:30pm, Budweiser stage)