The Shape of What's to Come

Even before breaking ground, the new Austin City Limits Live at the Moody Theater had been certified as an official Rock & Roll Hall of Fame landmark. Ninety percent completed, the new $30 million facility in the Block 21 complex proved Monday during a tour that the venue won't have much trouble living up to the title upon opening in February 2011, with faultless sight lines, an open patio area, and a huge load-in facility – a rarity for Downtown. The three-story facility boasts roughly the same floor space as the original ACL studio but extends vertically in a way that ensures the furthest seat is only 75 feet from the stage. "An arena standard in a theatre space," surmised Sharilyn Mayhugh, the new director of marketing. "And keep in mind that it's designed to be a recording studio," added General Manager Tim Neece, formerly of Texas Performing Arts. When not in use by ACL, the Moody Theater, which recently tapped former Live Nation Vice President Colleen Fischer as the director of booking, will serve as a full-time venue, ideally hosting up to 100 events a year, a move that could drastically alter the local booking paradigm (discussed in detail in "Big Dogs, Young Rebels, and Aging Giants," News, p.28). Unfortunately, the establishment of a liquor license for the facility also means the end of the free beer at ACL tapings. Neece counters, "At least the bathrooms will be on the same floor." 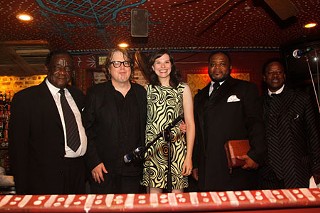 Courtesy of Joseph A. Rosen

• Antone's Records co-owners Eve Monsees and Mike Buck were married last month at the Ponderosa Stomp in New Orleans by the Revs. Gean, Cedric, and Tommy West, better known as the Relatives (see above). There's no official word on special guests for the Dallas gospel-funk outfit's two-night stand at the Continental Club, Friday-Saturday, but the Relatives did cut a fiery track ("You Been Lyin'") with Black Joe Lewis for his band's new Lost Highway album, due this spring.

• A few months back, before guesting with Bob Dylan at the Backyard, locally based Crescent City scion Ivan Neville sat in on keyboards for the entirety of the Austin City Limits taping of fusion funketeer Trombone Shorty, proclaiming, "The future of New Orleans is in good hands."

• The sacred steel of Robert Randolph & the Family Band christens Rock Island at Zilker Park tonight, Thursday, 8pm, in a benefit for the re-election campaign of Texas Sen. Kirk Watson.

• Austin's the Band of Heathens is giving away a free download of its sterling cover of the Flying Burrito Brothers' "Sin City," recorded during the sessions for One Foot in the Ether. www.bandofheathens.com

• Following a co-write with Okkervil River's Will Sheff on last year's The Fall, Dallas-bred jazz chanteuse Norah Jones duets with Willie Nelson on "Baby It's Cold Outside" for her forthcoming album of collaborations, ... Featuring.

• Aaron Dessner of the National sounds off Dark Was the Night, the charity compilation he curated for the Red Hot Organization, at austinchronicle.com/earache.

Survival of the Fittest

The Weather Channel forecasts a near-perfect weekend at Zilker Park for the 2010 Austin City Limits Music Festival, with clear skies and high temperatures in the upper 80s. Having been grossly unprepared for the dust bowls and mudslides of years past, however, OTR's not taking any chances. To help round out the now-obvious essentials – sunblock, rain boots, Dr. Scholl's insoles, Emergen-C – a few industry colleagues shared items from their personal survival kits.

• "Goodies can be anything small that makes you happy. From Sour Patch Kids to not-as-legal variations, they're small, so they can fit in your pockets." – Matt Allen, the Ice Cream Man

• "NeilMed saline solution. Because of the crazy fall pollens that are in the air, I think it is essential to do a saline rinse to keep the allergies at bay during the three days." – Carolyn Schwarz, executive director for Health Alliance for Austin Musicians

• "Backstage pass. Get one; you'll be stoked on the free coconut water when the three hits of LSD kick in. We can't wait! Last couple of nights on the West Coast have been amazing!" – Bryan Richie, the Sword

• Emo's owner Frank Hendrix has secured a long-term lease on Riverside's storied metal sanctuary, the Back Room (see "Welcome to the Jungle," July 28, 2006), with plans for a complete renovation and a soft opening for South by Southwest 2011. "It's something totally different, a state-of-the-art facility," teases Hendrix. Check back next week for a full breakdown.

• "My kids just flipped out," recalls Mike Dickinson, owner of Austin's Chicken Ranch Records, about screening a promo DVD of Peelander-Z for his two toddlers. That reaction ultimately led to his asking the Japanese action-punk heroes to create a children's album for his label. The resulting P-TV-Z, completed locally with co-producer Bryan Nelson in a mere nine days, is a perfectly animated sugar high that features former tourmates the Octopus Project and Riverboat Gamblers, as well as members of Foot Patrol, Black Panda, and even Atash violinist Roberto Riggio. "I think every musician's child in Austin is on this record too," Dickinson laughs. Peelander-Z crashes End of an Ear today (Thursday), 6pm, and circles back next month for Fun Fun Fun Fest.

• On Tuesday afternoon the superpowers of Austin music – Charles Attal of C3 Presents, Waterloo owner John Kunz, South by Southwest's Roland Swenson, and about 20 of their closest friends – announced the formation of Austin Music People. The new nonprofit, headed by Momo's owner Paul Oveisi, essentially tackles the idea of a music department from the private sector, creating an organizational body to voice concerns and lobby at the state and local levels. Learn more and get involved at www.austinmusicpeople.org.

• In what organizer/booker Timmy Hefner hopes will become an annual tradition, J Church offshoots Shanghai River and the Altars are paying tribute to local punk stalwart Lance Hahn, who passed in October 2007, on Saturday at Red 7. The show, which benefits Hahn's longtime partner Liberty Lidz, boasts a rock-solid lineup featuring Ted Leo & the Pharmacists, L.A.'s Zola Jesus, and locals How I Quit Crack and Wild America.