Austin Eats Is Now Bigger and Better Than Ever!

If these choices aren't enough for you, we don't know what is

Festivalgoer Graham Carter gets ready to dig into a shrimp remoulade sandwich from Aquarelle. (Photo by Claudia Alarcon)

This year, festivalgoers will be happy to see a large number of newcomers to the Austin Eats Food Court – from longtime Austin favorites to award-winning fine-dining establishments and plenty in between – with more wraps, tacos, and burritos than you can shake a stick at, plus lots of refreshment in the form of natural sodas, teas, sno-cones, and all-natural aguas frescas and smoothies to keep you cool and hydrated for the long weekend haul.

Another new and exciting development: HOPE Market will have its very own 10-foot-by-60-foot booth, located between Austin Eats and H-E-B Zilker Beach, selling items from most of the Sunday market's vendors. Stop by for a taste of local, sustainable, and 100% artisanal Austin, and support our local food production movement.

Bess Bistro makes its Austin Eats debut with some of its most popular menu items: semolina-crusted artichoke hearts tossed with grated Parmesan and a roasted garlic aioli for dipping; beer-battered and lightly fried cod, served with house-made potato chips and a Cajun remoulade; and beer-battered cod with cabbage and Cajun remoulade or grilled flat-iron steak with a blue cheese aioli, both served on potato buns.

These folks claim to make the "world's best damn burrito," which they describe as "a little Tex, a little Mex and a heaping of freshness stuffed into tortillas, custom prepared to suit your exact tastes." All nonmeat ingredients, including the rice and beans, are vegetarian- and vegan-friendly. Be sure to try the Pot Brownie, baked in a "pot" and topped with fudge and chocolate-chip morsels.

Galaxy Cafe will feature $5 grilled-chicken chi­pot­le wraps and steamed-veggie chipotle wraps, with bags of chips for $1. "Our focus will be on making a quality product and maintaining short lines," says booth manager Shay Jones. "We promise both!"

Another longtime Austin favorite, chef/owner David Garrido enters the ACL arena for the first time with this offshoot of his eponymous Downtown restaurant. He'll be serving three delicious options of goodness rolled in flour tortillas: a beef morita burrito filled with picadillo, a turkey chipotle BLT, and an avocado serrano wrap.

Executive Chef Marty Frannea is excited to be included at ACL. Hyde Park's No. 1 menu item is a no-brainer: big orders of the insanely popular french fries for $7. Also look for a couple of light sandwiches – pimento cheese and cucumber and pecan chicken salad – both served on whole wheat hoagie buns. Add a side of fries for $2 more.

The new endeavor from the Daily Juice's Matt Shook, Juicebox is a purveyor of all-natural refreshment made from fresh, organic ingredients right here in South ATX: fresh black-cherry limeade, a cucumber-mint agua fresca, pure coconut water, and an açaí smoothie, all for $4 or $5.

Hard to believe this is its first ACL, but Kerbey intends to start with a bang, offering Pedersen's Natural Farms sausage or house-made veggie soysage dipped in Kerbey's famous buttermilk pancake batter, then fried and served on a stick ("like a corn dog, but way better"). The booth will also serve the much-loved tomato pie, plus chips and queso, of course!

Benjamin Nathan is no stranger to the ACL food court, but this is his first year as a business owner, having recently partnered with Matt Luckie at the revamped Lavaca St. Grill. Nathan is serving the Hatch green chile cheese tater tots from the grill's retro comfort food menu, plus Frito pie "in the bag" and Philly cheesesteaks and chicken subs.

The champion of local pizzerias makes its ACL debut Mangiazilla-style, with XXX-large slices – really a quarter-pizza – topped with cheese or pepperoni. Also available is one of Mangia's new menu items, a rib-eye cheesesteak sandwich loaded with grilled peppers, onions, and mushrooms and served on a 7-inch roll.

Chef and owner James Holmes is no stranger to feeding the large ACL crowds, having helped at Austin's Best Burger in the past. For those who've never tried Olivia's fried chicken, you are in for a treat. Get a bucket of chicken for four or a single order, plus bacon-wrapped, cheese-stuffed jalapeños in a Lone Star Beer honey glaze, or baked potatoes topped with okra Creole.

Now, this is something to write home about. Acclaimed Fort Worth chef Tim Love comes down to the ATX with his upscale cowboy cuisine in two different side-by-side operations. Love Shack will feature the signature Love burger with special Love sauce, chile Parmesan chips, and Kick Ass Nachos. Next door, the high-end Lonesome Dove will serve wild mushroom and beef tenderloin skewers, grilled prime tenderloin topped with a yuzu citrus aioli, and sides of white truffled mac and cheese. I may go to ACL just to eat here.

Chef Luke Bibby and his crew are back with Austin's Best Burger, a Food Court icon serving backyard-style burgers and veggie burgers (on fresh kaiser rolls with Love Sauce), cheese fries, and ice-cold watermelon slices. Be prepared for some of the longest lines at the festival, but once you get to the front of the line and bite into that juicy burger or watermelon slice, it'll all be worth it.

Austin's own pizza emporium is now a perennial ACL fixture with its portable 7-inch personal pizzas, available in cheese or pepperoni. If you need to feed picky kids, this is a perfect choice for you.

It wouldn't be ACL – or any festival worth going to, for that matter – without Austin's beloved purveyor of grilled sausage sandwiches. Pick your choice of locally made, freshly grilled sausages – smoked Italian, all-beef country sausage, and bratwurst – and they'll serve it to you on a roll with fresh grilled onions and hot sauerkraut, dressed with homemade brown mustard and/or curry ketchup. Best Wurst will also be serving my favorite treat, New York buttered salt potatoes, boiled in mild salt brine and served whole with melted butter, chopped green onions, and a sprinkling of spicy seasoning.

These savory Australian-style pies have been an ACL staple for the last five years: the ever-popular steak and potato with Guinness gravy pie, the Southwest grilled chicken breast mixed with Boomerang's signature Adobe Sauce pie, and a veggie-/vegan-friendly offering, the Thai veggie pie.

ACL gave birth to the hot and crunchy cone, Hudson's on the Bend's take on street food, which in turn launched its own food truck phenomenon: The Mighty Cone. For the uninitiated, these handheld meals consist of a rolled-up flour tortilla stuffed in a paper cone, filled with a cabbage, mango, and jalapeño slaw on the bottom, and topped with your choice of chicken, shrimp, and/or avocado. Yes, they are as good as they sound. And since Hudson's is well-known as Austin's mecca for game dishes, the menu also features a venison sausage wrap, plus the restaurant's signature Death by Chocolate brownie.

Austin's favorite burger stand returns with its signature single- or double-patty hamburgers, cheeseburgers, and the best veggie burger in the whole city. As always, the hamburgers are made from all-natural beef that's 100% hormone- and antibiotic-free and 100% vegetarian-fed.

The homegrown wing chain will put a smile on our faces with the same menu from last year: jumbo chicken wings in three different flavors, chicken tenders, fried pickles, and the infamous fried Twinkies. "The only difference is that we'll be hoping there is no rain!" says founder Dave Paul.

The taco icon returns for the second year in a row by popular demand. It'll offer its ever-so-popular green-chile pork carnitas tacos, a Crossroads taco with smoked brisket, and a potato, bean, green chile, and cheese taco for the non-meat-eaters.

Wahoo's is back for its third consecutive year with its wildly popular tacos and burritos with all the trimmings. The choices include blackened fish or grilled chicken tacos or burritos and a vegetarian burrito filled with rice, beans, and a mix of fresh veggies. There also will be a bean-and-cheese burrito that would make a great option for the kiddos. 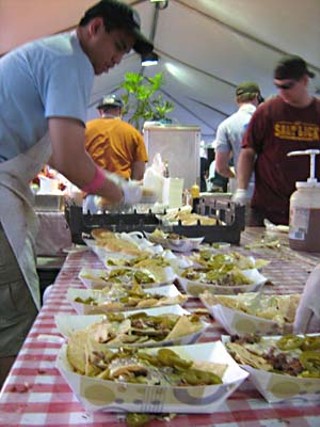 The Salt Lick crew prepares piles of sloppy nachos in advance of the lunch rush. (Photo by Claudia Alarcon)

The Salt Lick's hard-working staff is used to the long lines of faithful local and visiting carnivores who wait patiently to get their fix of world-famous Hill Country barbecue staples. The usual chopped-beef sandwiches and sausage wraps will be joined by baskets of ribs with slaw, as well as the joint's own ACL signature: sloppy chopped-beef nachos with jalapeños and queso for those who like it hot.

The legendary purveyor of live music will serve the same successful menu from last year's festival: barbecue sandwiches served on a bun, filled with pulled pork shoulder; slow-smoked, sliced brisket; or chopped beef with barbecue sauce. Last year's hit, the jalapeño-marinated brisket taco served in a flour tortilla with fiery green sauce, is also back! All items come with a side of Fritos. Add a house pork/beef blend sausage wrap to any item for $3.

The Best Lemonade folks spend countless hours hand-squeezing case after case of fresh lemons and limes to keep up with the demand for their refreshing beverages. Regular and strawberry lemonade and limeade are back to keep the crowds refreshed with a dose of energy-boosting vitamin C.

Austin's favorite homegrown ice cream scoopers will dish out favorite flavors Mexican vanilla, Belgian chocolate, Oreo, and Zilker Mint Chip (small, $3; large, $4) with optional toppings ($1) of fruit, candy, or nuts. They can also make shakes and floats out of any of the flavors with Coke, root beer, Dr Pepper, or orange, grape, or strawberry soda for $5.

Children of the Kettle Corn 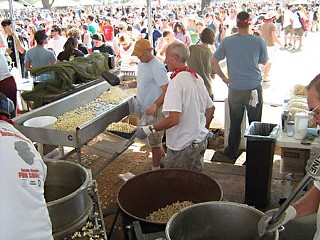 Children of the Kettle Corn keep the kettles cooking and the corn popping all day long. (Photo by Claudia Alarcon)

One of the highest demand snack options at ACL, this booth serves what is widely regarded as the best freshly made organic kettle corn in Austin. This is the healthiest option for an in-between-bands bite to grab and go, any time of day.

Snowies, with a résumé that includes just about every major local event, is back with all-natural flavored sno-cones, and now, beignets! 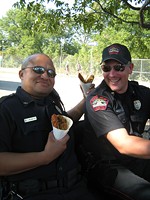 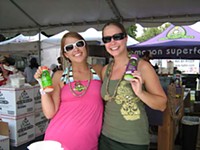