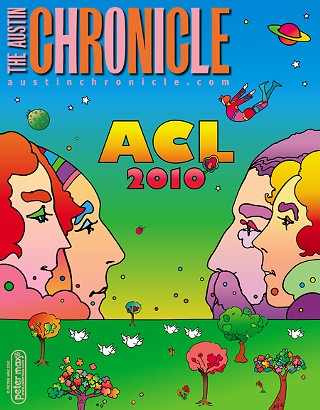 The iconic artist will be showing his work in town on Saturday, Oct. 9, and Sunday, Oct. 10. For more information, go to www.russell-collection.com. (Cover by Peter Max)

Think of Shearwater's sixth album, The Golden Archipelago, as leader Jonathan Meiburg's final dissertation. Based on his studies of the striated caracara and "community life at the ends of the Earth," the LP's a scholarly and stylistic work of rare beauty that opens with the national anthem of Bikini Atoll and serves as the closing chapter to the local band's triptych that began with 2006's Palo Santo. – Austin Powell

A breakout act from South by Southwest 2010, Warpaint has its L.A. look down but sounds more in line with German space rock from the early 1970s. The female quartet's 2009 debut EP, Exquisite Corpse, is a slinky seduction, with hypnotic post-rock rhythms and dreamy vocal harmonies, mixed by John Frusciante, formerly of the Red Hot Chili Peppers. The band's first LP for Rough Trade, The Fool, drops later this month. – Austin Powell

NYC's White Rabbits succeeds primarily through association. The band carries the same Esquire appeal of former tourmates the Walkmen but owes an even greater debt to Spoon. Britt Daniel produced the sextet's second album, last year's It's Frightening, bringing all the familiar hallmarks – faux-studio chatter, cocksure swagger – as if following A Series of Sneaks to a different conclusion. – Austin Powell

The name alone suggests volumes, which is what this young Austin quartet is likely to be releasing over the next few years. On the strength of a five-song EP bursting with bright, funky dance-pop, Speak stole the 2009-10 Austin Music Awards as Best New Austin Band. They'll be backing that up with a full-length later this year. Catch 'em while they're still local. – Margaret Moser

Portland, Ore.'s Blind Pilot mastered the art of folk-pop: mellow yet hooky, uplifting but torqued with nostalgia and yearning. After 2008's promising debut, 3 Rounds and a Sound (Expunged Records), the band expanded from a duo to a sextet, lacing in banjo, trumpet, and vibraphone. – Doug Freeman

Billy Bragg doesn't look over his shoulder, but if he did, Frank Turner would be all up in his grill. The 28-year-old folk-punk was Eton-educated alongside Prince William, helped pioneer UK hardcores Million Dead, and last fall reeled off his third LP of musical socialism, Poetry of the Deed, on punk imprint Epitaph. – Raoul Hernandez

After raising the freak-folk flag to inspire the short-lived "New Weird America" movement, Devendra Banhart shed his flowing locks but only mildly curbed his eccentricity. Last year's What Will We Be (Warner Bros.) may be the smoothest of the troubadour's warbles, however lasciviously cracked the video for "Foolin'" came out. – Doug Freeman

Wasilla, Alaska's other export is certainly more palatable. This quartet's latest, American Ghetto, improves upon the swirly pop of its previous albums and jumps from tree to tree, keeping the listener guessing. – Audra Schroeder

If Dawes rustles an echo of Laurel Canyon, they do so with a decidedly contemporary ear. Fine-tuning 1970s country rock against My Morning Jacket's epic balladry, the L.A.-based quartet's 2009 debut, North Hills (ATO), balances rich harmonies with loping Americana jams, the latter serving as the foundation for their popular live shows. – Doug Freeman

Dallas' premier gospel family was rediscovered last year, as if by divine intervention. In 2009, local soul label Heavy Light Records released Don't Let Me Fall, a collection of the Relatives genre-defying church music, and one night at the Continental Club last fall – their first live performance in 35 years – shook the walls. – Audra Schroeder

Yeasayer's "Ambling Alp," from this year's excellent sophomore LP, Odd Blood (Secretly Canadian), is destined to be one of 2010's best singles, an anthemic, electro-warped pick-me-up for Animal Collective refugees. The tune only hints at the Brooklyn band's live show, which explodes with dense contortions of genre and sound and resulted in two sold-out shows at La Zona Rosa in April. – Doug Freeman

If Midlake's 2006 breakout, The Trials of Van Occupanther, charmed like a laid-back Fleetwood Mac, the Denton quintet must have figured digging even deeper into the past would produce more magic. This year's third offering, The Courage of Others (Bella Union), weaves intricate folk ballads, accented by Tim Smith's rustic vocals, dreamy and doomed in the same breath. – Doug Freeman

Led by the charismatic Tim Crane, this local ninepiece brings the party wherever it goes. A Westside soul revue echoing the sweat and tears of Memphis R&B, the Austin flock keeps the vibe retro and has taken to releasing a series of 7-inch singles on a monthly basis. – Jim Caligiuri

With apologies to Messrs. Henley, Frey, and Schmit, my three reasons to stay for the Eagles: 1) Joe Walsh's "Life in the Fast Lane," co-written by Henley and Frey on 1976's Hotel California; 2) the Walsh-written and sung "In the City," from initial Eagles swan song, The Long Run; and 3) guitarist Walsh's seven-minute, sun-drenched metronome "Last Good Time in Town," off the first new Eagles studio album in an ice age, 2007's Long Road Out of Eden. – Raoul Hernandez