Playing to kids – you can't beat it! 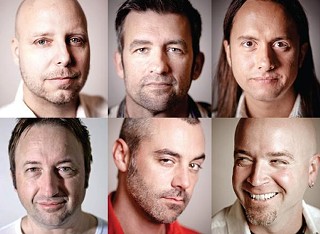 
Twenty years ago, playing a festival like ACL would have meant the moon to the Verve Pipe, a chance to connect with their peer audience. Today, playing ACL means playing to ... children. The Michigan-based sextet went gold with "The Freshmen" in 1997, sending the Verve Pipe hurtling through a space race of labels, tours, and recordings. Today has a whole different pace, and to drummer Donny Brown, that's the whole point.

"These kids are doing things I wish could have at their age," he marvels.

After participating in a compilation album of kids' music, the band found itself drawn to the deceptively simple appearance of making music for a young audience. Brown, who teaches drums and guitar to young and adult students, finds great personal gratification in this.

"In being able to turn them on to Keith Moon, then Gene Krupa," laughs Brown.

Taking a cue from the spasms of agony that the Barney theme caused parents (and nonparents) in the 1990s, the percussionist felt it important to create "music that won't drive your parents crazy listening to it repeatedly.

"We weren't into writing songs with numbers or spelling. We wanted music to respect the modern kid."

To illustrate that, on the Verve Pipe's latest CD, A Family Album, Brown wrote the confessional "We Had To Go Home" about a childhood incident at a neighborhood birthday party that resulted in the title.

"It's fun music we care about," stresses Brown. "We also weren't interested in singing nursery rhymes, though some of those rhymes are the best-written stuff in the world. 'Twinkle, Twinkle, Little Star'? Can you beat that?!"