The evolution of Brooklyn's dark horse of indie rock 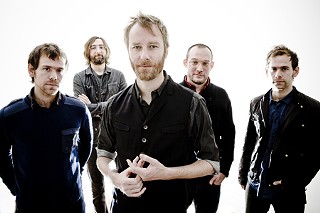 
The National's music lingers in the alcoves of dark, lonely city streets, late night melancholic odes blanketed by the morose comfort of Matt Berninger deeply droned, cryptically imagistic lyricism. As the Brooklyn quintet moves into its second decade, its fifth album, High Violet (4AD), subtly shifts focus by pushing the music more to the fore, highlighting the vivid but restrained arrangements of Aaron Dessner. Working in their newly constructed garage studio behind Dessner's Victorian home in Brooklyn, the band captured unexpected moments as the songs developed, many of which made their way onto the album.

"The way we work is that I'll write a lot of music, and then the band starts to play with it while Matt is off in his own corner working on lyrics and melodies," explains Dessner. "This time there was a longer period where Matt was hidden away with lyrics while we were working on the music really intensely. We were sort of looking at the songs as if they had to keep our attention and evolve and blossom without vocals."

High Violet marks the National's third straight critically acclaimed effort, following in the wake of 2005 breakout Alligator and 2007's Boxer. Most impressive is how the band's matured without losing the core sound of its stoic intensity.

"Those are the kind of bands that we loved, bands that you as a listener could evolve with," says Dessner. "[Today] there really aren't that many that seem to have aspired to make several albums that you can stick with them through.

"Obviously when you listen to [High Violet], it still sounds like the National, and it seems we've walked this fine line of evolving but not changing so much that you can't recognize the band. I think there's something about being a collaborative band in that there's chemistry that works and that it's so much greater than any one person in the band could do."

AMOA's Symposium on Austin Art: How Deep Is Our Love?
The Austin Museum of Art symposium Self Portrait: Austin Art in Local, National, and International Contexts was a positive day of critical dialog and amazingly open-minded community work