It can't be easy being the gypsy king of a theatrical punk musical troupe like Gogol Bordello. Vocalist/bandleader Eugene Hütz estimates the time he spends on the phone doing interviews is "a couple hours a day, maybe every other day."

That's fine by him, because it means Gogol Bordello's mission as proclaimed in the title of its latest album, Trans-Continental Hustle, is gaining momentum. The Rick Rubin-produced disc crossbreeds Hütz's Balkan beats and Eastern European cultural motifs with South American rhythms into a snaky, rhythmic big-band beast that finds strength in numbers onstage. The charismatic Hütz, a native of the Ukraine now living in Rio, balances substance with the spectacle.

"Lyrics are a huge part of my work," he says. "I spend more time writing words and crafting the song more than anything else. People who are tuned in notice that, thank you. And this is the point for Gogol Bordello coming into more recognition, being appreciated for its energy and originality, its songwriting and composition.

"I am not Western European; my perspective is naturally different," Hütz spouts. "I am as big a sucker for cultural anthropology as much as rock & roll. I kept exploring this connection and ended up in Brazil. That's what I love to discover. I am always going in search of those things. In return, that informs my own music.

"A lot of political ideas are romantic. When they end up with the wrong people, that's the problem. They are confused and end up in the hands of people with a bad personal life."

An incurable romantic himself, Hütz stops in midsentence and laughs.

"And they fuck up the rest of the country!" 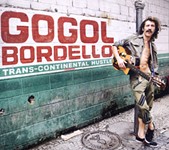