This ain't no place for the weary kind 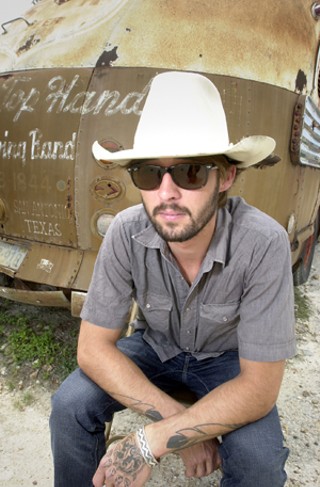 
Ryan Bingham still can't believe he missed giving his acceptance speech for Best Music (Original Song) at the 2010 Academy Awards for his theme to Crazy Heart, "The Weary Kind."

"I was getting a beer," laughs the onetime local songwriter (see "The Cowboy Song," June 5, 2009). "I'd gotten there two hours before it started. They had a list of the categories, but they didn't have the order they were going to be in. Next thing I know, I'm sitting at the bar with my agent, looking up at the TV screen, and T Bone [Burnett] is up at the podium. It was too late. There was no way I could make it up there."

A veteran of the Southwest rodeo circuit with the scars to prove it, Bingham's no stranger to watering holes or making the most of eight seconds of fame. On the boot heels of his acting debut in Crazy Heart and last year's free-wheelin' Roadhouse Sun, the gravel-voiced 29-year-old hooked back up with Burnett for his third album, Junky Star. Like Bruce Springsteen's Nebraska, it bristles with dark, hardscrabble narratives of good characters backed into bad decisions.

"From the beginning, I wanted to get back to it being just a guitar and a song, without a bunch of excess going on," relates Bingham, who recently added the Americana Music Association's Artist of the Year award to his increasingly crowded mantle. "It's mainly people I ran into over the past few years. When you're traveling and playing in bars, late-night, those characters start coming out in back alleyways."