All the Negatives Have Been Destroyed

Austin City Limits' house photographer since 1979, Scott Newton (pictured) has no formal training. He picked up a camera in the mid-1970s to document parties he attended with local songwriter Billy Callery and started selling prints out of a briefcase for $5. "In those days the rents were cheap," remembers Newton, who moved to town the same day the Armadillo World Headquarters opened (Aug. 7, 1970). "You didn't have to sell too many pictures to continue having a great time." After a brief stint in the photojournalism department at the University of Texas, he served as house shutterbug for Castle Creek ("I remember when Townes Van Zandt said, 'Here's a song I wrote today,' and played 'Pancho & Lefty'") and the Opera House. In the process, Newton captured the evolution of the Austin music scene with an iconic portfolio perhaps only rivaled by that of Burton Wilson, and Newton's legacy will soon be permanently displayed in the W Austin hotel with a unique photo of his in each of the 251 rooms. The rest is beautifully detailed in the new Austin City Limits: 35 Years in Photographs (UT Press), a coffeetable book capturing the historic magic that's taken place in Studio 6A (see "Texas Platters"). "I've learned to see, how to tell a story with juxtaposition," Newton surmises. "When I choose to put the box in front of my face and capture it, it flows pretty readily, but I don't have to have the camera with me all the time to be taking pictures." The 61-year-old avid runner estimates he snaps anywhere from 400 to 2,000 shots per episode, with Hayes Carll and Pearl Jam representing opposite ends of that spectrum. He's certainly got his work cut out for him next week with a marathon ACL taping schedule that begins with Monsters of Folk (Wednesday, Oct. 6) and includes Sonic Youth (Thursday), Band of Horses (Saturday), the National (Monday), and the Black Keys (Tuesday). For more information, see www.austincitylimits.org/blog. When MTV's favorite animated couch surfers caught a glimpse of Pavement's "Rattled by the Rush," Butthead simply grunted to Beavis in bored confusion, "They need to try harder." More than a decade after disbanding and nearing the end of an unexpected reunion, not much appears to have changed for the beloved Californian quintet. At a sold-out Stubb's on Tuesday night, Pavement still projected suburban indifference with slacker pop classics like "Spit on a Stranger," "Cut Your Hair," and "Summer Babe," offset by leader Stephen Malkmus' indie guitar heroics on "Frontwards" and "Box Elder." The group got tighter and more engaging as the evening went on, fluctuating largely with the movements of hypeman/percussionist Bob Nastanovich, but after restarting both "Stop Breathin'" and "AT&T" during the second encore, it was strangely refreshing that Pavement still hasn't quite gotten its shit together.

Meanwhile, the Matador nostalgia train keeps rolling this weekend at the Palms Casino Resort in Las Vegas for the label's 21st anniversary bash, which is already being billed as "The Lost Weekend." Recent ATX visitors Guided by Voices and Guitar Wolf will be joined by a reunited Jon Spencer Blues Explosion and Boston's Come, alongside local contributors Spoon, Shearwater, and Harlem, all of whom are on Matador's commemorative 6-CD box set, Matador at 21. Asked how the esteemed indie label ended up at the Palms, locally based label co-owner Gerard Cosloy (see "Slanted & Enchanted," Jan. 22) said, "Another, not nearly as glitzy property bailed on us after long negotiations. They objected to the names of some of our artists. Honestly, I can't see what's so controversial about 'Ted Leo.'" And his go-to Vegas game? www.pinballmuseum.org. 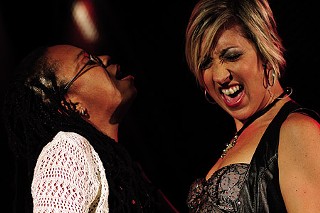 After eight local releases, including the recent Better Than Well – Live at the Saxon (see "Texas Platters," Aug. 6), you might think you know Ginger Leigh. Guess again. In Zach Theatre's new production of Rent, the folk-pop belter transforms into Maureen Johnson, a bisexual performance artist at the center of the Pulitzer Prize-winning bohemian drama. "It's really nice to get out of my own skin and do somebody else's material," says Leigh, who had no previous theatre experience outside of high school. "The challenge was definitely the choreography. I've never been a dancer in an ensemble. The rehearsals were so grueling, and my nerves were really shot about doing speaking lines by myself." On opening night, Sept. 16, Leigh pulled it off with sheer attitude and conviction, and thanks to a cast that includes bandmate John Pointer (Roger), Karma Stewart (Mimi) of Detroit hip-hop outfit PPP, and Porgy & Bess veteran Roderick Sanford (Collins), Rent rocked with an emotional wallop that Green Day's American Idiot blockbuster couldn't possibly touch. "It's such a progressive play," enthuses Leigh. "You can see people in the audience are a little uncomfortable sometimes, but the point needs to be made that love has no color, no gender, and no boundaries." Rent runs through Nov. 28 at Zach Theatre's Kleberg Stage, with a special performance from Leigh's band on set with Sarah Sharp on Oct. 19. www.zachtheatre.org.

In the spirit of its Fall Tour '08 CD-R, White Denim dropped a new album last week, Last Day of Summer, a placeholder for the band's upcoming Mike McCarthy-mixed third LP. The mix is a delightfully schizophrenic listen that boasts a remix of "I'd Have It Just the Way We Were," introduces the permanent addition of Pink Nasty guitarist Austin Jenkins, and is currently available as a free download with optional donation (www.whitedenimmusic.com). "This record is totally real," explains bassist Steve Terebecki ("Mothers of Reinvention," Oct. 23, 2009). "It just doesn't have the same budget." Grab a limited physical copy when the local jazz-funk powerhouse returns to Antone's on Oct. 16.

Austin's losing yet another rock frontman to a dame in Portland, Ore. Matt Drenik is departing in October, but not before reuniting with the Good Looks at Trophy's on Friday and getting one last lick in with Lions at Emo's on Oct. 15. "I'm keeping my place down here," relays Drenik, who'll be focusing on side project Battleme. "I'm guessing we'll do a lot of back-and-forth."

Heavy Light Records, the local funk historians behind the resurrection of the Relatives (see "Don't Let Me Fall"), just unearthed another gem in the form of El Guasano's Fantasia del Barrio, a surrealistic border-town trip created in the wake of a horrific Vietnam tour and billed as the missing link between Chicano soul and Texas psych. The reissue faithfully reproduces the original 1975 instrumental LP – tape hiss and pops included – and boasts terrific liner notes from Chronicle scholar Thomas Fawcett.

In the rock & roll equivalent of Julie & Julia, the Chronicle's classifieds guru Bobby Leath is spinning his entire vinyl collection – alphabetically and one album per night – and posting the results to his new blog. It's a refreshing, personable read that's already garnering hits from Japan and beyond. www.1000daysofvinyl.blogspot.com.