Uncertain times create unlikely alliances. On Monday afternoon, Antone's announced a new partnership with Emo's owner Frank Hendrix that essentially hands over daily operations at the revered blues joint to the Red River anchorman. Recalling Antone's short-lived 2003 merger with Direct Events, the Fifth Street venue will be overseen by Emo's managers Jason Sabala and Bill Corsello, while booker Kevin Hoskins will help round out the calendar. Contrary to what OTR originally reported online, Hendrix will only be a part owner, and the move is meant primarily to ease the burden on Susan Antone, who's managed the venue since the May 2006 passing of her brother, local blues godfather Clifford Antone.

"I'm going to have some time to breathe ... maybe," laughs Antone, who will continue with her normal booking and publicity duties but plans on devoting more time to her charitable work with American YouthWorks and finishing her photo archive for the Dolph Briscoe Center for American History at the University of Texas. "We've done a lot of different things with a lot of great people at Antone's. We're just really grateful that we're still around and moving forward."

"Antone's is always going to be Clifford's house of the blues," promises Hendrix, who acquired Emo's in 2000. "None of that is going to change. We're going to do a little more of that Austin homegrown country and indie rock, just to inject a little more life in it. Every now and then you need to stir the chili."

Hendrix shies away from the specifics of the arrangement. "It's kind of a work in progress," he says. "We just agreed that this is what we need to do, and we're going to see where the ball takes us. That's vague isn't it?"

The timing for the arrangement couldn't be better. Despite a drastic upswing in metal shows, Hendrix told the Chronicle in May that Emo's was coming off its worst year ever, and Antone's, which recently celebrated its 35th anniversary, has a capacity that splits the difference between Emo's indoor and outside stages, 300 and 1,000, respectively. And what's punk rock if not a variation on the blues?

"As long as the music's good and soulful and has its own rhythm, then it's going to work out just great," agrees Antone. "I know my brother would've liked Frank."

The Wolfgang's Vault of the Digital Age, Daytrotter.com has become a household name by recording indie bands straight to tape – one take, no overdubs – and releasing those exclusive sessions as free downloads. Since 2007, the Rock Island, Ill.-based website has camped out at Austin's Big Orange studio for South by Southwest, and based on the success of those weeklong marathons, the two entities entered into a full-time, long-distance relationship earlier this month. "We're really just facing the fact that no matter how respected or big Daytrotter gets, there's no way some bands are going to come to Rock Island," says Sean Moeller, who co-founded the site in March 2006 with engineer Patrick Stolley. "It certainly doesn't hurt that it's a five-minute walk from Emo's." The Austin branch will be managed by studio owner Matt Oliver of TV Torso and his assistant engineer, T Bird & the Breaks' Sam Patlove. The two have already captured new sessions with Happy Birthday, Ty Segall, Residual Echoes, and White Mystery. More importantly, given the site's 100,000 monthly unique visitors, Daytrotter has the ability to shine a national spotlight on deserving local talent. "That's what it's all about," enthuses Moeller, "sharing that momentum and traffic to help younger bands."

Ten Austin Classics From the Vaults

Aimee Bobruk would like to welcome you to "The Wonder Chamber," her new song subscription service in collaboration with New York's ArtistShare for Songwriters. For $25 quarterly, fans receive a new song every three months, as well as a digital window into the local songwriter's creative process, with weekly updates, demo versions, and, in the case of the first installment, studio footage with producer and Okkervil River collaborator Brian Beattie. By this time next year, Bobruk hopes to have completed a follow-up to the elegant pop suites of 2008's The Safety Match Journal. "The next wave is about breaking the boundaries between what happens onstage and what goes on off-stage," says Bobruk, whose free happy-hour residency at the Continental Club wraps up next Wednesday, Aug. 25.

Luck of the Draw

La Lotteria is essentially a randomized battle of the bands, with low expectations and maximum volume. At least one supergroup emerged from the second annual musical grab bag on Saturday at Red 7: RaquasoXXX. In less than 24 hours, the group – singer Zach Hall of Queen tribute act Magnifico, former Riverboat Gamblers drummer Eric Green, guitarist Adrian Muñoz, and bassist Mark Fagan – achieved what takes most bands months: writing a 20-minute set and notching two self-proclaimed hits, "Dick Thief" and "Don't Tease the Wizard." "I don't mean to pat myself on the back, but it was like catching lightning in a bottle," boasts Fagan, the Chronicle's Sports editor. Read his full account at austinchronicle.com/earache.

San Antonio's dark wizard of the accordion, Esteban "Steve" Jordan died last Friday from complications of liver cancer. A stone-cold trailblazer known as "El Parche" for his ubiquitous eye patch, Jordan, 71, accomplished the otherwise unimaginable, incorporating the squeezebox into the psychedelic era of the late 1960s. He never looked back (see "Chac-Mool," Aug. 8, 2008). "What Steve did with his accordions was shave the reeds down to equal length to give it a powerful single-note sound," explains local Chicano soul contemporary Larry Lange, who organized a tribute to Jordan at the H&H Ballroom in August 2008. "I'm sure that contributed to his distinctive sound, but the genius in his playing was pushing the envelope in regard to what is expected of the accordion."

In lieu of a pennant race, the Round Rock Express is hosting an alternative October blowout at Dell Diamond. Dubbed "Live in the Ballpark," the two-day festival, Oct. 22-23, features Five for Fighting, Collective Soul, Tonic, the Gin Blossoms, and Green River Ordinance, along with celebrity cuisine, player appearances, and a VIP charity event benefiting City of Hope.

Alejandro Escovedo dropped "Anchor" on The Tonight Show With Jay Leno Friday, a mere two days after Austin's Girl of the Century Rosie Flores joined Los Lobos on the program for "Burn It Down" from the Grammy winners' latest, Tin Can Trust. (See Chronicle Music blog "Record Spinning," Aug. 11.) "I've known Los Lobos for years," relays Flores via e-mail. "We all started in the same scene in L.A. back in the early 80s. We had fun reminiscing of yester-years' L.A. punk scene."

After winning a Houston competition last weekend, judged by Bun B and Rhymefest, among others, Austin's Phranchyze ships out to Detroit for the finals of Eminem's Red Bull EmSee: The Road to 8 Mile battle royal on Aug. 26. The winner takes home studio time with an A-list producer.

The entirety of Butch Hancock's heroic 97-song, five night No Two More Alike marathon at the Cactus Cafe was taped for a possible future release. Meanwhile, KUT's search for a new venue manager has been narrowed to five finalists, including Hole in the Wall ace Paul Minor, Cameron Smith of Texas Performing Arts, and longtime Cactus booker Griff Luneburg, who handed out free show posters after Hancock's Saturday night swan song. "It's the end of the iconic years," he smiled. 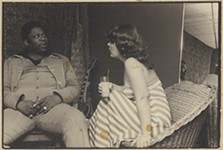 Susan Antone
“If I could do in my lifetime half of what she’s done, I’d be a happy person”