Planes, trains, and automobiles from Cleveland to Chicago 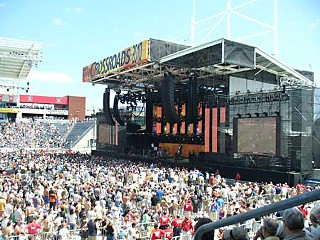 "I went down to the crossroads, fell down on my knees."

Cleveland and Harvey Pekar are one and the same: head down but unbowed.

Or so grumbled its native son and American Splendor incarnate, last Tuesday evening in Cleveland Heights. A hillbilly wedding in the birdsong mountains of West Virginia had flown us into Pittsburgh, and first a 200-mile-plus round-trip in a Dollar Rent a Car to and from said hog roast, then a daylong Greyhound bus odyssey through Ohio had deposited us via taxi at the brownstone doorstep of actor Paul Giamatti's greatest inspiration. Pekar views Cleveland as a 20th century echo, but the pencil-point gleam in his eyes mirrors the city's municipal renaissance. The Rock and Roll Hall of Fame and Museum had called to us on the way to Eric Clapton's Crossroads Guitar Festival, just outside of Chicago.

I went down to the crossroads, fell down on my knees.

I went down to the crossroads, fell down on my knees.

Asked the Lord above for mercy, "Save me if you please." 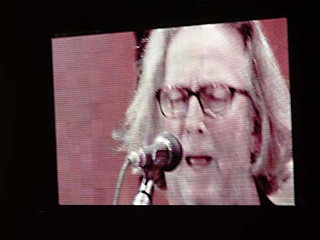 Thumbing through old vinyl with Pekar at Record Revolution, two doors down from Tommy's mountain of hummus – which the jazz scholar ("What about this Sun Ra DVD?") had suggested and then washed down with a black-cherry milkshake – Agnes and I were running on empty. Goodbye, Melvins shakedown tonight at the Grog Shop just around the corner. Thirty-eight hours in the musical spawning ground of Screamin' Jay Hawkins, Pere Ubu, Tiny Bradshaw, Nine Inch Nails, Henry Mancini, and Bone Thugs-n-Harmony didn't yield baseball favors from the away-game Cleveland Indians either.

I went down to the crossroads, tried to flag a ride.

I went down to the crossroads, tried to flag a ride.

Nobody seemed to know me, everybody passed me by.

According to the historical marker outside the Rock and Roll Hall of Fame, which hangs out over Lake Erie, Pennsylvania-born deejay Alan Freed coined the term that now brands the giant glass pyramid late in Harry Truman's second term. Directly thereafter, "The Freed-sponsored 1952 Moondog Coronation Ball in Cleveland is believed to be the nation's first rock and roll concert." Inside, a prominent wall notes that Akron, Ohio, sprouted Devo and spit Chrissie Hynde, while Youngstown birthed Dave Grohl and Robert "Kool" Bell. Halved by the Cuyahoga River, Cleveland hums – faintly – Georgia's R.E.M., which soundtracked Lifes Rich Pageant with Michael Stipe howling "Cuyahoga."

I'm going down to Rosedale, take my rider by my side.

I'm going down to Rosedale, take my rider by my side.

You can still barrelhouse, baby, on the riverside. 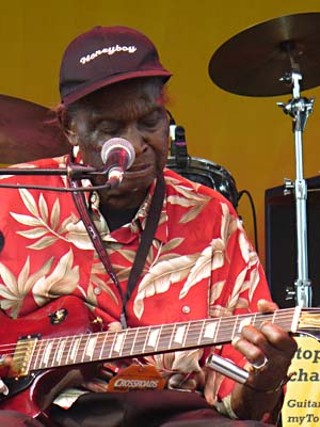 Should rock & roll be enshrined? They did it to Austin City Limits.

And I'm standing at the crossroads, believe I'm sinking down.

Meet Me in the Field Behind the Dynamo

1100 Rock and Roll Blvd.: Downstairs, past Motown motor James Jamerson's upright bass and Elvis Presley's Smith & Wesson, a familiar green road sign catches the eye. Austin City Limits. "Great Music. No Limits," reads the PBS postcard's slogan. Slide into the comma-shaped exhibit, guarded by pages from the show's 1974 proposal ("The musicians will play well ..."), and there's Alejandro Escovedo flashing on the flat-screen TV. Somali son K'Naan reels next: "She shot me, she shot me, bang bang, she shot me." Break out the King's .38!

Scott Newton, Austin City Limits staff photographer, dukes it out with the 20-minute highlight montage, iconic images of Bill Monroe, Manu Chao, and Etta James vs. clips of Roy Orbison, the Flaming Lips with Beck, and the Dixie Chicks – all hanging above ephemera that includes set lists from Leonard Cohen and Robert Plant (Zeppelin B-side "Hey Hey What Can I Do"). Tourists stream steadily into the room, transfixed by the video, pronouncing names for their children pawing at the pictures on the wall ("Elvis Cos-tel-lo"). Neil Young, in a 1984 taping, barks "Down by the River."

U2 label rejections preserve RSO Records executive Alexander Sinclair's A&R acumen, while a hate, hate, hate letter from Fiji and Keith Richards' red half-shirt from Altamont pit the Stones against the Beatles, represented by John Lennon's first passport, Wings' 1975 Grammy for Band on the Run, and George Harrison's sports-car 1962 Rickenbacker. Father? Yes son. I want to kill you. Mother, I want to ... plays in your head while taking in Jim Morrison's valentines to his mother. A letter dated 1970 from the Florida Probation & Parole Commission addresses Morrison's father, a Navy rear admiral, about the Doors frontman's indecent exposure, but the two-page response from George Morrison doesn't take the bait ("I view his success with pride"). A wall of Jimi Hendrix's childhood watercolors redefines psychedelia. 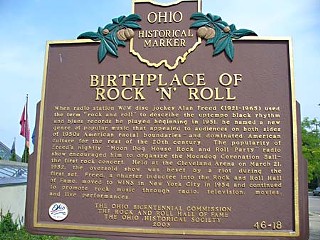 Joy Division constricting into New Order, Johnny Ramone's downstroke-sanded Mosrite Ventures II guitar, Joan Jett's Jaguar XJ-S – there isn't even time for the Hall's next two floors, housing fuselage wreckage from Otis Redding's last flight and a telegram from comedian Redd Foxx to Jackie Wilson on the occasion of the soul pioneer's ultimately fatal, decadelong coma: "Get up niggah, we need you and love you and screw you." The acid blotter in Janis Joplin's glass case has been removed, the Hall's 25,000 items yielding only 4,000 on display. Upstairs, bricks in The Wall offset the spire-bound special exhibit "From Asbury Park to the Promised Land: The Life and Music of Bruce Springsteen." The Long Center's local screening two weeks ago of Springsteen's new DVD set, London Calling – Live in Hyde Park, suddenly seems 2-D.

Notebook after notebook after spiral-bound notebook of original, handwritten lyrics, including "Prove It All Night #2" with completely different verses and Patti Smith's co-write of "Because the Night"; Springsteen's Oscar for "Streets of Philadelphia"; Born in the U.S.A.'s blue-collar LP garb; and personal mementos from every last stage of the Boss' life and career dwarfed three-and-a-half decades of personal museum stalking. My parents took me to see the original Treasures of Tutankhamun tour in the 1970s. "From Asbury Park to the Promised Land" provides glimpses of riches to rival Howard Carter's 1922 archaeological supernova:

"Can you see anything?"

"Just a Little Bit," directed by its Strat-handed guitarist at Messrs. Beck and Guy, hiccups a 1950s jukebox breakout ready for modern-day speakeasies, and as brassed by saxes Greg Piccolo (tenor) and Doug James (baritone) – and beat to heaven by band mainstay George Rains – it held its own until Barton stepped to the stage-right microphone to duet PBBF plaything "I Miss You So." After her takedown of new LP mate "Come Love," the club's Legend was on center mic in a black Hawaiian shirt and white cowboy hat, fired up. Only Guy's Cheshire cat act atop the Crossroads main stage two days later amped more Mount Rushmore.

No mistaking this Western's hero, however, Vaughan giving Barton bite-down and Ballads/Favorites' "Wheel of Fortune" a spin before set closer and forever Strange Pleasure open sesame "Boom-Bapa-Boom." Eric Clapton's left-hand man – producer of God's forthcoming release – Doyle Bramhall II appeared back behind the VIP cordon-off, talking to Cesar Rosas' other half, Lobo David Hidalgo. Austin trumpet mercenary Ephraim Owens stood behind us. To the nightlong audience chorus of "Who is that woman!?" Barton, in the encore, belted another one for her long-ago Antone's lap dance, Muddy Waters. Previous Jimmie Vaughan disc high Do You Get the Blues? (2001) provided a main course on "In the Middle of the Night," braised by Barton to a crimson crisp. Last run "D/FW," from the Vaughan Brothers' Family Style, freed us as though to the tune of a 1980s B.B. King film commission, "Into the Night." 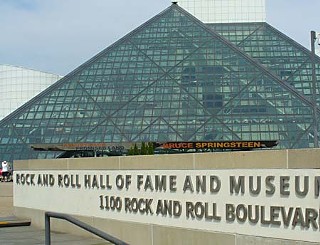 I Shot the Sheriff

Doyle Bramhall II opens his set as Faded Boogie, standing next to a mountain before ceding the coliseum PA to Gary Clark Jr., whose monstrous roar through Josh White's "Jesus Gonna Make Up My Dyin' Bed" blows a Toyota Park gasket. It's fixed by the time Sheryl Crow joins the band, in turn dressed up by the guitar set's Ike & Tina Turner, Susan Tedeschi and Derek Trucks. The host's only guest spot until his headlining set five hours later puts everyone but the departed Billy F. Gibbons in their places.

Crossroads 1 novice John Mayer (see "TCB," June 11, 2004) faces off with kit killer Steve Jordan and the Who bassist Pino Palladino in Three Horsemen of the Apocalypse mode, slowing only briefly on Bill Withers' "Ain't No Sunshine," before a scathing Jonny Lang, Buddy Guy, and Ronnie Wood musketeer themselves to one-up him on an instrumental cover of "Miss You," its Rolling Stone sizzling slide on his home turf. The Tedeschi/Trucks Delaney & Bonnie-like juggernaut comes anchored by Warren Haynes, because Gregg Allman's hep C liver transplant forced the Allman Brothers to cancel their Crossroads debut. Haynes' slide-mongering reminds the assemblage that it was he who replaced Duane Allman in the Georgia peaches' band of the 1990s before Derek Trucks slid into the spot next to Haynes a decade later. Era staple "Soulshine" fills the Allman jones, but Los Lobos' Rosas & Hidalgo work their Dead-inspired dark magic before bringing on Johnny Winter to paint Hendrix's "Red House."

"Are you sick of the sound of the electric guitar yet?" asked Crossroads commander Eric Clapton at the outset of his 90-minute proof of sovereignty, which segued into him and early afternoon showcasers Robert Cray and Jimmie Vaughan backing B.B. King for a finale.

Thunderous openers "Crossroads" and Derek & the Dominoes appropriation "Key to the Highway," a Caribbean mix on "I Shot the Sheriff" to make Bob Marley roll over and tell Peter Tosh the news, Jeff Beck's slide solo on "Shake Your Money Maker," and Steve Winwood's co-Strat navigation through Traffic's "Glad," Buddy Holly's "Well, All Right," and his original Electric Ladyland stopover on "Voodoo Chile" prompt their own slight return from Clapton, whose every solo chiseled sonic marble.

"This was going to be the last [Crossroads]," he announced after "Dear Mr. Fantasy" rebottled its genie. "But now, somehow I don't think it will be. I hope that's all right." 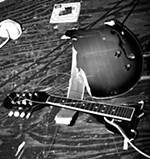 Playback: Lights Out for Jovita's
Run-ins at Jovita's, thieves in the night at Mohawk, and Lickona's feeds off of 'Austin City Limits'