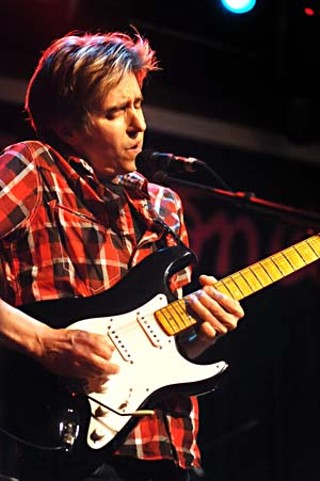 Third Stone From the Sun

Like a real-life version of Guitar Hero, Eric Johnson paid tribute to Jimi Hendrix at Antone's last Thursday with a 75-minute set of idol worship and flawless astral flares, as part of a benefit for the Palmer Drug Abuse Program. Backed by Double Trouble bruiser Chris Layton and bassist Scott Nelson, the local ringer balanced living room casualness with scholarly apprenticeship in his rendition of "Like a Rolling Stone," modeled after Hendrix's iconic 1967 Monterey Pop Festival performance. Johnson cut otherwise faithfully rendered versions of classics like "Manic Depression" and "Fire" with his own remarkably clean solos, most notably the three-minute meteor shower raining over "Bold as Love," while closing encore "Are You Experienced?" left no doubt.

After the Gold Rush

The digital Texas Punk Treasure Chest offers the next best thing to crate digging at old Drag bunker Sound Exchange. The locally based blog posts rare artifacts primarily from the Austin and Houston hardcore scenes of the 1990s as free downloads. Recent entries include Rise Records’ 1994 collection Live at Emo’s, unreleased recordings from Glorium and Storm the Tower, and early singles from At the Drive-In and Direction, a straight-edge band led by Transmission Entertainment’s Graham Williams. A benefit for Houston punk staple Alex Arizpe, featuring the Tie That Binds, Latch Key Kids, and a reunited Blueprint, goes down Friday, June 25, at Red 7, with site co-founder Mark Twistworthy spinning gold. Dig in: www.texaspunktreasurechest.blogspot.com. Ghostland Observatory's rise to national prominence traces back to a halftime performance for the Texas Rollergirls in July 2006. That's where the local electro-glam duo first caught the attention of C3 Presents' Charles Attal, leading to a last-minute booking for Austin City Limits Music Festival later that year. Since 2002 (see "Electric Skaterland," Sports, Nov. 27, 2009), the Austin-bred women's Roller Derby revolution has skated to a rock & roll soundtrack, with acts as diverse as the White Ghost Shivers and Honky performing at every match. Given the emergence of more than 400 Roller Derby leagues worldwide, the Rollergirls' bouts have also become a coveted stop on national tours like the 2006 double bill of the Spits and the Motels. "We're very DIY," stresses longtime booker Virginia Evans, a molecular biologist better known as veteran blocker Cheap Trixie, who's currently recovering from a broken ankle. "We almost have to befriend the band to get them to play at the price we want, but it's a guaranteed crowd of anywhere from 500 to 1,500." This season, the first to be programmed by Evans' Hustlers teammate Jennifer Carver, alias Lady Stardust, has already featured local favorites Woven Bones, the Happen-Ins, and Shapes Have Fangs, with afterparties spilling over to Beerland. On Sunday, June 27, Pataphysics lace up at Playland for an interleague bout between Baltimore's Charm City Rollergirls and the Texecutioners, who'll also be collecting donations to help fund their trip to regionals in Lincoln, Neb. For a full preview, scope "This Charming Wham," Austin Chronicle Sports blog the Score, June 24.

The Mighty Rearranger Robert Plant tackles "The Only Sound That Matters" by Austin's bygone Western romantics Milton Mapes on his new solo album with Patty Griffin, Band of Joy, which drops in September. "There's something really cosmic about the whole thing," surmises former Milton Mapes singer Greg Vanderpool, not long after confirming the news with Buddy Miller, who produced the album and mastered Milton Mapes' 2001 debut, The State Line. Vanderpool's new venture, Monahans, issued "A Memory of God" on Tuesday, the fourth stellar installment in a series of free monthly singles inspired by the scenic seclusion of his friend's ranch in West Texas. Monahans headline Club de Ville with Telegraph Canyon on July 30, just four days after Plant & the Band of Joy's sold-out engagement at Stubb's. "It'd be nice to thank him in person," relates Vanderpool. www.monahans.net.

Last Friday, KUT Radio posted the job opening for the manager of the Cactus Cafe, offering a negotiable salary of $46,000, a near-20% increase from that of current Senior Food Service Supervisor Griff Luneburg. According to the posting, the employee will "identify solutions to artist and audience service issues" and "develop and implement revenue initiatives to sustain the Cactus," among other duties. As tackled last week by the News desk, the University of Texas-Austin is attempting to block the Chronicle's May 17 open records request for e-mails between KUT staff and UT's primary decision-makers from Dec. 1, 2009, onward. Stay tuned.

Sixth River Architects filed suit on June 15 against Direct Events Inc. CEO Tim O'Connor and executive partner Doug Moyes, the Statesman reported on Monday. The local firm claims it's owed more than $110,000 for its work on the new Backyard and renovation of the Austin Music Hall. O'Connor could not be reached for comment.

On a related note, former Direct Events manager and current Texas Performing Arts Assistant Director Tim Neece has been named the new general manager of the Austin City Limits studio at Moody Theatre. Contrary to previous reports, the 2,750-capacity venue (roughly the same size as Bass Concert Hall) will not be exclusively booked by Live Nation and is scheduled to open in January. "Obviously there's a lot of competition," says Neece, who previously managed the Arc Angels and Christopher Cross," but the idea is to create a great space where everyone wants to be."

Local country chameleon Jesse Dayton is trading in his Captain Clegg character for Reverend Roy, a Cajun drug lord in The Sinner, a short film currently being shot in Austin and pitched to Showtime as a weekly series. "The script is pretty bulletproof," cracks Dayton, who's also producing Michael Des Barres' new soul record. "There's a lot of Frank Miller-looking set stuff but with a lot of depth, too." Dayton's "One of Them Days" can be heard in this Sunday's episode of True Blood on HBO. 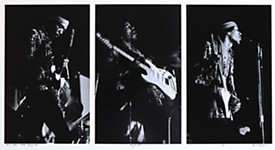