"Day turned into night during that song," surmised keyboardist Nancy Whang after the new lite beer anthem "Drunk Girls." Such was the power and charm of LCD Soundsystem's perfectly paced 90-plus-minute sold-out set at Stubb's on Tuesday. Over the last five years, everyday hero James Murphy and his rotating cast of misfits have been rock stars in reverse, debuting with a game-changing double album that ushered disco into the new millennium even as the ever-self-effacing Murphy laughed off his own midlife crisis and relevance through set highlights "Losing My Edge" and dual-bass banger "Daft Punk Is Playing at My House." The band's two most recent LPs, 2007's Sound of Silver and the recently released This Is Happening, have watered down the formula, evident in the lackluster "Pow Pow" and opener "Us V Them," but in a live setting the self-coined North American scum still works miracles. How else do you explain the primal efficacy of set closer "Yeah (Crass Version)," a 10-minute tantrum that builds into an aggressive techno rave, complete with fog machines, LED screens, and lasers? "All My Friends" offered Krautrock perfection, powered by human drum machine Pat Mahoney, while "Movement" burned with no-wave velocity. There was even a streak of sincerity via retro-lament "I Can Change." The only disappointment was encore closer "New York I Love You," a faux power ballad fit for Ol' Blue Eyes. Even that was saved by a knowing transition into Jay-Z's "Empire State of Mind." 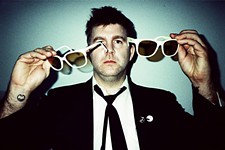