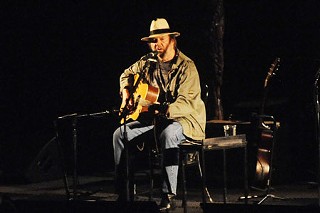 
Neil Young doesn't even pretend. "This song is for the little people," was the only address the 64-year-old Northern California singer-songwriter made to a sold-out Bass Concert Hall Saturday night, just past the halfway mark of the 90-minute solo performance. "People too small to come" (to the show, presumably). The song, "Leia," a few piano chords and a heartfelt lyric, represented decades of signature Neil Young: unfettered, unreleased, unapologetic. If Young in his straw hat, two shirts, and blue jeans never once thanked his fawning flock, the guitarist's body language onstage remains one of engaged accessibility. When Young shakes his electric guitar, he empties it on the audience. Besides, for personableness he'd brought along opener Bert Jansch. The 66-year-old Scottish folk pioneer brogued mostly unintelligible while introducing Irish traditionals, blues, and closer "Carnival," but the thick and thorny tangle of simultaneous bass and rhythm on the acoustic guitar throughout his 45-minute warm-up was a one-man Pentangle reunion. Young, meanwhile, alone on what looked like a detail from Willie Nelson's Luck, Texas – originally a Western movie set – as triangulated by two pianos and a pump organ on a riser, plus lighting from 10-foot-high campfire-colored luminous strips, spoke with 18 selections, nearly half of them new. Knees flapping on acoustic kickoff "My My, Hey Hey (Out of the Blue)," Young contorted his torso upward in hitting the note upon which rests the word "gone" in the line "and once you're gone, you can't come back" as if to punctuate both the melody and his overall mindset. "Tell Me Why" and "Helpless" followed in similar fashion, the headliner washing out his harmonica in a glass of water on the former, then blowing it like a jazzman looking for his sweet spot. He found it on the triptych of debuts next: "You Never Call," a heavenly dialogue with Young's recently departed archivist Larry Johnson; "Peaceful Valley," an ode to conquering the West; and "Love and War," the only two subjects known to man. "Down by the River," a Crazy Horse of electric abrasion, punctuated that trio and set up one of the evening's most stunning runs of verses, "Hitchhiker," which was itself punctuated by a gripping "Ohio." "Sign of Love" also shook the temple anew, "After the Goldrush" hushed a town full of hecklers ("play what you want, Neil"), and "Cortez the Killer" and "Cinnamon Girl" back-to-back collapsed the Bass Concert Hall into a pile of rumble out of which a short, sweet, straight-ahead reading of "Old Man" as the first of two encores restored order to the universe – deconstructed once again in amplified sign-off "Walk With Me." If it's talk you want, try the Weather Channel. 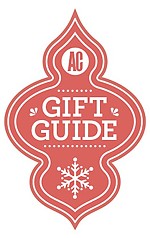 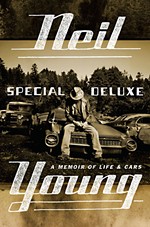