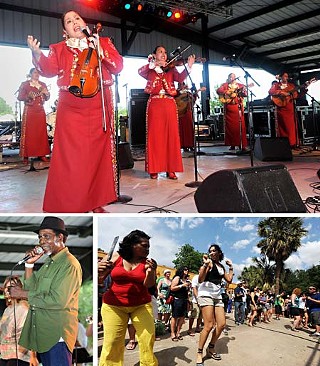 During his workshop at the Niños Rock Pachanga stage on Saturday, David Garza outlined his four keys to songwriting: accordion (provided by Charanga Cakewalk's masterful Michael Ramos), lyrics, rhythm, and – wait for it – "smiles." There was no shortage of the latter at Pachanga Latino Music Festival's breakthrough third outing, once again at Fiesta Gardens, where Austin's great pop chameleon proved not only ready for his own PBS children's show but also duetted with Suzanna Choffel and joined Vallejo for what sounded like "Paradise City" translated to rock en Español. The afternoon was dominated by big band ensembles: San Antonio's exquisite all-female Mariachi las Alteñas, neighboring ninepiece and urban rhymesayers Bombasta, and Tucson's Y la Orkesta, which combined Roaring Twenties mambo, Farfisa organ Tex-Mex, and spaghetti Western noir behind leader (and Calexico collaborator) Sergio Mendoza. Then came Austin's Tortilla Factory. Formed in 1972, the multicultural and -generational 12-piece act defined crossover appeal, elder statesman vocalist Bobby Butler swiftly transitioning from Tejano and salsa to a sweeping, soulful cover of "Stand by Me" as band founder Tony "Ham" Guerrero looked on with proud approval from his wheelchair. Judging from its combustible set, Austin's Amplified Heat should take a cue from MC5 and cut its next album live onstage. Other highlights included the rich Spanish balladry of Willie Alvarado, Hacienda's rousing Chicano soul, and Girl in a Coma's raw covers, including Ritchie Valens' "Come On, Let's Go," but the evening belonged to Grupo Fantasma. Swelled to a 15-piece ensemble for the occasion, the Latin juggernaut delivered what will be remembered as one of the year's best local performances, as guested by pianist Larry Harlow, who pounded the keys with feverous abandon during some of his choice Fania Records cuts. "You're so lucky; we don't have this in New York City," Harlow surmised. "Austin es música."

"Students do NOT support this plan," wrote John Woods, a graduate school representative in UT's Student Government, in response to the announcement of a partnership between the Cactus Cafe and KUT made by Vice President for Student Affairs Juan González last Wednesday. "We are pleased we get to keep the Cactus, but tired of being manipulated for the purpose of press releases."

Again the UT administration is drawing criticism for overstating the involvement or support of the student body in its decision to repurpose the campus landmark. While González received a few letters of support from elected student officials, most notably Student Events Center President Andrew Nash, local grassroots organization Friends of the Cactus Cafe, which drafted a 25-page proposal to preserve the venue and raised more than $32,000 to that end, also expressed disappointment at the decision. "We feel that the plan that was announced does not meet the guiding concepts that were established in the Cactus Conversations," relates FOTCC's Wiley Koepp. More specifically, KUT's draft proposal doesn't currently include increased student involvement "through student artist-in-residence and internship programs, and employment opportunities."

"It's hard to have a clear response to it because there's not really a clear model," reasons local songwriter BettySoo, one of more than 70 artists, including Lucinda Williams and Hayes Carll, who signed a petition in favor of the self-operating model under the venue's current management, prior to the announcement.

In the same way C3 Presents helped revitalize Austin City Limits, KUT has the potential to expand the scope of the Cactus and broaden its appeal to undergraduates and beyond, but how the station plans to do so remains undefined. With two months until the changeover in August, the local NPR affiliate has no business model in place and a host of issues left to address. For example, what happens to the venue if either KUT or the Texas Union's bar operations fail to turn a profit?

While KUT has pledged to maintain the fundamental character of the Cactus, it's worth noting that the station recently laid off its most pivotal link to the venue's storied past, Walter Morgan, the engineer and catalyst behind KUT's Live at the Cactus series, which were co-produced by longtime manager/booker Griff Luneburg.

"It's just unreal," surmises Morgan, adding that KUT Programming Director Hawk Mendenhall collected the archived tapes he had stored in his office since 2001 after Jan. 29. "I'm sure KUT is capable with or without Griff, but I certainly feel like he has earned his keep."

No Sleep 'Til Brooklyn As evidenced by Bryan Ray Turcotte's Fucked Up + Photocopied, poster art marks the path of least resistance to any worthwhile DIY punk outing. Fitting, then, that Timmy Hefner's Chaos in Tejas expands this year to include an exhibit from Turcotte and Dead Kennedys illustrator Winston Smith at United States Art Authority (2906 Fruth), opening Thursday with a soundtrack provided by Mammoth Grinder, Obliteration, and Sonskull, along with a showing from Jack Barfield and Paul D'Elia at the Parlor (4301 Guadalupe), open now through Sunday. The annual punk rock circus also edges its way into daytime, with matinee bills all weekend at Beerland and Trailer Space, as well as a Saturday set at End of an Ear, followed Sunday by a closing party with Attack Formation for Tim Kerr's exhibit. For a full breakdown, scope "Music Listings."

Time Warner Cable has elected not to renew its contract with Austin Music Partners, the private entity responsible for ME Television. The cable network, which broadcasts the local 24-hour music network throughout Austin and 40 surrounding cites, has expressed interest in proceeding on different terms, but if an agreement can't be reached by August 31, the channel will be off the air when the contract expires in 2011.

Michele Murphy, founder of Austin's Natural Ear Music School, has been elected mayor of Liberty Hill, a small suburb 30 minutes northwest of Austin with about 1,500 residents. "The town had stagnated to the point of two or three bullies running it, and they needed new blood," relays Murphy.

Local pop triumph Voxtrot (see "The New Rage," May 18, 2007) is breaking up after its Goodbye, Cruel World tour, which stops at Emo's on Thursday, June 3, splintering into a flurry of side projects including Sparrow House, JC & Co., and International Waters. "I love Austin, but I tend to feel pretty stagnant here," relates lead songwriter Ramesh Srivastava.

Through his founding of Instruments for Peace and involvement in the Crawford, Texas Peace House, local bassist Nick Travis bridged his passions for music and anti-war activism. Travis, who backed Van Wilks and Miss Lavelle White, died Monday morning of natural causes. He was 55. Funeral services are pending.

Blind Willie Johnson's eternally haunting "Dark Was the Night, Cold Was the Ground" was included on the Voyager Golden Record, launched into deep space in 1977, and yet 65 years after his death, the Texas slide guitarist's burial site bears no commemoration. To that end, Momo's hosts a tribute and benefit Thursday, June 3, with locals Jon Dee Graham, Scott H. Biram, and Ruthie Foster, among others, with proceeds used to purchase and erect a cenotaph at his grave site in Beaumont's Blanchette Cemetery. www.blindwilliejohnsonfund.com

NSFW: The Strange Boys' "Be Brave" got a serious upgrade courtesy of Kate Moss. The supermodel stripteases her Topshop clothing line to 96 seconds of the locals' latest garage nugget, shot against a backlit canopy by fashion favorite Nick Knight. The clip has already garnered more than 30,000 views and can be watched at austinchronicle.com/thenextepisode.