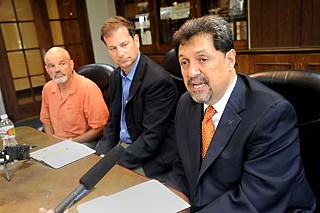 "I believe it's a perfect match," beamed Vice President for Student Affairs Juan González in his announcement of a new partnership between the Cactus Cafe and KUT Radio at a closed press conference in the Texas Union on Wednesday afternoon. "We've got here an organization that has deep relationships with the music industry, songwriters, that knows how to run a sound business, and has wonderful support in the community for its ongoing operations. This is an exciting, absolutely new chapter in the Cactus Cafe. ...

"I think that very reasonable, fair-minded individuals will applaud this change and celebrate it."

At this time, the partnership is essentially a gentleman's agreement, an informal understanding that KUT will host approximately 200 performances a year in the venue while the Union will be charged with maintaining bar operations, with potential profits (or losses) split accordingly. González said student fees will no longer subsidize the venue. While the local NPR affiliate doesn't have a business model in place, the station has pledged to hire a full-time venue manager.

"I'm actually not that concerned about the bottom line of it right now, because we have so much to bring to the table," said KUT station manager Stewart Vanderwilt.

More problematic than this final solution is the process that led to it. In early December, University Unions Executive Director Andy Smith made the closed-door decision to shutter the Cactus and cut UT's informal classes without any student or faculty input, a move that proved not only how little the university valued those two cultural institutions and their impact on the surrounding community but also evidenced a desire to make hatchet-job budget cuts instead of exploring more meaningful solutions.

Smith spent the next two months tweaking the announcement with González before presenting it to two members of the Union board for a rubber-stamped approval and releasing it to select press outlets at 5pm on Friday, Jan. 29. What's transpired since then has been financial misinformation and near-constant spin-doctoring, giving the appearance of public input while ramming through its agenda undeterred. The KUT model wasn't even one of the three original proposals submitted by the Union board for González's consideration.

That González delayed his decision until the semester break – both The Daily Texan and the Cactus are closed until June 3 – and handed another executive decision instead of allowing for a student referendum on the matter emphasizes just how little the administration learned through this ordeal. And this is merely the tip of the iceberg for UT's budget woes (see "Clouds Over Campus," News). Like Stevie Ray Vaughan and Charlie Sexton, David Murray was an Austin guitar prodigy who sneaked in the side door of the old Soap Creek Saloon to sit in with Paul Ray & the Cobras. "They used to joke about putting me inside the kick drum case to get me inside the club," chuckles Murray, an Austin resident since 1968, who attended the opening of the original Antone's in 1975. "I was tutored and mentored by the best of the best in every regard of the field, from musicians and club owners to sound engineers and managers."

While he never quite outgrew the "Little" tag that accompanied his early career, Murray went on to play with Marcia Ball, Kelly Willis, and Monte Warden, leading to three separate appearances on Austin City Limits, and since 1995, he's owned and operated his own recording studio. It's that history with the local music scene, along with his experience as a homeowner, that landed Murray a job last week as the city's sound engineer, a new position in Economic Growth and Redevelopment Services originally recommended in the Live Music Task Force's 2008 final report. He essentially fills the role of the "accountable official" in the Austin sound ordinance, responsible for code compliance and approving new permits (or renewals) for live music venues. "A big part of what we want to do is community outreach," states Murray. "It's already apparent to me that there's a lot of misinformation about the noise ordinance."

His duties could expand with time since the LMTF also called for the establishment of a "sound engineer certification program" that would require outdoor live music venues to employ city-approved engineers for every performance, and a draft version of the accompanying test has already been circulated. "There's some fear that it's got a whole other layer to the process, but I don't think it's going to add any undue burdens on outdoor music venues," says Don Pitts, music program manager and Murray's direct supervisor. "I think it will help alleviate a lot of the issues on both sides."

Take It to the Limit

C3 Presents' "get" of the Eagles for the 2010 Austin City Limits Music Festival is big enough to fill Darrell K. Royal-Texas Memorial Stadium, and when you factor in Phish, not to mention third headliner Muse, which packed Stubb's during South by Southwest, you could fill Zilker Park three times over – not that there are any three-day passes left. Overall, the festival's ninth lineup resembles a greatest hits package from C3's local booking empire, collecting recent sell-outs at Stubb's (Vampire Weekend, Slightly Stoopid, Norah Jones), Emo's (Beach House), La Zona Rosa (Yeasayer), Antone's (Miike Snow, the Mountain Goats), and the Austin Music Hall (the Flaming Lips), with a few surprises (the reunited Strokes, Monsters of Folk), returning ACL faves (M.I.A., Band of Horses, the Black Keys), and SXSW 2010 breakouts such as Local Natives, the XX, the Very Best, and Dan Black. OTR is particularly pleased about a makeup appearance from Sonic Youth, the neo-soul romanticism of Mayer Hawthorne, UK art-punks Foals, and the guaranteed Sunday-morning-coming-down redemption of the Relatives, while the local delegation remains characteristically strong with Spoon, the Sword, Ryan Bingham & the Dead Horses, Balmorhea, Carolyn Wonderland, and U21's Speak. Conan O'Brien's Legally Prohibited From Being Funny on Television Tour stop at a sold-out Austin Music Hall on Friday resembled a comedic version of Elvis' '68 comeback special. The late-night host donned Eddie Murphy's purple suit from 1987's Raw, inflated the bat from Meat Loaf's Bat out of Hell tour, and riffed on Austin ("You can't institutionalize weirdness") and his eight steps of recovery (his favorite, No. 4: "Blame everyone else around me"). The 90-minute set featured slightly tweaked versions of his Tonight Show trademarks, like the self-pleasuring panda and Chuck Norris rural policeman handle, complete with a commercial break from sidekick Andy Richter that trashed Dirty Martin's with more punch lines than Triumph, the Insult Comic Dog's overdubbed video segment. Though opener Reggie Watts could've passed for the living embodiment of South Park's Chef, layering and looping his vocals to sound like all five members of the Temptations, and Austin's Charlie Sexton romped through Little Richard's "Bama Lama Bama Loo," it was O'Brien who came out looking like a guitar god. He covered Willie Nelson's "On the Road Again," which morphed halfway through to "My Own Show Again," and took a stab at a solo on "Seven Nation Army." "We've done 23 dates, and this is the first guitar string I've broken," O'Brien quipped before his "40 Days" encore revival. "That's Austin for you." 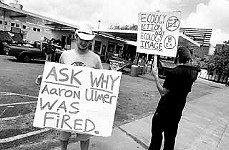 The Education of a Lifetime
Jazz at the PAC