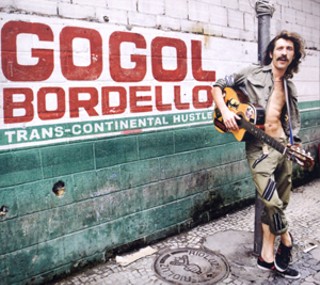 
Portuguese, Italian, French, Spanish, Gypsy, and/or tongues unknown – Manu Chao, Shane MacGowan, Joe Strummer? Eugene Hütz. And for album No. 5 from comrade Hütz's East European blackout – NYC's Gogol Bordello – comeback kid/producer Rick Rubin, American lama. Mostly indistinguishable from 2007's Super Taranta!, which no one mistook for 2005's high powered Gypsy Punks, Hütz and Rubin's lean, punchy Trans-Continental Hustle opens already drunk on the dizzying one-two of exotics "Pala Tute" and "My Companjera," so that "Sun Is on My Side" has to bake just for everyone to catch their breath in preparation of the blind Staten Island salute "Immigraniada (We Comin' Rougher)." "Last One Goes the Hope" buoys the middle third atop the bar, placeholder for acousti-punk tango "In the Meantime in Pernambuco," new greatest gauntlet. Penultimate "Break the Spell" doesn't. Do the Hustle. 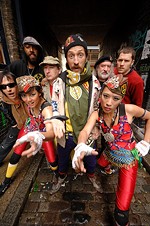