A debut (Everything All the Time) and sophomore smash (Cease to Begin) 19 months apart means the other flip-flop had to fall sooner or later for Band of Horses, and Infinite Arms fumbles its Birks like a weary hippie. First off Sub Pop for Sony, disc three opens in service of the sound of modern melancholy – reverbed vocals – for the ingratiating sad sackery of "Factory," which sets up the rapturous rock cascading through "Compliments." "If there's a god up in the air," sings/sighs Horse whisperer Ben Bridwell, "someone looking over everyone, at least you got something to fall back on," the song's solo lassoing "Laredo" next, straight out of the Doug Sahm songbook as covered by Hacienda. Infinite high. That's when the organic oils detailing this rootsy palette turn watercolor, fading to the mundane ("Dilly," "Evening Kitchen"), with sequencing not giving material the benefit of the doubt. Choir "ooos" lifting "On My Way Back Home," Dorian Gray's strummy hook on "Older," and finally Wilco-esque rocker "NW Apt." could use more close friends. End note "Neighbor," whose lyrical catch falls to Bartles & Jaymes, lands a far cry from debut sealer "St. Augustine." According to Meat Loaf, two of three ain't bad. 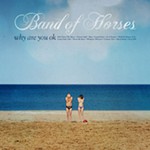 Band of Horses
Why Are You OK (Record Review)